October 12, 2021
By Sponsored by Brevant Seeds - The Heat Advantage

Global demand for canola is hotter than ever. Unfortunately for growers, so is the weather.

Canola is one of Canada’s most widely grown crops, with some 20 million acres planted annually, according to the Canola Council of Canada. Part of the Council’s strategic plan is to boost average yields to 52 bushels per acre by 2025 to meet the voracious appetite of the global food market.

But extreme heat on the Prairies has the potential to cause significant yield and revenue loss for growers in Western Canada. 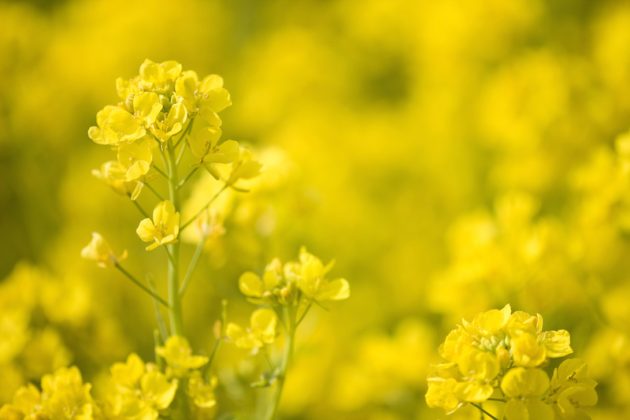 In 2020, heat blast affected nine in 10 canola townships across the country, causing the loss of more than 50 million bushels nationwide and $525 million in revenue, according to data from Global Ag Risk Solutions.

Heat blast – defined as daytime heat of at least 29 C and 17 C overnight – threatens yields by exposing the canola plant to excessive heat during the critical flowering development stage, which can impair fertility and result in missing or misshapen seed pods.

The 2021 growing season was especially challenging, with record-breaking temperatures and prolonged drought conditions in Western Canada prompting Statistics Canada to forecast a drop in canola production to levels not seen since 2012.

“Farmers across Western Canada have had to contend with a lack of rain and higher-than-average temperatures throughout the growing season,” according to an Aug. 30 report from Statistics Canada. “This has exacerbated soil moisture conditions, which were already low at the start of the year.”

Statistics Canada reported “overall plant health in Western Canada was lower to much lower than normal” in 2021, with crops reaching peak health up to four weeks ahead of schedule before a “considerable” decline throughout July. Regarding canola, the outlook was particularly grim. Using satellite imagery, Statistics Canada predicted canola production would fall 24.3 per cent year over year to 14.7 million tonnes.

If realized, that harvest would represent a 30.1 per cent reduction from 2012 levels to 29.2 bushels per acre, despite the country adding 22.2 million harvested acres of canola over the past decade.

Studies cited by the Canola Council of Canada indicate the problem of extreme heat will only get worse throughout Canada, with the southern and central Prairies projected to see particularly sharp increases in average temperatures. According to one of their reports, “the combination of progressively hotter temperatures and more hot days will make yield loss steadily worse.”

To help farmers mitigate the risk of extreme heat, one seed company is automatically applying heat blast protection to one of its most popular canola products.

“The Heat Advantage program, available exclusively with every bag purchased of Brevant seeds Nexera canola, will give canola farmers added peace of mind that their investment is protected up to $100 per acre in the event of excess of heat during the critical period of yield establishment during canola flowering,” says Tyler Groeneveld, Corteva Agriscience’s North American commercial leader for grain and oils.

Farmers in Alberta, Manitoba and Saskatchewan who order Corteva’s Brevant seeds Nexera canola before Oct. 29 will be insured for the 2022 growing season.

“Every bag of Brevant seeds Nexera canola that a grower plants will receive this protection automatically,” Groeneveld says.

The program is underwritten by Northbridge General Insurance and arranged by Global Ag Risk Solutions. There is no application process and no upper limit on how many growers in the three provinces can participate.

“Unlike other kinds of crop insurance, there is no time-consuming reporting process, no trips to the field, no yield measurement, and the farmer gets paid months ahead of traditional crop insurance,” says Grant Kosior, president and CEO of Global Ag Risk Solutions. 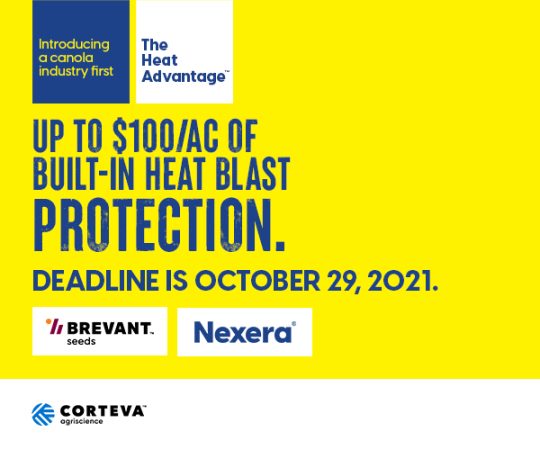 Payments can be made quickly and directly to farmers because Global Ag Risk Solutions uses a data-driven claims process to determine when and where heat blast occurs, Groeneveld explains.

“They use over 40 years of satellite data, so they’re able to assess heat on a six-by-six mile grid everywhere canola is grown across Western Canada,” he says.

Global Ag Risk Solutions gets real-time information from more than 7,500 measurement points throughout Western Canada that monitor temperatures on a daily basis. Compensation for growers is based on how many “heat blast units” – referring to excessive daytime or nighttime temperatures – the canola plant experiences during the critical flowering growth stage.

“There is a tipping point when heat can get excessively hot during that yield establishment period. [This model] establishes what acceptable heat is,” Groeneveld says.

“Then when you start getting into that situation – and let’s hope it doesn’t happen – where the heat can get excessively hot, that’s where it’ll pay out in $5 increments up to $100 an acre when your heat gets quite extreme.”

As an added bonus, Groeneveld says growers can use Global Ag Risk’s real-time climate data to help them make smarter decisions for their crop.

“A grower will see what the coverage is in their specific area, because that can vary from the southern prairie to the northern prairie,” he says. “They’ll have access and full transparency and they’ll be able to track that in season.”

Adding heat blast protection to Brevant seeds Nexera canola is all about “protecting the profitability” of the crop for growers, Groeneveld says, noting that The Heat Advantage program is meant to augment, not replace, other forms of crop insurance.

“The goal is for producers to have ideal heat and moisture and conditions that result in real high-yielding Brevant seeds Nexera canola crops. This program is just providing peace of mind against something a grower cannot control.”