The importance of insect pollinators to both the agricultural industry and the environment cannot be
understated. Their presence is vital, which is why a team of key individuals was organized to conduct research on neonicotinoids and their effects on pollinators last summer. The team included Tracey Baute, a field crop entomologist at the Ontario Ministry of Agriculture and Food (OMAF) and Ministry of Rural Affairs (MRAA), Art Schaafsma, a professor of field crop entomology with the University of Guelph Ridgetown Campus, and Cynthia Scott-Dupree, a University of Guelph researcher.

Their research has resulted in new recommendations for the 2014 planting season, including a new requirement for seed lubricant products. It is their hope that the new recommendations will help to reduce the risk to bees and other insect pollinators in Ontario.

“There are significant levels that can escape those planters,” she says. “And not only do they escape the planter in the immediate vicinity, but they do get picked up and carried with the wind outside these fields, and in particular, onto flowering vegetation downwind including weeds and trees.”

Funding came from all fronts; the Corn Dust Research Consortium (CDRC) provided some, but OMAF put up the majority. A partnership with Grain Farmers of Ontario and further funding through the Canadian Agricultural Adaptation Program helped tie all of the research together.

The CDRC, a North American not-for-profit initiative supervised by the Pollinator Partnership Organization out of San Francisco, asked Baute and her team to answer just two questions. First, they wanted to know what flowering resources bees were foraging on at the time of corn planting. They also wanted to know the efficacy of modified seed lubricant products, in particular, Fluency Agent by Bayer CropScience.

To answer the first question, researchers scouted the perimeter of 18 field sites weekly over six weeks to determine what flowering trees, weeds and shrubs were there. They collected pollen from pollen traps to see where the bees were foraging most. The big “aha” moment, says Baute, was when they realized that the majority of the pollen brought back to the hive comes from flowering trees, including willow, maple, hawthorn, apple and dogwoods, and that this matched the types of trees that were present around the fields.

“This tells us that we need to take all the measures necessary to contain that dust, or at the very least keep it down closer to the ground and reduce the risk of it being blown onto those flowering resources,” he says.

Results from the vacuum bag test indicate that the use of Fluency Agent at the recommended application rate reduced the quantity of neonicotinoid active ingredient escaping from vacuum planter exhaust by 21 per cent. The Health Canada Pest Management Regulatory Agency (PMRA) released a statement in January stating that Fluency Agent is now the only seed flow lubricant permitted for use with corn or
soybean treated with insecticides clothianidin, thiamethoxam, or imidacloprid.

Using OMAF funding, further research was conducted. Baute says they wanted to collect as many samples as possible, while they had the chance. First, they tested soil residue. Preliminary research revealed that the half-life of neonics in Ontario cornfields is likely around 0.5 to 0.75 years. However, it appears that neonic residues accumulate in dry soil dust on the soil’s surface as it is drying. This, says Baute, is a minor contributor to exposure when compared to what is exhausted from the planter itself but is still a risk and requires further investigation. Dust drifting from the fields may be another route of exposure.

Standing water was also tested for residue, and in some cases it contained problematic levels of neonics, particularly after replanting or heavy rains. The pollinator survey also showed some interesting results. The researchers looked to see what types of non-Apis pollinators were foraging in the area and found plenty; Diptera, for one, were present, and in particular, Syrphids, as well as other bee species, including small carpenter bees, mining bees and sweat bees. Bee pollen samples revealed that honeybees will forage on corn and soybeans if nothing better is available to them, but field crops are certainly not their first choice. Finally, during corn pollination, concentrations of neonics were found in the pollen collected by bees, which shows that pollinating corn is sometimes a foraging resource.

The biggest hurdle was finding the co-operators needed for the project – both growers who met the CDRC’s criteria, and willing beekeepers located in close enough proximity to them. The farms they chose had to use large vacuum planters – at least 16-row planters or wider – and had to be fairly sizeable (80-acre or larger fields). Making the project even more challenging is the fact that all 18 fields were planted within a very short period of time. In fact, 13 of the 18 were planted in a four-day window, making for a very hectic few days.

“We were very aware of how thorough we needed to be, how we needed to ensure that we were taking samples correctly and properly storing everything,” says Baute. “The crew really knew the importance of ensuring cross-contamination of samples wouldn’t happen, and proper storage and labelling was critical.”
The study revealed that there isn’t one single solution to the problem, and the responsibility for reducing risk to pollinators is in the hands of all stakeholders.

“And that includes growers, beekeepers, industry, seed trade associations, CropLife and even extension to get the information out and try and make our best effort at reducing the risks for 2014,” she says. “To show that we can reach a balance and hopefully still be able to use the neonic seed treatments, where needed, and protect the bees.”

Read and adhere to the pesticide label and seed tag directions
In order to minimize risk to human health and the environment, follow the directions for use as outlined on the product label.

Use an integrated pest management system
Having a solid integrated pest management system in place is an integral part of insect control. Evaluate fields to see whether or not there’s a high pest risk that warrants using treated seeds. Also, before acting, be sure that if pests are present, they’re at threshold levels. Only use insecticide if absolutely necessary. If it is necessary, choose a product with the lowest effective seed treatment rate. Finally, talk to your seed dealer about non-insecticide treated seed. There are other options available.

Communicate with beekeepers
Good communication is key. Growers should let beekeepers know the timing of their planting, so that beekeepers can take action to protect hives and ensure that they have clean water sources available.

Reduce dust exposure, particularly near pollinator habitat
As previously mentioned, bees and other pollinator insects collect pollen from nearby trees and shrubs, as well as flowering crops and weeds. Growers need to be aware that dust emitted from planter exhaust will land on foraging resources under all types of conditions. Growers should avoid planting treated seed under very dry and/or windy conditions, as pollinator exposure can be increased.

Handle product with care
Growers should avoid generating dust when handling product. For obvious reasons, do not clean equipment near bee colonies or in areas where they may be foraging.

Decrease dust drift by managing plant equipment
According to research, the use of vacuum planters creates insecticide-containing dust, which is released into the air via the planter’s exhaust system. Exposure to this dust poses a risk to pollinators. Growers should try to both reduce and control the dust that is exhausted from planters. Using deflector equipment, for instance, will redirect that dust towards the ground and reduce drift. Clean the fan housing and hoppers regularly between plantings.

Ensure proper cleanup and disposal
Although it might seem obvious, spilled seeds and dust should be incorporated into the soil or cleaned up off of the soil’s surface. Keep treated seed and its dust away from water sources, and do not leave empty bags in the field. Whenever possible, participate in seed bag collection programs. 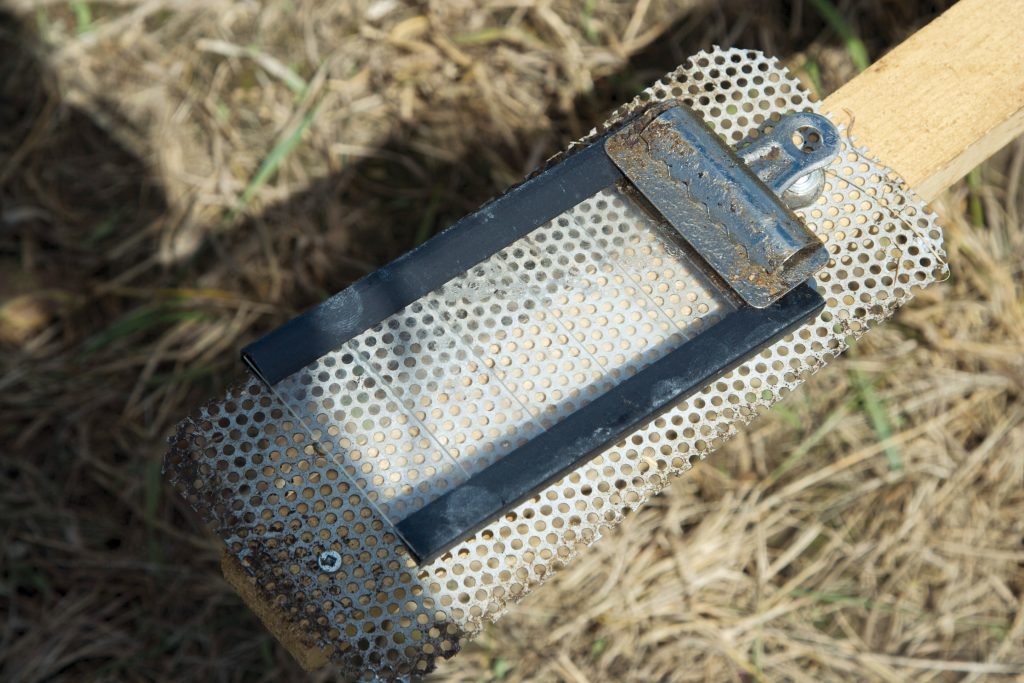 Dust traps were placed both horizontally and vertically downwind from planters to collect settling dust. The importance of insect pollinators to both the agricultural industry and the environment cannot be understated.