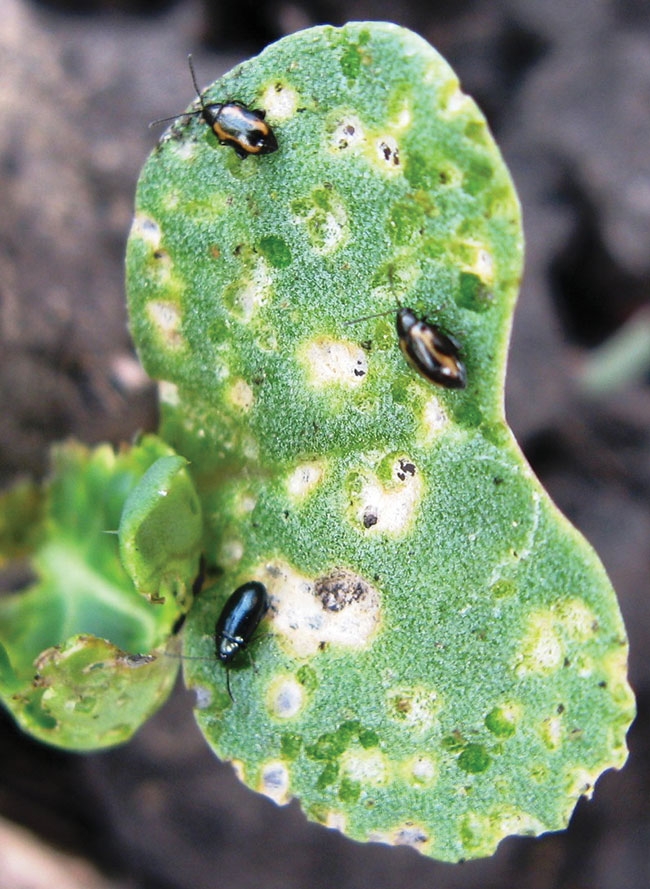 Adult flea beetles on a canola plant in Carman, Man.

Striped and crucifer flea beetles and cutworms have become the main concerns in terms of early season pests for canola producers in Western Canada. If populations set in, they can all challenge a canola crop’s ability to quickly establish a healthy, competitive stand.

Flea beetles tend to be the most prevalent in Western Canada, with infestations occurring across the growing area every year.

“Flea beetles overwinter as adult beetles and emerge in the spring to feed on young canola seedlings,” says Derwyn Hammond, Corteva Agriscience area agronomist with Pioneer seed brand in southwestern Manitoba. “Because the young canola seedlings grow relatively slowly until they develop past the four- to five-leaf stage, this feeding damage can result in both delayed plant development for surviving plants and increased seedling mortality.”

While canola can compensate for reduced plant populations through increased branching and pod production per plant, this feeding damage inevitably leads to more variable maturity within the field.

“Large variations in maturity require compromises in terms of staging for crop protection treatments and harvest operations that can lead to reduced productivity,” Hammond says. “In some cases, plant losses can be severe enough to result in the loss of the crop and reseeding may be required.”

“The biggest effect is when the crop is emerging,” Mayer says, explaining canola growers aim for seven to 10 plants per foot to provide the greatest competition for weeds and to give the crop its best foundation for the growing season.

Cutworms affect the plants underground as plants are germinating and establishing. Flea beetles, on the other hand, feed on canola leaves and stems aboveground when the plants are at their most susceptible. This all leads to bare spots in the field and can affect yield with big enough infestations.

“Canola crops with high insect pest populations are slow to establish and may require foliar insecticide application or reseeding,” Mayer says. “Even if reseeding is not required, often times the crop is sparse, leading to challenges with weed control and harvestability.”

Since early season canola pests hit, and cause the greatest damage, when crops are at their most susceptible during the emergence phase, it is important for growers to be proactive to minimize their impact. This begins with early scouting.

“Scouting should begin as the crop is starting to emerge,” Mayer says, explaining growers should look for inconsistent emergence, plant stems and leaves damaged by insect feeding and bare spots in the field.

Hammond says when scouting for flea beetles in particular, growers should look for two things: the presence of the flea beetles themselves in the field, and feeding damage to the canola plants.

“Early in the year, when temperatures are cool, the flea beetles will emerge from overwintering areas and migrate into the field, so damage may be greater along field edges,” he says. “Once temperatures get into the mid-teens [Celsius] and above, the beetles become much more mobile and will migrate throughout fields, so more thorough scouting is required.”

Avoiding back-to-back canola crops in fields can help limit that readily available food source. However, Hammond says flea beetles are mobile enough to move in from neighbouring fields so growers should not expect crop rotation to provide complete protection.

“As a result, seed treatments tend to be a key tool for mitigating damage from flea beetles in our canola crops,” he says. “The recent introduction of new products, like Lumiderm, with better efficacy against the striped species that has become more prevalent in Western Canada are helping improve the performance of this tool.

Hammond says an action growers can do to help seed treatments work more effectively is to ensure their seedbed is conducive to rapid emergence and early growth. They should also ensure their seeding rate is adequate to achieve an optimal plant population.

“Spreading the flea beetle feeding across higher populations of rapidly growing canola plants helps the plants outgrow the damage and recover more quickly, improving the odds that the insects will ingest enough product for effective control before the action threshold for a rescue treatment is reached,” he says.

He points out that seed treatments designed to protect the seedlings from flea beetles require the beetles to feed on the plants to ingest the product, so minor surface pitting is not cause for alarm. “However, if growers start to see shot holes through leaves, that is a sign that the rate of feeding is starting to exceed the rate of plant growth. At that point, more frequent scouting is required.”

According to Hammond, the action threshold for a foliar rescue treatment application to control flea beetles is when 25 per cent or more of the leaf area has been damaged and the flea beetles are present and still actively feeding. “This last point is important because the new seed treatments control the insects through paralysis, so just because you see a flea beetle laying on a leaf doesn’t necessarily mean the treatment isn’t working.”

Mayer says growers can minimize their risk against damage from early season canola pests by using the best insecticide seed treatment combination available to protect their canola crop as it emerges.

“Canola seedlings are more vulnerable to these pests at the early stage of development up to the four- to five-leaf stage, which usually comes around 35 days after seeding,” says Mayer. “Once canola passes this stage, it is less susceptible to major damage from these insect pests. Early protection is very critical to establish a healthy crop.” 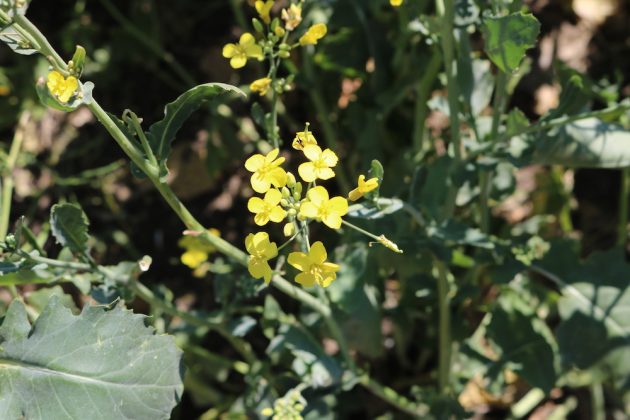 Scouting for flea beetle is part of an integrated pest management strategy.

He adds, while post-emergent spraying is effective, the decision to spray is often made after the bulk of damage is already done to the crop. Some factors growers should consider when deciding if and when to use a seed treatment include:

Lumiderm provides enhanced protection against striped and crucifer flea beetles and control of all types of cutworm by targeting muscle groups in target pests, which stops them feeding faster. It is also safe to non-target insects, applicators and end-use canola product.

Lumiderm is available on the majority of hybrid canola seed sold in Western Canada. When growers select the best canola hybrid for their farm, they can order their seed treated with Lumiderm seed treatment at the same time. Lumiderm is always pre-applied by certified commercial canola seed conditioners using the highest standards for application and seed safety.