Bt corn has been on the market in Canada for over a decade; last year, Bt corn hybrids were planted on 3.1 million acres across the country.

The technology is incredibly, and increasingly, valuable to Eastern Canadian growers, where 2,035,000 of the total 2,295,000 acres of corn were planted to Bt hybrids in 2015. But the ever-present risk of the development of insect resistance to the technology is keeping the industry on its toes.

While resistance hasn’t yet developed in European corn borer (ECB) populations in North America, reduced susceptibility has been noted in some populations of corn rootworm, according to Jocelyn Smith, a research associate in field crop pest management at the University of Guelph’s Ridgetown Campus.

But resistance can be delayed with proper management. In Canada, stewardship of Bt technology takes the form of insect resistance management (IRM) plans, which chiefly involve maintaining refuges to delay the development of resistant insect populations.

Stewardship also entails rotation of traits in the field, as well as the use of stacked traits.

“The most important thing we can do with this issue is educate growers more about the risks they’re taking if they continuously use traits for rootworm,” Smith says. “Their sheer numbers and biology give them advantage.”

This is a message familiar to Eastern Canadian corn producers, and they’ve taken it to heart. The Canadian Corn Pest Coalition (CCPC) – made up of academics (such as University of Guelph researchers), the Canadian Food Inspection Agency (CFIA), the provincial ministries of agriculture, and industry representatives – has been conducting surveys on insect resistance management compliance since the late 1990s.

Until 2012, those surveys were conducted in alternating years with CFIA IRM compliance surveys, but that year, stewardship compliance rates were so high CFIA discontinued them unless “in future, industry practice shifts from using blended refuge.”

But the CCPC’s bi-annual survey continues. “The increase in compliance with refuge area requirements from 2013 to 2015 occurred in all three provinces and now stands at 91 per cent in Ontario, 90 per cent in Quebec and 91 per cent in Manitoba,” the 2015 report concluded.

More education needed
Cindy Pearson, national manager of the CFIA’s Plant Biosafety Office, says the onus is on companies marketing Bt products to educate producers regarding the need for delaying resistance and how refuges work.

“IRM plans are the responsibility of the company to whom the Bt corn product has been authorized, and CFIA receives specific reports from companies that
detail their various activities on that front,” Pearson says.

The survey notes refuge-in-a-bag (RIB) hybrids, which contain the required percentage of refuge seed, resulted in significantly higher compliance rates after their market introduction several years ago. The market has also changed with the introduction of stacked hybrids with multiple Bt traits or modes of action against the insect pests.

“There are currently three traits available for corn rootworm control,” she says. “Where we have growers with long-term use of two of those traits on their own (not in a stacked product), we’ve started to
notice some shifts in susceptibility when we test those populations in the lab.”

This doesn’t necessarily mean producers can see resistance developing in the field, but it’s still a red flag.

“We need to focus on informing continuous corn growers that the three-year limit is important,” Smith says. “We may have had a situation where a grower has used a single trait for years and it’s compromised, so then when they use the stack there’s only one viable trait remaining against the pest.”

Smith also emphasizes monitoring as a key aspect of stewardship. “If you are growing corn on corn, scout your corn late in the season and if there’s less than one beetle per plant you might be able to get away without using transgenics,” she says. “You might be able to hold off on using some of the technology in the following year.”

“And again in season, keep an eye on the pest situation in the crop. For ECB and rootworm, you need to monitor whether they are being controlled by the Bt hybrids or not. If they are not, you need to notify the CCPC and the trait provider,” she says.

As long as they use Bt technology, producers are on notice to use it well. Resistance is in nobody’s interest except the insects. 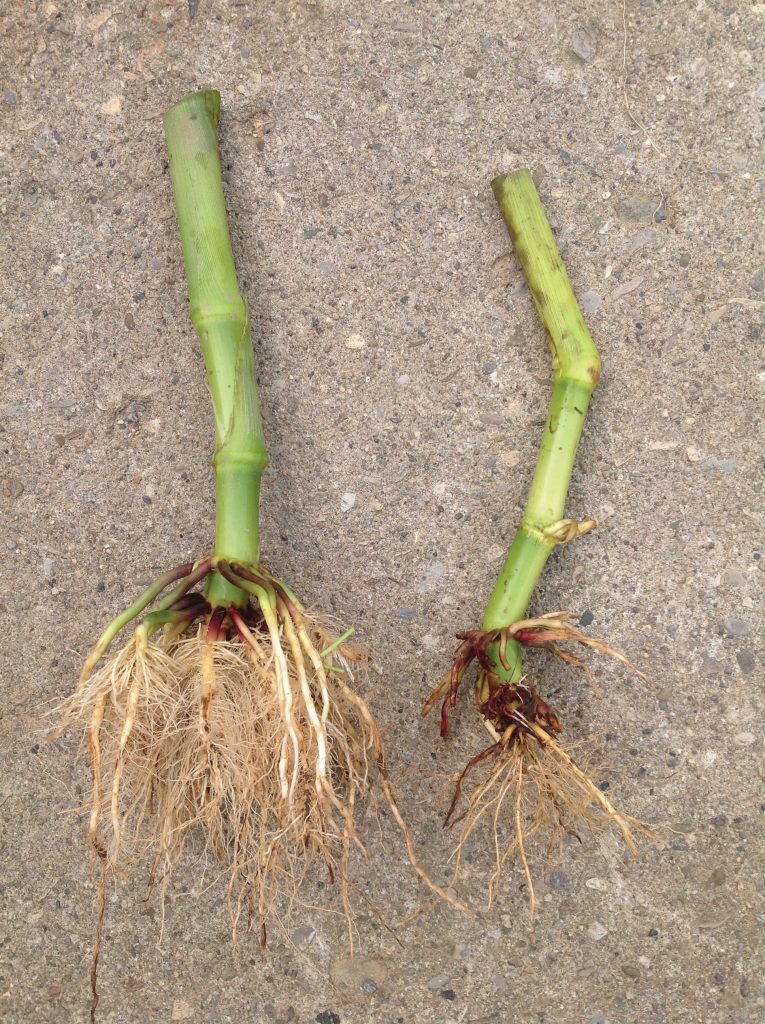 
Related
Protecting a wet crop
Protecting your crops from pests
Protecting winter wheat yield
When it comes to protecting canola from sclerotinia, timing is everything