When protecting and maintaining the quality of your investment, it is critical to address a couple of issues that can be caused by hot binned grain, including the overheating and insect infestation of stored grain in the bin. Both situations can be avoided by the use of small amounts of air, typically 0.1 to 0.2 cfm/bus moved through the grain mass to lower and control the internal bin temperature.

Overheating due to moisture migration
The most common misconception on western Canadian farms is that if the grain is being harvested at the ideal moisture content on a hot and dry day, it may safely go into the bin. However, on hot and dry fall days it is not uncommon for the grain going into the bin to be at a temperature above 20 C and it is actually grain temperature that will cause grief as the ambient air temperatures start to drop going into fall and winter.

At the time the grain is binned, the grain moisture content and temperature may be fairly uniform throughout the bin.

However with time, concentrated high-moisture areas may develop due to outside air temperature fluctuations. As the temperature of the air outside cools the bin inwards from the outside wall, the cooler air at the outside perimeter of the bin will start to migrate downwards. At the same time, the grain mass at the centre of the bin gives off warm air. This warm air moves upwards and creates a convection current within the bin. The cooler air from along the walls moves downward and into the warmer bin centre, and picks up moisture from the grain as it is warming. This warmed air then carries the moisture up the centre of the bin and, as it exits the grain mass at the top centre of the bin, this warm moist air comes into contact with the cold ambient air temperature. The warm air then immediately releases this moisture at the top of the grain mass.

Compounding the moisture problem is the fact that when this warmer air exits the top of the grain mass into the airspace above the grain, it comes in contact with the cold inside surface of the roof, and also creates condensation that will drip down into the top of the grain mass. The combination of warmer grain and moisture at this location provides the ideal situation for grain heating and spoilage to quickly occur.

The reverse of this process may also occur if grain remains stored in the late spring. The warming of the bin walls by the sun on the outside of the bin causes air movement up and into the centre of the bin. High moisture due to condensation now forms at the bottom centre of the bin, which is just the opposite situation to the one mentioned above.
Controlling the grain temperature within the grain mass is important for these three reasons:

Once begun, the progress of the cooling process should be closely monitored through temperature cables. If the bin is not equipped with temperature cables, monitoring may also be accomplished by the old-fashioned method of inserting long steel rods into the grain to test for heating.

In the next edition of The Grain Guardian, we’ll look at the issues of insects, mites and moulds and the low cost of prevention.

For further information, go to www.grainguardian.com. 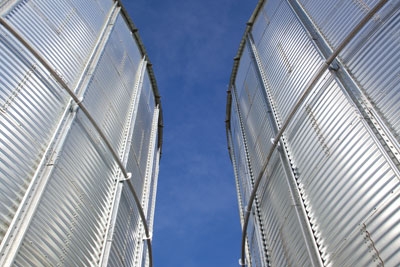 Controlling the grain temperature within the grain mass will help eliminate overheating problems. Critical issues to note in binned grain.