Farming as an industry is no stranger to technology. The site of some of the earliest implementations of technology – from the cotton gin, to McCormick’s Reaper, to today’s GPS-driven tractor systems – farming has always been at the forefront of accepting new ways to do things. But what if those new ways of doing things challenged widely accepted farming practices? That’s the conversation David Dorhout is looking to start via his agriculture-based robot, Prospero.

The Prospero program
Prospero is a prototype of an Autonomous Micro Planter (AMP) that uses a combination of both swarm and game theory.

Once deployed, Prospero calibrates itself to current soil conditions and then uses a sensor array on its undercarriage to see if it or another robot has planted a seed in the spot it’s looking at. Seed spacing is determined by how large a “window” the sensor array gives Prospero to look through. If it does not sense a planted seed, Prospero proceeds to clear the undergrowth, drill a hole and plant one, applying pre-emergent herbicides or fertilizers as needed, before covering it, patting it down and marking it for other robots to detect. Once the seed is planted, the robot then sends out an infrared signal using green or red LED lights that either tells the robots in the system to join it in the planting of an unplanted area, or repels them so that they seek out other areas to plant.

“You can kind of think of the system as the robot is looking for food and the food is unplanted soil,” says Dorhout. “If it finds unplanted soil, then it’s going to call its “friends” nearby to come closer to where they can plant more seeds.”

It’s a system that Dorhout says challenges the fundamental reason certain agriculture processes are followed in the first place: Why is a tractor designed the way it is? Why is everything planted in rows and how was row spacing determined?

“The answers to those questions go back to when people were farming with just their horse as their power plant,” says Dorhout. “The most efficient way to farm with a horse was to plant everything in rows. The rows were then spaced far enough apart so that the horse and farmer could walk between them without trampling the crop. So, the earliest row spacing was determined by how wide your horse was.”

With that system, explains Dorhout, farmers were left with a lot of unused bare, unproductive, ground in between their rows, because the rows were about 36 inches apart. The introduction of the tractor helped farmers plant more crops on the same piece of land by shrinking the row spacing to the width of the tires, about 20 inches. Farming technology is continuing to work on reducing row spacing, but there is a fundamental limit to what can be achieved because, at the core, current farming practices are centred on pulling large pieces of equipment through the field. This equipment is pulled by tractors that require rows – otherwise it will trample the crop.

Designing Prospero with this thought in mind, Dorhout says he started to look at farming from a new perspective, one where farmers could replace their large pieces of machinery by breaking them down into a series of smaller autonomous robots to plant fields not in rows, but rather in a gridline or grids to maximize every square foot of the land. “Making farming decisions at the foot-by-foot level.”

For Dorhout, a self-taught robotics engineer with a master’s in entomology and a long-standing family background in farming, the goals for creating Prospero were based on addressing some of the pressing issues that farmers face today: their long-haul trucker lifestyles spent enclosed in large machinery for the better part of each day; the costs both monetary and environmental associated with fertilizers and herbicides; the inefficient use of land due to a need for cost-effective mass seeding and harvesting; and a desire and need to spend more of their time working on the business and science side of farming in order to make it more profitable.

A better way
The idea for Prospero came to Dorhout while he was working on a research project for his master’s, one in which he found himself having to plant seeds one kernel at a time.

“After you do that for about 3000 seeds you start to wonder if there isn’t a quicker way,” says Dorhout. “But at the same time you think as you’re doing it, this was how people 10,000 years ago did it. You can actually make the farming decisions on a seed-by-seed basis, and that led me to think, wouldn’t it be great if as a farmer you could put that amount of care and thought into each seed you plant? I wonder how much more productive each acre of land could be if we focused on that?”

The benefits
The benefits to such a way of planting work on many levels, from switching farming machinery from single, large manned vehicles to several smaller unmanned robots, to removing some of the dangers inherent in farming from both an equipment and a chemical exposure viewpoint. “Currently, farming equipment is primarily focused on increasing the productivity and safety of the farmer,” says Dorhout, who adds that removing the human risk factors not only makes the farmer safer, but creates potential cost savings and environmental benefits as well.

“Using a small robotic system like Prospero would reduce the amount of chemicals you use in the field,” says Dorhout.

While currently it makes more economic sense for farmers to treat a field than not to treat it, the act of using a small robot could significantly change the economics associated, especially if the robot could mechanically thin a field of weeds, and eliminate the need for herbicides altogether.

With the environmental benefit of not having to spray broadly you also ensure that you’re not killing non-target insects, explains Dorhout, not to mention the resistance management component that ensures less resistant weeds develop as a result of higher direct-applied concentrations or mechanical thinning.

Currently, the prototype that Dorhout puts on display at agriculture shows around North America is the non-commercialized version of Prospero that he sees as being only one of three phases Prospero will eventually be able to master.

“When I built this prototype two years ago, I was really just doing it to show people this kind of technology was possible, and to inspire people and expand the conversation of what ag technology could look like,” says Dorhout. “But there has been so much interest in what Prospero can offer that I’m now moving into a commercial prototype that will first look to the tending or thinning phase.”

With the belief that further research and development could create one single robot that could transition seamlessly between the planting, the tending/thinning phase and the harvesting phase without having to switch between machines, Dorhout says another benefit farmers will see by implementing this technology will be better overall land management.

If during planting the soil isn’t quite dry enough, the robot can wait for conditions to improve before planting the area with a variety of seed that has a shorter maturity. Or if during a hailstorm 10 percent of plants are destroyed, the robot – while in the act of tending the field – would be able to detect a break in the canopy and plant a seed with a shorter maturity so that the productivity of that square foot would not be lost because that plant was killed by the hailstorm.

“Likewise when he’s harvesting, looking at the field, a farmer might say, ‘85 percent of the field is ready to be harvested, some of the corn at the top is drier than some of the corn in the valley where the wind hasn’t been able to blow through and dry down the kernels, so we’ll just pay for the elevator to dry down those kernels,’” notes Dorhout. “But with a small robot that’s given the right parameters by the farmer, those harvesting decisions can be made on a plant-by-plant basis, which, in turn, will help the farmer to capture more profit.”

To date, Dorhout has received good feedback on Prospero’s prospects, especially from the organic farming community, but there’s still a degree of skepticism to be faced. Not in the idea that robotics will be playing a larger role in farming, nor in the feeling that small robots would not work, but in the belief that prototypes such as Prospero will be able to successfully challenge current farming practices and that robots that plant one seed at a time really can be the future of farming. 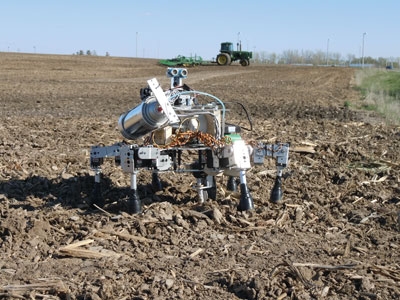 With a background in entomology Prospero looks at farming from a new perspective.