Over 100 years of insight into wheat cropping systems at Lethbridge, Alta., provides a treasure-trove of data for researchers with Agriculture and Agri-Food Canada (AAFC). First cultivated in 1910, a long-term cropping study was initiated in 1911 to look at the impacts of crop rotations on soil productivity, wheat yield and profitability.

In 2014, research scientist Elwin Smith at AAFC in Lethbridge took a snapshot of the last 42 years of the long-term plots to assess profitability and risk of wheat rotations. One of the benefits of the long-term plots is they can reveal changes in soil productivity over time due to production practices. An example was how the fallow-wheat rotation without nitrogen (N) fertilizer was initially the highest yielding and most profitable, but eventually yields declined because the soil was “mined” of nitrogen fertility.

“Unfertilized soil could no longer provide adequate nitrogen for wheat production after fallow,” Smith says in his Canadian Journal of Plant Science article. “The decline in the N supplying ability of the fallow occurred over many years and would not have been observed without this study having run for several decades.”

Smith set up his review of the long-term plots to determine the impact of crop rotation and fertility management on spring wheat yield, if yield changed over the 42 years, and the profitability and risk levels of the crop rotations. The plots were originally established in 1911 with continuous wheat (W), fallow-wheat (FW) and fallow-wheat-oats (FWO) rotation until 1923, and then a fallow-wheat-wheat (FWW) replacing the FWO rotation from 1924 to present.

The soil is typical of the semi-arid region and is an Orthic Dark Brown Chernozem. The treatment plots are large at 0.6 ha (1.5 acre). While the plots are unreplicated, they are representative of the area’s landscape and variability, and the long duration of the study provides extensive replication over time.

The agronomic practices were similar to local production practices. New wheat varieties were adopted as better varieties came along. Tillage was kept to a minimum and used to incorporate pre-emergent wild oat herbicide, but seldom used in fallow over the last 10 years. No post-harvest tillage took place.

Smith analyzed the yield data for all 42 years, and also split the data into the first and last 21 years. The impact of rotation and fertility on yield and profitability was determined.

Changes in yield over 42 years
Smith found that crop rotation, N and P treatments significantly impacted wheat yield when divided into the two 21-year periods. In the first 21 years, wheat yield responded to P fertilizer, likely because the soil was deficient in P from the first 61 years of cropping without P fertilizer. In the second 21-year period, P response was only observed if N fertilizer was applied.

In the first 21-year period, N fertilizer provided a yield response for the wheat grown on wheat stubble phase, but did not after the fallow phase. However, in the second 21-year period, yield was responsive to N in all crop sequences, including wheat planted on fallow. The increases were large, with wheat yield 0.571 tonne/ha (8.5 bu/ac) higher for the FW phase and 0.473 tonne/ha (seven bu/ac) for the wheat grown on fallow in the FWW rotation compared to the same rotations without N fertilizer. Mineralization of N under fallow was not adequate to meet crop needs in the second 21-year period.

Continuous wheat most profitable but riskier
Smith also assessed the cropping systems for risk by looking at the average return and the variability of return over the years. He says in the first 21 years, the wheat fallow system without added fertilizer was the most profitable and would have been preferred by farmers because of the low risk and lower cost of production. But in the last 21 years, when the fallow soils had run out of adequate N fertility, the fully fertilized systems were more profitable and less risky.

The most profitable system in the second 21-year period, on average, was fertilized continuous wheat, but Smith says it also had the most risk because of the impact of low yield or prices over the years. Net return can be negative in years with low yield and/or low prices, but it will also be higher in years with high yield and prices.

For wheat farmers willing to tolerate moderate risk, the fertilized FWW rotation was preferable. It gave up some revenue potential because of the year of fallow, but reduced yield variability.

A fertilized FW rotation may be preferred by very risk-adverse producers as yields and net returns are more stable, but of the three fertilized systems, profitability was lower over the longer term.

Where to from here?
Other research has also been conducted on crop rotations in the semi-arid Prairie region. While in the long-term trials at Lethbridge the continuous wheat rotation was the most profitable, agronomically it has some limitations, including the risk of building up disease, weeds with tolerance to herbicides for cereals, and insect pests.

Research at AAFC Swift Current by research scientist Yanti Gan shows how crop rotations have evolved since the Lethbridge long-term plots were established. He looked at including a pulse crop instead of a fallow in a FW rotation. Gan ran a three-year cropping sequence study, repeated for five cycles in Saskatchewan from 2005 to 2011. The cropping sequence included a cereal-pulse-cereal rotation with fertilizer, compared to a FW rotation.

Gan reported that, “in a three year cropping cycle, the pulse system increased total grain production by 35.5 per cent, improved protein yield by 50.9 per cent, and enhanced fertilizer-N use efficiency by 33 per cent over the summerfallow system. Diversifying cropping systems with pulses can serve as an effective alternative to summerfallowing in rain-fed dry areas.”

The cumulative findings of these and other crop rotation studies have helped farmers on the semi-arid Prairies in Saskatchewan include pulses in their rotations for several decades. In Alberta, the current high price for red lentils may convince more southern Alberta farmers to include a pulse in their crop rotation. Indeed lentil acreage has been on a slow rise in Alberta, with 220,000 acres grown in 2015. 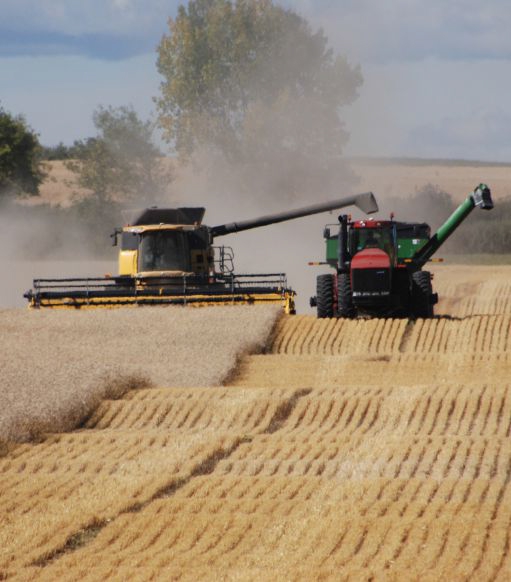 A fertilized fallow-wheat-wheat rotation would be preferred by farmers with moderated risk tolerance.