At the time of the survey, seeding in Western Canada was well under way, aided by dry conditions throughout much of the Prairies. Alberta, Saskatchewan and Manitoba all reported seeding rates well above the five-year average.

In contrast, planting in Eastern Canada has been delayed due to high rainfall and cool temperatures. A recent break in the wet weather in Ontario allowed for seeding progress to resume. Statistics Canada states that the delayed seeding may result in some changes in seeded area estimates later in the reporting cycle, because some estimates provided by farmers in Eastern Canada may have been intentions at the time of the survey.

The largest changes noticed were in the amount of acres seeded for canola, soybean, and barley.

Acres seeded to barley saw one of the largest increases, with a 14.0 per cent in acres seeded nationally. Statistics Canada says that the larger seeded area could be a result of higher barley prices and ongoing trade issues with canola. 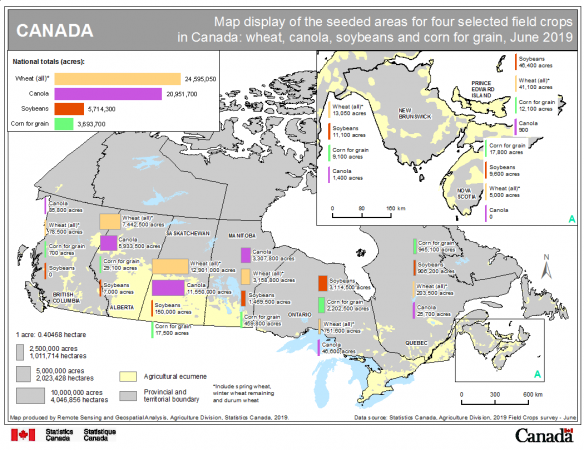 Farmers in Manitoba reported that total wheat planting was up 8.8 per cent to 3.2 million acres.

Nationally, Canadian farmers reported planting 21.0 million acres of canola in 2019, down 8.2 per cent from 2018. While the seeded area in 2019 was the lowest since 2016, it still represented the fourth highest canola area on record. The decrease in canola seeded area was likely influenced by lower prices compared with the previous year. Lower prices may be attributable to limited access to Chinese export markets as well as high global supply of oilseeds.

In Alberta, producers reported that seeded canola area was down 12.9 per cent from 2018 to 5.9 million acres.

Farmers in Manitoba reported that canola area was down 3.2 per cent to 3.3 million acres.

Farmers in Ontario, which generally accounts for the largest area of soybeans, reported planting 3.1 per cent more soybeans to a record high 3.1 million acres of soybeans. Wet, cool conditions have delayed planting throughout the province, and may have prompted some farmers to plant soybeans rather than corn.

Farmers in Manitoba were the main contributor to the national decrease in soybean area, down 22.2 per cent in the province to 1.5 million acres. This was the second consecutive year that farmers in Manitoba reduced planted area of soybeans. Soybean yields in Manitoba have decreased over the past several years due in part to a lack of rain. Lower yields may have prompted some farmers to reduce soybean area.

In Quebec, farmers reported planting 1.0 per cent fewer acres of soybeans to 906,200 acres.

Across Canada, farmers report planting 14.0 per cent more acres of barley to 7.4 million acres. Barley area increased in all three Prairie provinces, which together accounted for 95.2 per cent of barley area in Canada. The larger seeded area may be due to higher prices resulting from low global stocks and the higher anticipated need for livestock feed. Higher barley prices may also have influenced some farmers to plant barley instead of canola, given ongoing trade issues.

Farmers reported planting 3.6 million acres of oats in 2019, up 18.1 per cent from a year earlier. Like barley, low supplies have resulted in higher prices, which may have producers opting to plant a larger area compared with a year earlier. The increase in oat area was concentrated primarily in Saskatchewan (+390,900 acres).

Nationally, farmers reported that corn for grain acreage was up 1.9 per cent from the previous year to 3.7 million acres in 2019. While the March Field Crop Survey indicated that farmers intended to plant more corn than in 2018, poor weather conditions may have impacted actual seeded area.

Ontario producers reported planting 2.2 million acres of corn in 2019, up 2.2 per cent from a year earlier. Corn area was down slightly in Quebec at 945,100 acres.

Farmers in Manitoba also reported higher seeded area for corn than in 2018.

In 2019, Canadian farmers reported planting about the same area of lentils as in 2018, edging up 0.3 per cent to 3.8 million acres, despite ongoing import tariffs imposed by India, which the Indian government has extended until at least 2020.

Nationally, farmers also reported seeding more dry peas, up 19.8 per cent from 2018 to 4.3 million acres. The increase was concentrated primarily in Saskatchewan, which reported planting 399,600 acres more in 2019.


Related
Less canola, soybeans, lentils and more wheat expected for 2019
More wheat, barley and oats in 2019; less canola, grain and soybeans
Projected soybean and canola acres down this year
Barley production on the rise; canola and soybean production down