Bt resistance to corn rootworm in the central U.S. corn belt is a very serious issue. Researchers believe that early identification and elimination of point sources – fields that have resistance occurring – by using crop rotation and other practices will help to slow the development of resistance in the Eastern corn belt, which includes Ontario. 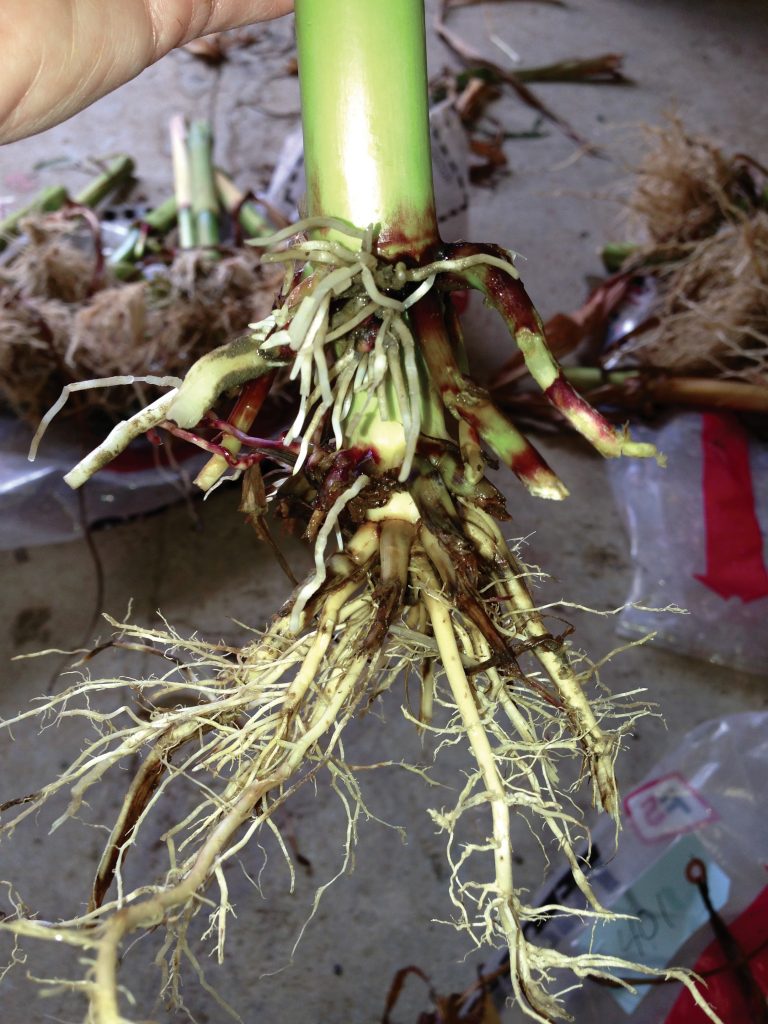 Farms with continuous corn production and fields planted to the same Bt year after year are most at risk for developing resistant rootworm populations Bt resistance to corn rootworm in the central U.S. corn belt is a very serious issue.

The first Bt toxin for corn rootworm control, Cry3Bb1, was incorporated in several products such as Yieldgard Rootworm in 2003, and later in YieldGard Plus, VT Triple and Genuity VT TriplePro. It was also included in Genuity SmartStax and Refuge Advanced products with Cry34/35Ab1, as well as refuge-in-a-bag (RIB) seed mixtures. “Resistance problems with Cry3Bb1 – fields that showed excessive root damage and lodging – were first reported in 2009,” says Dr. Chris DiFonzo, professor in the department of entomology at Michigan State University, who frequently collaborates with her Ontario Ministry of Agriculture and Food (OMAF) and University of Guelph counterparts. “That year in southern Minnesota and eastern Iowa, more than 30,000 acres were affected and that greatly increased in 2011 and 2012. Resistance is now suspected in several other U.S. states as well.”

The development of corn rootworm resistance to Bt corn in Ontario is a potential serious threat that was identified by this group during its annual meeting in February. DiFonzo was invited to join Baute for a presentation on this issue at the Southwest Crop Diagnostic Days in July in Ridgetown, Ont. Corn rootworm resistance to Bt is believed to have developed independently in several fields in the U.S.

Midwest corn belt. “And although the Eastern corn belt differs in important ways from the central U.S. – there is greater crop and landscape diversity, more crop rotation, less irrigated corn and smaller farm sizes – we can assume there is similar potential for rootworms to develop Bt resistance in continuous corn fields here,” DiFonzo notes. “While only a handful of rootworm Bt resistance problems have been reported in Indiana, Michigan, New York, Pennsylvania and Ohio, so far, we must all take our roles in slowing the spread very seriously.”

Schaafsma says that while there have been no confirmed cases of resistance reported in Ontario, the CCPC has come together to support a research project headed by University of Guelph Masters student Andrea Hitchon. It includes grower education and awareness, resistance monitoring, reporting and mitigation, with personnel from within Ontario and the adjacent Great Lakes states working together.
Early identification and elimination of point source fields by crop rotation are the keys to slowing the development and movement of resistance. “Given the speed with which Cry3Bb1 resistance evolved and spread in the west, we must take a strict, proactive approach here, and rotate when a problem is first detected,” Schaafsma explains.

“We need to preserve the usefulness of Cry3Bb1 and other Bt rootworm control products as long as possible.”

Farms with continuous corn production and fields planted to the same Bt year after year are most at risk for developing resistant rootworm populations. “These fields must be targeted for scouting during the field season,” Schaafsma notes. You will likely see a large number of beetles in the field, possibly leaf feeding and damaging silks, resulting in poor pollination.

“Large adult populations alone do not indicate resistance, but problem fields in the Central corn belt do tend to have these,”

DiFonzo explains. “You might also notice unexpected lodging and root damage that cannot be explained by an agronomic or environmental problem, or the presence of another root-feeding pest.”Schaafsma says if you suspect a problem, the next step is to immediately contact OMAF or Ridgetown and the seed provider, so that the location can be examined and sampled.

A key point in determining whether or not a rootworm infestation is likely due to the presence of Bt resistant rootworm populations is to confirm that plants are indeed expressing Bt toxin, DiFonzo
explains. “This is done by grinding and testing leaf tissue, but for final confirmation of resistance, the beetles need to be collected for egg laying.” Eggs are then held under cold conditions for several months before they hatch, and larvae are placed on Bt plants in a greenhouse to determine survival compared to a susceptible lab population.

The Bt toxin might be present in all corn cells or just the green tissue (called Bt expression). If the beetle pressure and damage is high, Bt is present in plants and there is no other explanation for the failure of the hybrid, resistance is likely being demonstrated.

Here are other steps from DiFonzo, Baute, Schaafsma and Smith:

1. Check all nearby at-risk fields this year
If resistance is suspected in one field, it may also be occurring in similarly managed, nearby corn fields. Scout these nearby fields immediately (look for lodging, dig up the roots) and report any suspected problems, as you did for the original field.

2. Rotate next year
All rootworm eggs that hatch the following year will die if corn is not present, so rotation is the single most effective way to reduce the spread of resistance. In fields where resistance is suspected,
rotate in any other crop but corn. If this cannot be accomplishedon-farm, work with a neighbour to trade fields for a season.

The goal is to eliminate point sources. As a precaution, you should also rotate nearby continuous corn fields. If this cannot be done, these fields should be monitored closely the following year, and rotated after.

DiFonzo adds that use of a soil insecticide on top of a Bt hybrid is not recommended by entomologists. “Research trials in several U.S. states show little or no yield benefit from applying soil insecticides to Bt corn,” she says. “Insecticides may also mask a problem with the Bt hybrid.” Smith says soil insecticides on top of Bt traits may also mask indicators of resistance development in the rootworm population.
Smith says other recommendations include avoiding reliance on single trait Bt products for rootworm control and rotating Bt traits and/or using hybrids with pyramided or stacked rootworm traits. “Also ensure that resistance management strategies are followed. Plant a refuge as required, or use refuge-in-the-bag products.”