Mar. 7. 2012, MB – Manitoba wheat growers are playing an important role in preserving the sustainability of midge tolerance technology that is growing in popularity across the province.

“My customers are asking for midge tolerant wheat varieties. There is more interest in them now and I think that will continue to grow,” says Mark Keating, a seed grower and farmer from Russell, Manitoba. “I suspect we are losing at least five percent to wheat midge every year – even under light pressure. I think that the yield difference is too great to ignore.”

Midge tolerant varieties provide built-in protection against midge pests, reducing the need for insecticides as well as fuel use due to fewer insecticide applications. Growers also benefit from a high-quality and high-yielding crop.

While this new technology is very effective, it requires proper stewardship in order to keep it viable for future generations. The midge tolerance originates from a single gene (Sm1) that was moved into spring wheat varieties using traditional plant breeding techniques. To date, there is no other known source of midge tolerance.

“We need to protect Sm1 so that it will be available for future generation of wheat growers,” says Ian Wise, a biologist at Agriculture and Agri-Food Canada’s Central Research Station.

Interspersed refuge
Special measures have been introduced to preserve this technology in the form of an interspersed refuge. In this system, varieties containing the Sm1 gene are blended with 10 percent midge susceptible varieties to form a varietal blend (VB) prior to seed sale. This creates a refuge to ensure that some non-virulent midge (i.e. those not resistant to the Sm1 gene) survive, preventing a build-up of the resistant midge population.

“We are confident that by using the refuge, we can prolong the lifespan of this particular resistant gene to the point where it would provide effective efficacy against the wheat midge for many decades,” says Wise.

Outstanding agronomics
According to Wise, Manitoba is usually on the “fringe” in terms of heavy midge pressure, but the devastating insect pest can increase in numbers fairly quickly under the right conditions.

“Right now there is a lot of interest on the part of growers because of the superior agronomics of the varietal blends,” he says. “The most recent information from the grain industry shows that four out of the five top-yielding cultivars are wheat midge resistant. From that standpoint, growers are in a good predicament because it doesn’t matter which one they select, they know it will have superior agronomics. It is just a matter of picking the one that has the best agronomics for their area.”

Eric Pateman, based out of McAuley, Manitoba experienced agronomic benefits in his first midge tolerant wheat crop in 2011. “I was really happy with AC Goodeve VB. It matured three or four days earlier in our side-by-side comparison with AC Kane. Yields were very similar, but it was easier to thrash. Yield-wise, harvestability and height – it was perfect.”

Environmental benefits
Keating also points to environmental benefits of using the technology. “There is certainly less damage to non-target pests with the midge tolerance gene when you compare it to the insecticides that are traditionally used to control midge,” he says. “Thirty percent of my wheat crop in 2011 was midge tolerant. In 2012, I plan to increase it to 70 percent.”

This article has been brought to you by the Midge Tolerant Wheat Stewardship Team, a broad industry coalition representing plant breeders, government, seed growers, seed distributors and producer groups. 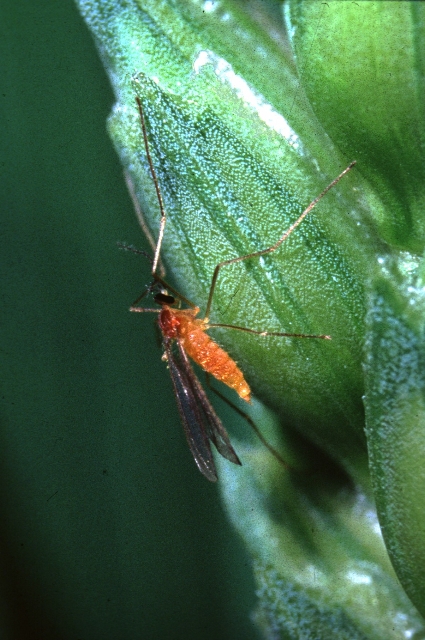 Growers have benefited from midge-resistant wheat. Manitoba wheat growers are playing an important role in preserving the sustainability of midge tolerance technology that is growing in popularity across the province.