Proactive research is underway to counteract the threat from further spread of this canola pest. 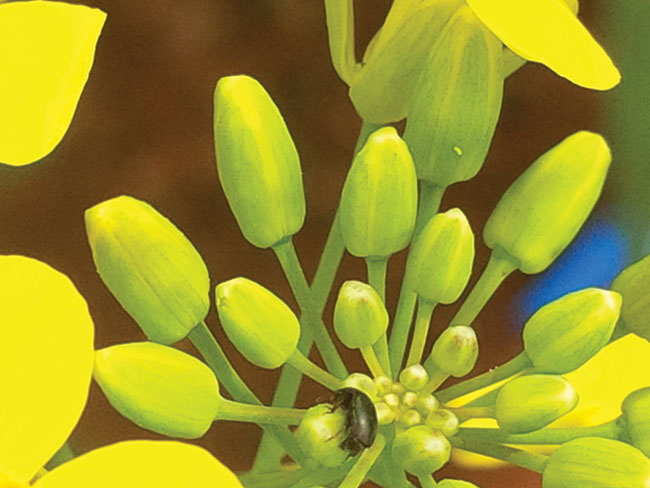 An adult pollen beetle prepares to lay her eggs inside a canola bud. Photos courtesy of christine noronha.

Entomologist Christine Noronha first happened upon a pollen beetle infestation in P.E.I. canola fields in 2012. “At that time, the growers here didn’t know the pest was in their crops. I was working on some other insects in canola and I found the beetles. So I went to other canola growers and visited their fields. The fields were just teeming with these beetles, but they are so small that nobody noticed them.”

Noronha, a research scientist with Agriculture and Agri-Food Canada (AAFC) in Charlottetown, is leading a project to help ensure that other Canadian canola growers will be ready for this pest’s invasion.

The pollen beetle (Brassicogethes viridescens) is an introduced species from Europe, where it can cause serious yield losses. In Canada, the pest has become established in the Maritimes and Quebec. However, climate models show it could survive and even thrive in other canola-growing regions across the country.

A tiny but menacing pest
The adult pollen beetle is about two- to 2.5-millimetres long and black with a metallic green tint. The adults emerge in early spring and feed on the pollen of many different plant species.

“Then as soon as canola gets to the stage where the buds are starting to form, the adult beetles move in to lay their eggs,” Noronha notes. The larvae can only survive on Brassicas, which include crops like canola, mustard and broccoli and weeds like stinkweed and shepherd’s purse.

“The adult beetles chew a hole in the newly-forming buds and lay their eggs inside the buds. The larvae have two instars, or growth stages. When the larvae first hatch, they feed on the pollen inside the bud. By the time the bud opens, the larvae are in their second instar. The second instars are a little more mobile and they move around to feed on the pollen in other flowers. The mature larvae fall to the ground and then pupate in the soil.” The adults emerge from the pupae a few weeks later. They feed on the pollen of various plant species and then overwinter in the soil.

Heavy infestations have the potential to severely impact canola yields. “The plant aborts the buds and flowers that have been damaged by the larvae. As a result, the crop has fewer flowers, fewer pods and fewer seeds, so the yield declines,” she explains.

“In the Maritimes, we have quite a few pollen beetles, but not a lot of canola is grown here, so the pest is not a huge issue,” she notes. “Although mustard is grown here, it is mainly a plough-down crop to control wireworms, and for plough-downs, seed yield is not important. Also, when you work the crop under, you’re probably killing the pollen beetle larvae, so you’re not really contributing to the build-up of the beetle’s population either.”

Other regions in Canada grow much more canola than the Maritimes. Based on Statistics Canada data over the past five years, the average area seeded to canola in Quebec is about 33,000 acres, and in Ontario it is about 45,000 acres. In the Prairie provinces, around 21 million acres are seeded to canola annually.

A cross-Canada project
“The whole premise of our pollen beetle project is to be proactive,” Noronha explains. “We want to create a bank of knowledge that we could use so we can hit the ground running when the beetles get to Western Canada, instead of trying to figure out what to do when they are already there and causing problems.”

This project, which is funded by the Canola Council of Canada, runs from 2018 to 2022. Most of the research is taking place in the Maritimes because the pollen beetles are there.

Evaluating insecticides and thresholds
One of the project’s studies is evaluating the efficacy of various insecticides. “No insecticides are registered in Canada for controlling the pollen beetle, so at the moment growers don’t have a control option if the beetle becomes a serious problem,” Noronha says.

For this initial work, Noronha and her research group are conducting the evaluations in the lab. “Once we get a good idea of how all the different insecticides work in the lab, then we’ll try them in the field to see if they give the same kind of efficacy.”

Noronha’s group had to pause the lab trials in 2020 due to COVID restrictions, but they plan to test additional insecticides in 2021-22.

“We have already tested a few products. Most of them are giving good control in the lab,” she says. “I’ve got a number of other products in mind for testing, such as insecticides with a shorter half-life that would be less of a problem for bees. We also want to look at factors like application timing; we would like to apply the insecticide before the flowers open to minimize bee exposure.”

The project also includes a field study to determine economic thresholds for controlling the pollen beetle in canola. The study’s preliminary results suggest that a density of nine beetles per plant results in significant decreases in seed weight and the number of pods.

Noronha and her research group are continuing this threshold study in 2021-22. “Once we know what the threshold is above which you are going to have a reduction in your yield, canola growers can use this as a decision-making tool.”

Developing a lab colony
Another component of the project involves developing a pollen beetle lab colony that Noronha can use for things like testing control measures. Since the eggs, larvae and beetles are all quite small, they are somewhat difficult to work with, but the main challenge is to stop the adults from remaining in a dormant, overwintering phase for many months.

To start the colony, Noronha and her group have brought the beetles into the lab and put them in cages with canola plants from the greenhouse. The researchers have had no trouble getting the beetle’s life cycle to go from egg-laying adults, to eggs, larvae, pupae and new adults. But they have determined that the new adults have an obligatory diapause – they must go into an overwintering phase from the fall until the spring.

“A lab colony is more useful if the insects just keep going from generation to generation. That way you constantly have a supply of insects for your trials. But in this case, we only have the insects in the growing season because after the summer they go into diapause.” She is hoping to find a way to break the beetle’s diapause cycle in the lab. 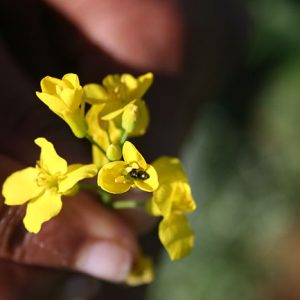 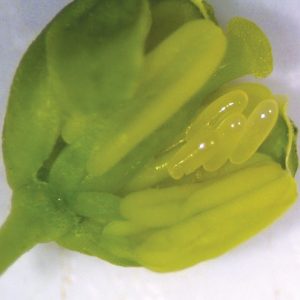 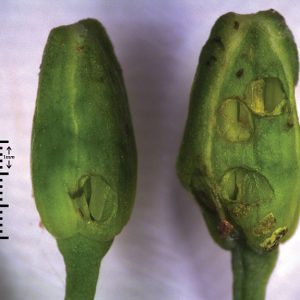 Feeding by the larvae damages canola buds and flowers.

Looking for natural enemies
The project also includes a search for parasitic wasps native to the Maritimes that have adapted to attack pollen beetles. These tiny wasps lay their eggs inside the eggs or larvae of other insects. As the wasp larva grows, it feeds on the host insect’s larva, gradually killing it.

“These parasitoids are really neat because they can find their host’s eggs or larvae even when hidden inside a plant,” Noronha notes. These natural enemies could be very useful for attacking pollen beetle eggs or larvae inside the canola buds.

Looking for such parasitoids is fairly straightforward. “We take the pollen beetle larvae in from the field and keep them in the lab. When the larva becomes a pupa we look to see if a parasitoid emerges,” she explains.

Noronha and her group haven’t found any parasitoids in pollen beetle larvae so far. If they do find such a species, they can then look for a way to boost the parasitoid’s population so it could provide greater control of the pest.

Tracking the beetle’s spread
A key component of the project is to monitor for the spread of the pollen beetle. “Detecting the pest early will allow us to take action faster to control it,” Noronha explains.

Her colleagues in Western Canada are conducting annual surveys for the pest in Prairie canola fields. John Gavloski, who is with Manitoba Agriculture and Resource Development, is leading the Manitoba surveys. Tyler Wist at AAFC-Saskatoon leads the Saskatchewan surveys. And AAFC-Lethbridge’s Héctor Cárcamo leads the Alberta surveys.

Noronha says, “So far, we have not found pollen beetles in Western Canada, which is very good news.”

Although entomologists have looked for the pollen beetle in Ontario in recent years, the insect has not yet been reported in the province. “Last year, my plan was to go to Ontario to survey for the beetle, but then COVID came along and stopped my plans,” Noronha notes. “I am still hoping to do that sometime in the future. This summer, I hope to be able to collaborate with some people in Ontario who could conduct sweeps in different Brassica crops to see if the pest is there.”

Next steps
If funding is available for pollen beetle research after 2022, Noronha has several ideas for further studies. For example, she would like to conduct field trials with the more promising insecticides identified through her lab trials.

And perhaps the trial data might spark the interest of some insecticide companies in pursuing registration of their products for pollen beetle control in Canada.

Noronha would also like to experiment with some integrated pest management options. For instance, she would like to try using an early-planted trap strip of a Brassica crop to attract the beetles to that strip first. That strip could be sprayed to control the pest, rather than spraying the entire field.

She also would like to continue surveying for the beetle in Ontario and Western Canada to provide an early warning system for growers. And she would like to continue watching for pollen beetle parasitoids in the Maritimes and also in Quebec. A study conducted several years ago didn’t find any parasitoids in Quebec, but she thinks it’s time for another look. “I am sure that some insect species will adapt to become a natural enemy of the pollen beetle at some point.”

To improve her pollen beetle colony, Noronha wants to figure out a way to trick the beetle into coming out of diapause early or perhaps avoiding it completely. “For some insect species, you can break the diapause by exposing the insect to different temperature regimes or light cycles. But other species must overwinter for a set period of time. We want to play around a little more with trying to break the pollen beetle’s diapause; we’d be able to do many more trials if we could rear the colony year-round.”

Noronha concludes, “This beetle is a fairly new pest for Canada and we’re really just starting the research, but I think we’re on the right track to developing results that will benefit the growers.”