So far, Alberta remains free of invasive mussels. Originally from Europe, zebra mussels and quagga mussels arrived in the Great Lakes in the 1980s. Since then, these two species have been spreading through North America’s waterways, clogging water-related infrastructure, damaging aquatic ecosystems and degrading recreational areas. In 2013, the mussels were found in Lake Winnipeg. In November 2016, they were discovered in a Montana reservoir. 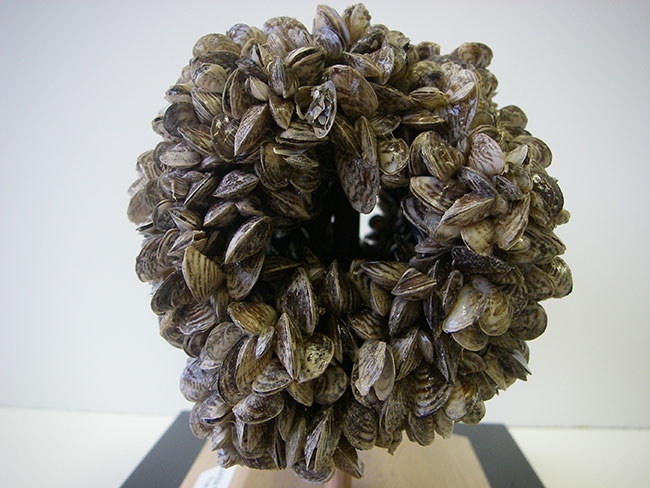 As the threat draws nearer, stakeholders in Alberta’s irrigated areas are working on prevention, monitoring and research to fight these devastating pests.

“Alberta does have native mussel species, but the invasive mussels are able to attach onto things like the inside of irrigation pipelines and canals, water measuring devices and control structures,” explains Ron McMullin, executive director of the Alberta Irrigation Projects Association (AIPA). “An individual mussel is no problem, but these mussels can form layers upon layers, so they can reduce water flows in pipes and even plug pipes. They can foul structures used to control water flows manually or remotely. The mussels could reduce flow in pipes used on the farm and in the pivots.”

Alberta Agriculture and Forestry (AAF) research scientist Barry Olson says, “Southern Alberta has an extensive irrigation system with over 50 reservoirs and about 8,000 kilometres of conveyance, canals and pipelines within the 13 irrigation districts, so it’s a very important feature in agriculture in southern Alberta. Those 8,000 kilometres are being converted from open canals to pipelines and about half have already been converted. We are particularly concerned about the pipelines because the mussels could settle and proliferate in them and clog them. Also, shell debris could move through the system and plug things like nozzles, [pumps and screens].” Mussel infestations could potentially mean replacing pipelines and other components of irrigation infrastructure.

Olson also notes, “Alberta’s irrigation infrastructure is also used to provide water to a variety of communities, and the reservoirs are used for recreational activities, so those could also be affected.”

The most likely way for the mussels to come into Alberta is on watercraft. The mussels are only about one to three centimetres long and the juvenile stages are even smaller. They can attach to boats and other equipment used in the water and can survive out of water for extended periods. The microscopic, free-swimming larvae, called veligers, can survive in standing water in boats and other equipment.

Olson points to a further risk factor: “Montana and Alberta are also hydrologically connected; we have river systems that come up from Montana into Alberta.”

In addition, Alberta’s bodies of water tend to have conditions that are very suitable for these mussels; if the mussels do arrive, they’ll likely thrive. The mussels are very difficult to eradicate, and given that an adult female quagga or zebra mussel can produce up to about a million eggs per year, an infestation could create serious problems very quickly.

Prevention efforts
Alberta Environment and Parks (AEP) is the lead provincial agency on invasive mussels. AEP estimates a mussel infestation would cost Alberta over $75 million annually for damage to irrigation infrastructure and other impacts. AAF, the AIPA and the irrigation districts are collaborating with AEP and others to help prevent the spread of the mussels.

“Prevention is much cheaper than dealing with the mussels, so as long as we can keep them out, we will save a lot of time, effort and money,” McMullin says.

The AIPA and the irrigation districts have invested over $200,000 into mussel prevention. Some of these funds have helped pay to have sniffer dogs and their handlers trained to check for mussels at AEP’s watercraft inspection stations. McMullin says, “These dogs can smell the mussels, not just see them. For instance, it is difficult for a person to do an inspection on a boat when it’s getting dark, whereas the dogs have an easier time. The larvae are microscopic so we can’t see them with our eyes, but the dogs can smell them.”

The funds have also been used to purchase promotional items for people who are having their boats inspected, including things like chamois cloths and floating keychains that display the “Clean, Drain, Dry” slogan or the mussel hotline number [1-855-336-BOAT (2628)] you can call if you have questions or suspect an infestation.

“And, with a small group of organizations, we have helped pay for signs to go up at most boat launches throughout the province,” McMullin says. “The signs talk about ‘Clean, Drain, Dry’ for boats and give some information about the mussels. Some of those boat launches are official ones, and some are just a slope down into a lake. The signs help educate everybody with a boat who goes past.”

Some funds have also helped pay for permanent signs along highways to inform the public of mandatory boat inspections and for educational advertisements in magazines and the Alberta Guide to Sportfishing Regulations.

Mussel monitoring
AAF and the irrigation districts are also helping AEP and its partners monitor water bodies for the mussels.

“We have identified 21 of the irrigation reservoirs as being at high risk of mussel infestations because of boating activity,” Olson says. “AEP and its partners have a lake and reservoir monitoring program, but they are only able to monitor a few of those 21 reservoirs in any given year, because their monitoring program is on a rotational basis. We and the irrigation districts felt it was important to monitor all those high-risk reservoirs on an annual basis, so we have filled that gap.” Twice a year for the past four years, AAF staff have gone to each of the high-risk reservoirs that are not monitored by AEP – usually about 15 to 18 reservoirs per year – to do veliger monitoring.

As well, irrigation district staff are doing monthly substrate monitoring in the high-risk reservoirs. “Substrates are small pieces of PVC pipe weighted down with cement inside them. They are placed in the reservoirs and then inspected to see whether or not mussels have settled onto the substrates,” Olson says. In addition, irrigation district staff are encouraged to inspect infrastructure for the presence of attached mussels, particularly in the fall after water drawdown.

If the mussels do invade
In case the mussels do arrive in Alberta, AAF is investigating the use of potash to prevent them from building up in irrigation equipment. “Right now, there is no registered product that can be used to control mussels in Canada, but we know the potassium in potash is lethal to mussels if the concentration is high enough; that has been demonstrated in other jurisdictions in the United States and in Lake Winnipeg,” Olson says.

“Our research is trying to develop a method to treat the irrigation infrastructure, particularly pipelines, with potash. It is more of an engineering type of research about how can we prepare potash, inject it into an irrigation pipeline and manage the treatment, which has never really been done before.” The project has received some funding assistance from Alberta Innovates and Growing Forward 2.

As part of the project, AAF is working with the Eastern Irrigation District on a two-year pipeline trial. In 2016, the trial’s first year, the project team successfully tested a possible treatment protocol in a small pipeline in the district. The protocol involves injecting potash into a pipeline at a concentration of 100 parts per million of potassium, holding the potash-fortified water in the pipeline for 48 hours, and then releasing the fortified water onto a field. In 2017, they plan to test the protocol in some larger and more complicated pipelines.

Down the road, the project team may need to fine-tune the protocol to ensure a good balance between what is effective for controlling the mussels and what is practical for farmers’ needs. Also, the team is just starting to explore what might be done in situations where the mussels have already built up in a pipeline by the time the problem is detected.

Another part of the project is a two-year, small-plot study at the Alberta Irrigation Technology Centre in Lethbridge. This study, which started in 2016, is evaluating the effects of the potash-fortified water on soil quality and crop quality. Potash is used as a fertilizer in Alberta and a single application of the fortified water is not expected to have a negative effect on soils and crops. However, since the mussels probably would not be eradicated, the potash treatments would probably need to be done repeatedly as part of a long-term maintenance program. The project team wants to assess the effects of multiple potash applications.

The project will also include an assessment of the potential economic costs, logistics and other factors that must be considered if this method is implemented.

This is part of a larger project with AEP to register potash as a mussel control agent with the federal government, which could also be a benefit to other jurisdictions in North America.

With action on mussel prevention, monitoring and research underway in Alberta, is there something that irrigation farmers can do to help? Since Alberta is still mussel-free, Olson says the most important thing that farmers – and everyone else – can do is to follow the “Clean, Drain, Dry” steps when using watercraft and other equipment. And McMullin suggests people keep an eye out for the mussels: “If we do get these mussels, we will need to know where they are as soon as possible.”

Always clean, drain, dry
Zebra and quagga mussels can be spread by boats and other equipment used in water (hip waders, life jackets, kayaks, construction equipment and so on). Between uses, be sure to:


Related
Opportunities to update irrigation for Alberta producers
Preparing for potential resurgence of stripe rust
Weeds to watch: Preparing for the arrival of Palmer amaranth
Preparing for action