Bean leaf beetle has emerged as an important concern in Ontario soybean fields. To help in the battle against this beetle, University of Guelph researchers are investigating some key factors affecting the beetle’s development and impacts on seed yield and quality. Using that information, they are creating improved thresholds for pesticide application and
assessing future risks from the beetle. 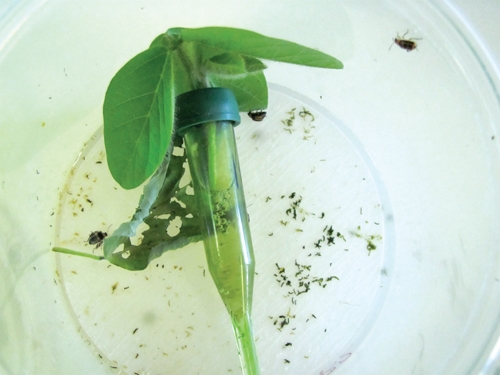 In a growth chamber study Bean leaf beetle has emerged as an important concern in Ontario soybean fields. To help in the battle against this beetle

Bean leaf beetle has been a significant soybean pest in parts of the United States for many years, but it’s fairly new to
Ontario. It was first discovered to be overwintering in southern Ontario in the early 2000s. Surveys in 2009 and 2010 found the beetle’s range in the province extended north to southern Bruce County and east to York County.

The adult is the most damaging stage of this pest. It chews round holes in soybean leaves, it may cut off cotyledons and seedlings, and it feeds on flowers and pods, sometimes clipping off the pods. Damage from pod feeding increases the risk of various pod diseases. In particular, the beetle is a vector of bean pod mottle virus, which causes the seed to become mottled and wrinkled, affecting quality and yield. The beetle prefers soybeans, but it may also damage dry edible beans.
The adult is about one-fifth of an inch long. It is usually tan, yellow-green or red, and may have up to four black spots. If the adult has spots, it might be mistaken for an insect such as a lady beetle or spotted cucumber beetle, but it has a distinctive black triangle behind its head.

Dr. Rebecca Hallett, an entomologist in the School of Environmental Sciences at the University of Guelph, is leading this research project, which started in 2010. Her main collaborators are Dr. Art Schaafsma, University of Guelph, Ridgetown Campus, and Dr. Jonathan Newman, director of the School of Environmental Sciences. Two graduate students are working on the project: Cara McCreary and Emily Berzitis. The researchers have also been working with Tracey Baute, field crops entomologist with the Ontario Ministry of Agriculture, Food and Rural Affairs (OMAFRA).

“Our first objective was to determine the life cycle of bean leaf beetle in Ontario because it has different numbers of generations across its range,” says Hallett. “The number of generations is important because it affects the type of soybean damage experienced and therefore whether or not we need to be concerned about feeding on vegetative stages of plants versus only the pod-feeding stages, and whether disease incidence in pods is an issue or not.”
For this objective, the researchers used field experiments with soybean plants caged with beetles, growth chamber
experiments and field sampling of natural beetle populations to examine how quickly the beetles go through the different stages in their life cycle at different temperatures.

The second objective is to assess the impact of environmental factors on the beetle’s development and success. “We’re looking at factors like the effect of temperature on overwintering survival and the effect of carbon dioxide level on development and fecundity [number of offspring], and then predicting the impact of climate change on the future distribution and abundance of the beetle,” explains Hallett.

She adds, “Bean leaf beetle has been steadily expanding its range through North America, coming north and eastward over the last 150 years. From accounts of bean leaf beetle in the 1970s, it probably didn’t overwinter in Ontario at that time. Then in the ’90s or possibly early ’00s, there was evidence that it was beginning to overwinter in Ontario. So we think some climate change effects may already be occurring that have helped it to establish in Ontario.”

The overwintering survival study included various experiments in which bean leaf beetles were placed into pots of soil and
buried in the field, similar to their natural overwintering conditions. Some pots were allowed to experience the natural conditions at the three field sites, and some were subjected to snow removal and/or warming to simulate winters under warmer conditions.

The carbon dioxide work is conducted in specially constructed chambers in a greenhouse. Carbon dioxide levels could be important because they affect plant growth, insect development, and insect feeding on plants. Hallett notes, “We already have much higher levels of carbon dioxide in the air than we did 20 or 50 years ago, and those levels are projected to continue increasing.”

The project’s third objective is to examine the impact of pod feeding by bean leaf beetle on seed quality and yield, and then to establish a late-season action threshold.

For this objective, the researchers conducted field trials in which the soybean plants were caged at different reproductive stages with different numbers of beetles to determine when the most damage occurs to seed quality and yield.
Some of the project’s experiments are still in progress, but the researchers have already achieved valuable results.
“We have determined there is one generation of the beetle in Ontario,” says Hallett. The adult beetles overwinter in the soil, emerge in the spring, feed, mate and beginning in June lay their eggs in the soil near the base of soybean stems. After hatching, the larvae feed on soybean roots and then pupate in the soil. The new adults emerge from the pupae in late August and September.

The results so far also indicate that the beetle is poised to take advantage of warmer conditions. “We have found that
under warmer winter temperatures, the bean leaf beetles emerge several weeks earlier in the springtime. However there don’t seem to be any differences in survival in the different winter conditions that we have looked at,” she notes. “We’re
repeating this experiment, so the results are still preliminary, but if the bean leaf beetles are emerging earlier when temperatures are warmer, then possibly they could have two generations in Ontario in the future.”

Another interesting finding is that some egg laying is occurring quite late. Hallett explains, “They seem to be laying eggs that have no chance of developing before the winter hits. But with a shift in climate and earlier emergence, there could
possibly be enough time for two generations to develop. And that would mean stronger impacts on the vegetative stages of soybeans, as well as the impacts of later pod-stage feeding.”

The researchers have also created a predictive tool. “We have developed a degree day model that can be used in the field to predict when bean leaf beetles will be emerging. That tool could be used by growers or crop scouts to give them a heads-up as to when bean leaf beetle adults are going to be around,” says Hallett. The researchers are exploring options for making the tool available to growers and scouts.

Not surprisingly, the pod-feeding studies have found increasing pod damage and yield impacts with higher numbers of beetles. Currently, the researchers are conducting a detailed analysis of the data to develop a threshold recommendation for controlling late-season impacts.

Hallett says, “The recommendation could be based simply on the number of beetles per plant. But we also would like to base it on the reproductive stage when the beetle causes the most damage.
For instance, it may be that it’s most damaging at an earlier reproductive stage, and so it might not be worth spraying if the damage occurs at a late stage, even if there are a lot of beetles.” She hopes to have the threshold recommendation analysis completed in the spring of 2013.

The project is funded by the University of Guelph-OMAFRA Partnership Program and Grain Farmers of Ontario.