Weed scientist Hugh Beckie with Agriculture and Agri-Food Canada (AAFC) at Saskatoon, Sask., shouldn’t take it personally, but Prairie farmers are hoping he will be wrong. Wrong in his prediction of which weeds may develop glyphosate resistance on the Prairies. He was correct in his prediction that kochia would develop glyphosate resistance, and his modelling lays out which weeds might be next.

“At the Saskatchewan Soil Conservation Association conference held in Saskatoon in February 2007, I stated that ‘when glyphosate resistance occurs, it will likely be first reported in Ontario.’ Indeed, a case of glyphosate resistance was confirmed in 2010 in Ontario – giant ragweed (Ambrosia trifida L.) infesting a monoculture glyphosate-resistant soybean field. Emboldened by my success, I again venture where others have wisely dared not to go.”

Beckie explains that the main risk factors for evolution of herbicide-resistant weeds are recurrent application of efficacious herbicides with the same site of action, and annual weed species that occur at high population densities, are widely distributed, prolific seed producers and have efficient gene (seed or pollen) dissemination. Additionally, some weed genera, such as Lolium (i.e. Persian darnel), Avena (.i.e wild oat), Amaranthus, (i.e., Palmer amaranth) and Ambrosia (i.e., ragweeds), are prone to developing resistance to different modes of action.

Other factors controlling the evolution of resistance, says Beckie, include initial frequency of resistance biotypes prior to herbicide use, fitness of resistant versus susceptible biotypes, and seedbank longevity (buffering capacity).

Of these factors, Beckie explains that herbicide selection pressure has the greatest impact on the development of resistance. This includes the level of weed control a herbicide delivers, its persistence in the soil and the frequency of application. In the case of glyphosate, it scores high on level of control and frequency of application. Used in pre-seed, in-crop, pre-harvest and post-seed, often without tank-mix partners and often multiple times in the same year, this type of herbicide selection pressure is intense. And with the move to a canola/wheat rotation as the most common rotation on the Prairies in the last few years, the selection pressure may have gone up even further given that glyphosate is used in Roundup Ready canola.

And the predictions are…
Beckie applied a herbicide resistance model developed by Gressel and Segel (1982) and adapted it to glyphosate on the Prairies. He estimated the glyphosate selection pressure on the top 10 weed species in terms of relative abundance (not including Canada thistle), plus wild mustard in the Grassland and Parkland areas of the Prairies, the proportional weed emergence at various application timing and the efficacy of glyphosate on those weeds. (See Table 1, above.)

Kochia was the only weed in which the glyphosate selection pressure was predicted to be greater before seeding than in-crop. This prediction was validated when the glyphosate-resistant kochia populations that were confirmed on the Prairies were found to have developed on chemfallow fields that had multiple glyphosate applications throughout the growing season, and year after year.

“It wasn’t a surprise that confirmed cases of glyphosate resistant kochia were found on the southern Prairies. Similar cases were found on the northern Great Plains in the last few years as well,” says Beckie.

The riskiest practices in western Canadian cropping systems are lack of crop-rotation diversity (growing mainly oilseeds) and a high frequency of glyphosate-resistant crops in the rotation. Beckie says the weed tool provides an overall risk rating for farmers, and recommends three best-management practices to reduce the risk of glyphosate resistance in weeds.

If growers suspect they have glyphosate-resistant weed populations on their farm, Beckie recommends they submit a weed seed sample to him for herbicide resistance testing. 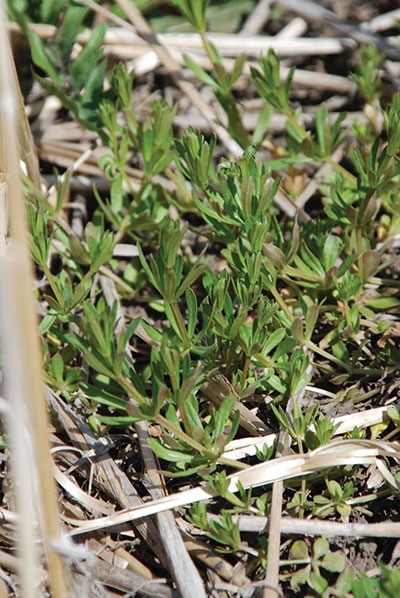 Cleavers is rapidly spreading across the Prairies. Kochia was the first glyphosate-resistant weed on the Prairies. What weed will be next?