Corn planting technology has come a long way in addressing such issues as depth, spacing and seedbed environment – three corn planting factors that Greg Stewart, corn specialist at the Ontario Ministry of Agriculture and Food (OMAF), says are crucial in order to provide crops with the best environment for optimal growth and development. But major improvements are still being made, with new products being launched in early 2014.

Corn 101
Stewart demonstrated the importance of achieving adequate depth, sufficient spacing and creating a favourable seedbed environment at last summer’s Farm Smart Expo at the Elora Research Station in Ontario. While showing producers what can happen when things go wrong, he reviewed how to calculate plant depth, why it is important to understand plant uniformity, and how to improve spacing and performance in the physical environment around the root zone.

For optimal nodal root development, corn plants should be planted to a depth of 1.5 to two inches. Corn should never be planted shallower than 1.5 inches, as shallow-planted corn will have difficulties taking up water and nutrients. Also, plants with underdeveloped root systems are prone to falling over as they further develop. Symptoms of irregular planting depth include varying plant height and uneven emergence.

To identify the planting depth of an individual corn plant, Stewart advises looking at the plant’s root mesocotyl.

“It’s usually right in the centre of the root system,” he says. “It’s whiter than all of the other roots on the plant and quite often has no other branches or roots coming from it.” To find your planting depth, simply add three-quarters of an inch to the mesocotyl.”

When looking over the stand, says Stewart, check for things like uniformity and spacing. “It’s generally more important for us to have uniform staging,” he says. “That is, every plant beside its neighbour at the same stage, the same height, and about the same size.

Picket fence spacing and perfect depth aren’t the only important factors, though. Growers should strive to create a seedbed that gives the greatest chance for uniform emergence and uniform root growth. “What we really care about is that cobs are uniform and a good weight all of the way down the row,” says Stewart.

Stewart says it’s tough to mess up in Elora, but he did find instances of hatchet root – roots that were growing down into the trench.

“We planted this field with very high down pressure on the row unit and tried to do as poor a job as we could in closing the trench,” says Stewart. “If you’d gone into a soil with a little more clay and you’d done what we did, you could create a slot that the roots would hardly push their way out of.”

There are two key things producers need to watch for to improve early growth of the root system. The first is how much down pressure is applied to the row unit itself. The second is to make sure that the trench is closed properly. This means not leaving a seed trench open and susceptible to drying out, but also not smearing it shut in such a way that early root and shoot growth are restricted.

“With higher residue or no-till situations, we are looking at different options to crumble that trench closed,” Stewart says.

“In good conditions, I’m not overly convinced that my down pressure and my closing wheels are really changing the game much for us,” he continues. “I like to have the options of adjusting down pressure and crumbling the seed trench closed, particularly if I’m on a no-till piece of ground. But they’re not game changers if everything else seedbed-wise is in good shape.”

Precision Planting
A new seed delivery system is now in development at Precision Planting. Sean Arians, product marketing manager, says the SpeedTube will allow growers to plant corn and soybeans much faster than is possible with seed tubes.

Because high speeds lead to poor spacing, planting speed is limited by the constraints of the seed tube. By controlling the seed all the way from the meter to the furrow, this problem is addressed. Look for more details after the spring planting season.

“This new bulk fill system provides seed delivery from the tank to the mini hopper, no matter the seed population or seed coating,” Hoeg says.

John Deere
This year, John Deere is releasing the ExactEmerge planter. For traditional planting they will also offer a new MaxEmerge five-row unit.

The ExactEmerge row unit incorporates new technology that gives corn and soybean producers the ability to plant at speeds of up to 16 kilometres per hour while maintaining superior seed placement, according to Barry Nelson, a John Deere spokesperson. The ExactEmerge row units are meant to help producers plant more efficiently, adds Kelby Krueger, product specialist with John Deere Seeding Group. 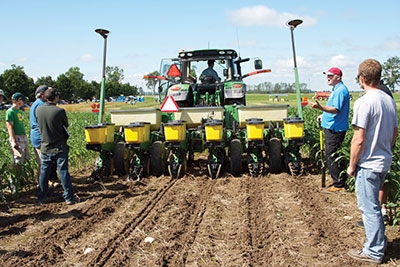 OMAF’s Greg Stewart says a good seedbed environment is necessary to provide plants with the best chance for optimal performance. Corn planting technology has come a long way in addressing such issues as depth