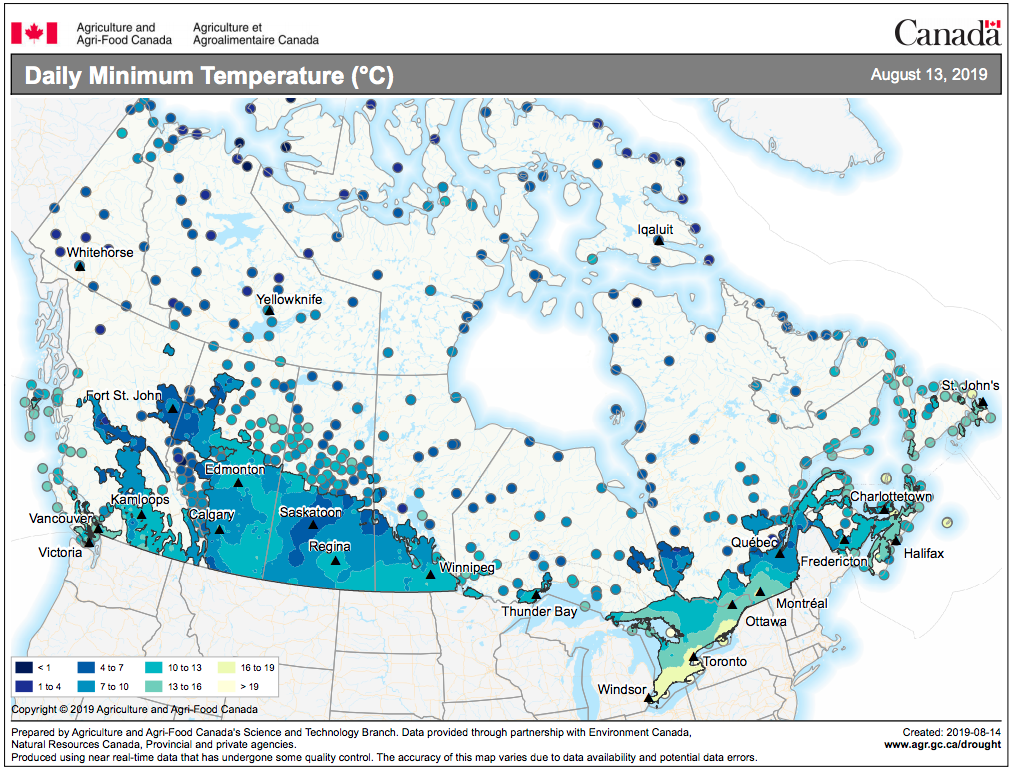 Daily minimum temperatures have not reached below freezing, but the weather forecast suggests this might change over the weekend for parts of the Prairies. Map courtesy of Agriculture and Agri-Food Canada.

Parts of the Prairies are at risk for thunderstorms this week, with threats of snow this weekend as temperatures drop below freezing, according to The Weather Network.

The cold weather will be concentrated in the areas of northern British Columbia and northern Alberta, reducing any chances of late summer heat to finish the rest of August.

This is unwelcome news for field crop producers who already have faced their fair share of bad weather this growing season. Last weekend, growers in Peace Country, Alta. shared reports of frost on their crops, and prairie growers in various regions have consistently faced thunderstorms and strong winds throughout the summer.

Widespread heavy rains are also expected across northern Alberta and Saskatchewan through the weekend, according to The Weather Network. Thunderstorms currently pouring down in middle of the Prairies will continue to move east, increasing the risk of thunderstorms for eastern Saskatchewan and southern Manitoba. The full forecast for the upcoming weekend is available online.

Last year, it was the second week of September when frost with minimum temperatures of up to -6 C was reported in northwest Alberta and most of the central Prairies. This year, the colder weather is predicted to swoop in sooner. However, early frosts are not immediately causes for concern. CanolaWatch, a resource produced by the Canola Council of Canada, shared what to do after an early fall frost. A light frost is considered anything above -2 C, and a heavy frost is anything below -2 C. In both cases, producers are encouraged to assess the damage in the early afternoon when frost damage can be properly assessed.

For soybean producers, the impact of frost is influenced by the level of soybean maturity. Longer duration of freezing temperatures, dry soil, wide rows, less nighttime cloud cover are all factors that can increase frost severity, according to an older resource on frost impact from the Manitoba Pulse and Soybean Growers.

Crop progress is currently varied across the Prairies with some areas seeing storms and others facing dry conditions. The weather forecast, with its early predictions of frost, will hit some producers more than most, especially those who are still reeling from the cool wet harvest of 2018.