Features Bioenergy Other renewables
Plant mutations may be better for biofuels

Aug. 14, 2012, Ames, Iowa - Genetic mutations to cellulose in plants could improve the conversion of cellulosic biomass into biofuels, according to a research team that included two Iowa State University chemists.

The team has published its findings in the online early edition of the Proceedings of the National Academy of Sciences. Mei Hong, an Iowa State professor of chemistry and an associate of the U.S. Department of Energy's Ames Laboratory, and Tuo Wang, an Iowa State graduate student in chemistry, contributed their expertise in solid-state nuclear magnetic resonance spectroscopy to the study.

The study was led by Seth DeBolt, an associate professor of horticulture at the University of Kentucky in Lexington. Chris Somerville, the Philomathia Professor of Alternative Energy and director of the Energy Biosciences Institute at the University of California, Berkeley, is also a contributing author. The research project was supported by grants from the National Science Foundation and the U.S. Department of Energy.

Researchers studied Arabidopsis thaliana, a common model plant in research studies, and its cellulose synthase membrane complex that produces the microfibrils of cellulose that surround all plant cells and form the basic structure of plant cell walls.

These ribbons of cellulose are made of crystallized sugars. The crystal structure makes it difficult for enzymes to break down the cellulose to the sugars that can be fermented into alcohol for biofuels. And so DeBolt assembled a research team to see if genetic mutations in the plant membrane complex could produce what the researchers have called "wounded" cellulose that's not as crystalline and therefore easier to break down into sugar.

Hong, who had done previous studies of plant cell walls, used her lab's solid-state nuclear magnetic resonance technology to study the cell walls created by the mutated system. The goals were to collect as much information as possible about the molecular structure of the cell walls to see if mutations to the plants resulted in changes to the cellulose.

"We found that the crystalline cellulose content had decreased in the mutant cell walls," Hong said. "We can quantify the degree of change, and be very specific about the type of change."

The cellulose microfibrils in the mutant cell walls, for example, were thinner than those found in normal plants, Hong said. The studies also found an additional type of cellulose with an intermediate degree of crystal structure.

Hong said those findings suggest the genetic mutations did create differences in cellulose production and formation.

The study also reports the cellulose produced by the mutated plant could be more efficiently processed into the sugars necessary for biofuel production.

"What this work suggests, in very broad terms, is that it is possible to modify cellulose structure by genetic methods, so that potentially one can more easily extract cellulose from plants as energy sources," Hong said.

The research team's paper said developing techniques to modify the structure of plant cellulose in crops for better and easier conversion to fermentable sugars "could be transformative in a bio-based economy." 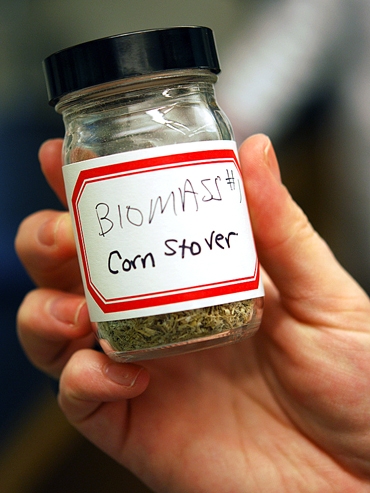