Wheat expert Peter Johnson explains when does it make sense to use a plant growth regulator (PGR) on your wheat crop. 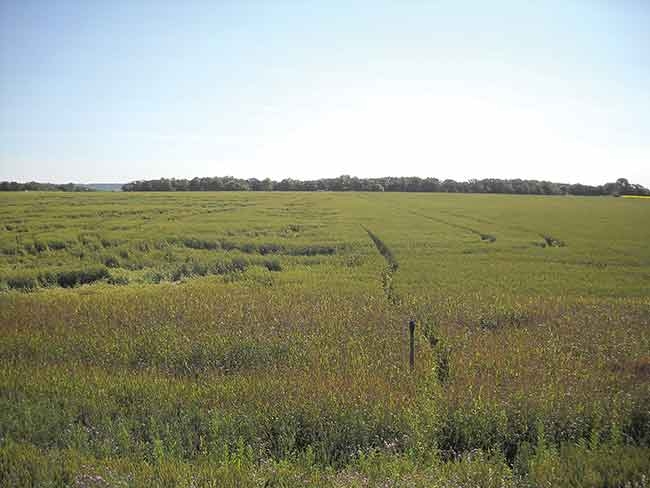 A PGR application can cause shorter plants with thicker stems that are better able to resist lodging.

When does it make sense to use a plant growth regulator (PGR) on your wheat crop? Based on what he has learned from his research, wheat expert Peter Johnson offers some advice to growers.

“We’ve worked with all the growth regulators [for wheat] that I’m aware of,” says Johnson. As the former provincial cereal specialist with the Ontario Ministry of Agriculture, Food and Rural Affairs (OMAFRA), he conducted several PGR trials over the past four or five years.

Most of his research has been with chlormequat chloride (Manipulator, Cycocel Extra), including a four-year winter wheat project with field-scale trials at multiple locations in southwestern Ontario. As well, he’s done a small plot trial involving Engage Agro’s Manipulator on spring wheat.

“We’ve also done a little bit of work with Ethrel [ethephon, from Bayer CropScience]. It is the cheapest growth regulator, at about $10 per acre. But because of the potential for crop injury when the weather works against you, most growers probably aren’t going to take the risk,” he notes.

“And we’ve done some work with Palisade [trinexapac-ethyl], particularly on spring wheat.” This new Syngenta product is not yet registered in Canada, although it is registered in the United States.

Manipulator is the latest PGR on the Canadian market; it is registered for use on spring and winter wheat starting in 2015. “Manipulator is about $14 per acre,” Johnson notes. “I’m quite excited to have another reasonably priced tool in the toolbox when needed.”

However, he cautions, “Right now, Manipulator is not registered in the U.S., so there is some concern around wheat treated with Manipulator being exported to the U.S.” Although chlormequat chloride is registered for use in many wheat-growing countries, the U.S. hasn’t yet established a maximum residue limit (MRL) for it, so wheat treated with it cannot be exported to the U.S. at present. Growers are advised to check with their grain buyer before applying Manipulator, or any other product, to their crop. Engage Agro is working to get the U.S. MRL established as soon as possible.

The MRL issue also affects wheat treated with Cycocel Extra. This BASF product has been available in Canada for a while, but it seems to be targeted for horticultural uses (which are also on its label).

Johnson explains, “Cycocel is still registered for winter wheat but only for specific varieties – and none of the current wheat varieties are listed on the label. Cycocel is being used for things like shortening plants in the flower industry, and it is priced for the horticultural market, at around $40 an acre, so it is priced out of the cereal market.”

A PGR application can cause various responses in wheat crops such as shorter plants (internodes), thicker stems, thicker stem cell walls, less lodging and/or higher yields. The response depends on factors like the particular wheat variety, the PGR type, rate and timing, and the weather conditions.

“People think growth regulators really shorten the crop, but that only happens if something went wrong at application, like the weather got too cold. Typically we’re looking for about a two- to three-inch shorter plant,” he says. “Growth regulators thicken the cell walls in the stem so the plant has better standability. Sometimes you don’t get any shortening whatsoever, but you can still feel the stiffness in the treated crop when you push the wheat plants with your arm.”

Johnson has noticed that PGRs clearly affect spring wheat more than winter wheat, with more dramatic height reductions in spring wheat. “That may be because with spring wheat we are more likely to be able to hit growth stage 30-31, when we can get maximum impact.”

When lodging occurred in Johnson’s trials, a PGR application significantly reduced lodging, but didn’t necessarily completely eliminate it. “In a really lodging-prone situation with a variety that doesn’t stand very well, that you planted early and too thick, and that you whacked with nitrogen, then one application of a growth regulator is not enough. In our research, we’ve only worked with one application. However, in Europe in a situation like that, they would definitely use two applications of a growth regulator. In Canada, we haven’t gone to that extent,” Johnson says.

He notes, “One of the surprises out of some of this research is that even when we go into what we think is a lodging-prone field and we put on more nitrogen than we think we should, often times the wheat will still stand just fine. It really depends on the field and the weather and a whole bunch of other factors.”

He attributes the yield increase to a couple of factors.

“If you apply it right at growth stage 30-31 [as stem elongation starts and the first node appears], one of the growth regulator’s impacts, particularly chlormequat chloride, is to temporarily remove the apical dominance of the plant. So a few more tillers establish what might not have established otherwise, and also the tillers even up so there is less difference in maturity between the main stem and the tillers. However, it’s rare that we can hit that timing on winter wheat because most of the winter wheat gets past us before we can apply the growth regulator.”

Another factor could be the PGR’s effect on the stomates, which are the pores on leaves that allow carbon dioxide to enter, and oxygen and water vapour to escape. “Studies by other researchers show chlormequat chloride keeps the stomates open longer when the plant is under some stress. That allows the plant to have carbon dioxide exchange for a longer period and to continue to photosynthesize under a mild stress when otherwise the plant may not have continued to photosynthesize,” Johnson explains.

“That runs some risk if the crop gets into a stress period during grain fill. When you have higher tiller counts or a bigger plant through more photosynthesis and the stomates are staying open longer and the crop goes under severe drought stress when those stomates need to close or you don’t want those extra tillers, then you could actually see a yield depression from the growth regulator. That has been documented in other places in the world.”

He adds, “We have rarely seen a yield depression [in our work], I think because we rarely get into real drought stress in the grain-fill period. But it is a possibility that people need to be aware of.”

As other studies have found, Johnson’s work shows that response to a PGR depends in part on the crop variety. This was demonstrated clearly in a 2014 trial that he conducted with C&M Seeds, Syngenta and Agriculture and Agri-Food Canada at Ottawa to compare Manipulator and Palisade on spring wheat varieties.

In Variety B, Manipulator shortens it a lot and Palisade doesn’t shorten it as much, and the two together again really beat it up. And Variety C isn’t shortened much at all by either growth regulator. We don’t yet know why one variety reacts one way and another variety reacts a different way.”

Johnson has found Manipulator and Palisade to be “pretty safe from a crop injury standpoint,” but when he tried using a tank mix of the two products at full rates he found there could be serious crop injury.

Regarding tank mixes with herbicides and fungicides, he says, “We’ve done lots of field-scale trials where we have tank mixed the herbicide, the fungicide and the growth regulator. But that is a trade-off scenario. To accurately time the growth regulator to remove that apical dominance and maybe get a few more tillers, you’d want to apply it between optimum weed control timing and optimum fungicide timing.”

He adds, “Under adverse weather conditions, you will see more crop injury with the more things you put in the tank.”

When to consider a PGR

According to Johnson, a PGR can be a useful tool in high-input situations where the wheat crop has high yield potential and a high risk of lodging. Factors that increase the risk of lodging include: early planting; a high seeding rate; a variety with poor standability; high nitrogen rates, especially if all or most of the nitrogen is applied in one application and available during stem elongation; and warm, wet conditions during stem elongation.

“There are lots of ways that a grower can manage lodging without using a growth regulator. You want to employ all those things as well – managing your nitrogen rates and time of application, picking the right variety, and so on. It is a whole management package that you put together,” he notes.

“But at the end of the day, if you really want to push a crop that is on good ground and was planted early and you’re worried about lodging, then using a growth regulator has a fit.”

Johnson is not doing any PGR trials in 2015 because of the current export issue with chlormequat chloride. These days, his challenge on the growth regulator front is to help growers get better at predicting lodging so they’ll be able to make better decisions about PGR applications.

He says, “For example, 2015 is not going to be a lodging year in Ontario. The wheat is incredibly short because of the dry conditions [in May] and somewhat because of some cold injury from the winter. Also, during the stem elongation phase, we had cool night temperatures, almost always around 10 C or lower. When you get those cool nights, the wheat plant doesn’t respire as much, so it doesn’t burn up the photosynthate made during the day and it has more carbohydrate to make strong stems.

As a result in 2015, most Ontario wheat growers probably don’t need a growth regulator to help the crop stand and facilitate harvest. That’s not to say that there won’t be some lodging out there, but it’s not a lodging year.”