In this issue, this column looks at the proper fan selection and the correct use of the time and energy-saver known as venting.

Fans A very important component of any aeration or natural air drying system is the fan. The fan is what moves air through the grain mass in the bin, causing it to be cooled or dried, depending on the application.

As briefly mentioned in the previous discussion about bin and aeration system selection, fan sizing will be determined largely by the ultimate goal of the application. For natural air drying to be successful, a large volume of air must be forced through the grain mass, which means that a larger, more powerful fan is required. For aeration or cooling however, a smaller volume of air and thus a smaller fan are required.

Airflow is typically measured in cubic feet per minute (cu./ft./min.), and there are some general guidelines you can follow to attain proper levels of airflow for each application. These guidelines are as follows:

When aeration is the aim, a minimum airflow of 0.1 cu./ft./min. per bushel, regardless of crop type, is required.

As you’ve probably guessed, a fan’s motor-size and horsepower will determine its ability to affect airflow, with larger, more powerful fans moving a greater volume of air. Thus, a larger horsepower fan will be required for natural air drying over aeration.

Of course, fan size will also be determined by the size of the grain bin being used and the amount of crop to be aerated or dried, with larger bins requiring proportionally larger fans. Another general rule of thumb you can follow when choosing a fan is that horsepower should be increased by a factor of one per every 1,000 bushels of crop you are working with. For example, if you wish to aerate a 5,000 bushel bin full of wheat, you would likely use a five horsepower fan, whereas we’d recommend that you move up to a 10 horsepower fan if you wanted to aerate a bin holding 10,000 bushels of wheat.

For the type of climate conditions found across Western Canada, high-speed centrifugal fans are recommended as the best choice for achieving maximum airflow. These fans are specifically designed to deliver larger air volumes even under high pressure. Low-speed centrifugal fans may also perform well in these conditions, and can provide appropriate airflow volumes in lower static pressure situations such as those where shorter bins or large, flat storage buildings are being used or when the crop is piled.

Now that we’ve covered fans, we’ll move on to discuss venting. Venting is an important and affordable option that can greatly increase the efficiency of new or existing aeration and drying systems.

Vents
To speed up drying and reduce fan horsepower requirements, the installation of wall vents on a grain bin can turn out to be a very good investment. The use of wall vents allows a tall bin to be aerated or dried in different stages or levels, thereby reducing the need to push air all the way to the top of the bin for the entire process.

The greatest benefit of wall vents, however, is that the producer has the ability to control the flow of air throughout the bin. Wall vents also allow for greater control over the conditions in the bin, which can reduce the amount of time required to finish the task and increase efficiency, which helps keep some of your hard-earned cash in your pocket.

There is no real rule of thumb for the placement of this style of vent, as wall vents can be placed intermittently along the height of the bin.

Roof vents and their placement are another important component of aeration or drying systems that can help provide proper airflow in both applications. Even when fans are not running, natural convection currents move throughout the grain when its temperature is warmer than the temperature of the ambient air above it. The use of roof vents prevents the warm, moist air that travels upward from becoming trapped up in the peak of the bin roof, where contact with cold roof panels can create condensation. This condensation can then drip down into the grain creating spoilage.

The use of roof vents, however, allows the moist air to escape and greatly lessens the chance of moisture collecting on the inside of the roof.

Now, when it comes to determining the correct number of roof vents needed, and locating them on your bin’s roof, there are some general guidelines that you can follow. When trying to decide upon an appropriate number of vents, as a general rule, we recommend one square foot of venting for every 1,000 cu./ft./min. of airflow required for the application. As we’ve already noted, the amount of airflow required will largely depend on the application – natural air drying versus aeration – and the size of the bin and grain mass. By now we’re sure you’ve noticed how all of these concepts are tied together.

As far as placement goes, roof vents should be positioned approximately one-third of the way up the roof from its lowest point, which will help encourage convection drafts out through the vents.

On larger-diameter bins, you should also place additional vents at two-thirds of the distance up the roof sheet.

Next time the series will discussing the various styles of aeration duct and flooring perforations, and how to select the correct one for your application.

For further information, got to www.grainguardian.com 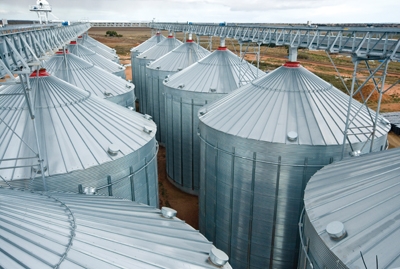 Roof vents help to prevent condensation from building up on the inside of the bin roof. In this issue


Related
Time to turn on aeration fans for canola
Innovations in crop planning
Shelterbelt planning and design
Succession planning: How to choose a successor