Better access to data and tools for faster crop improvement for sunflower, flax and lentil. 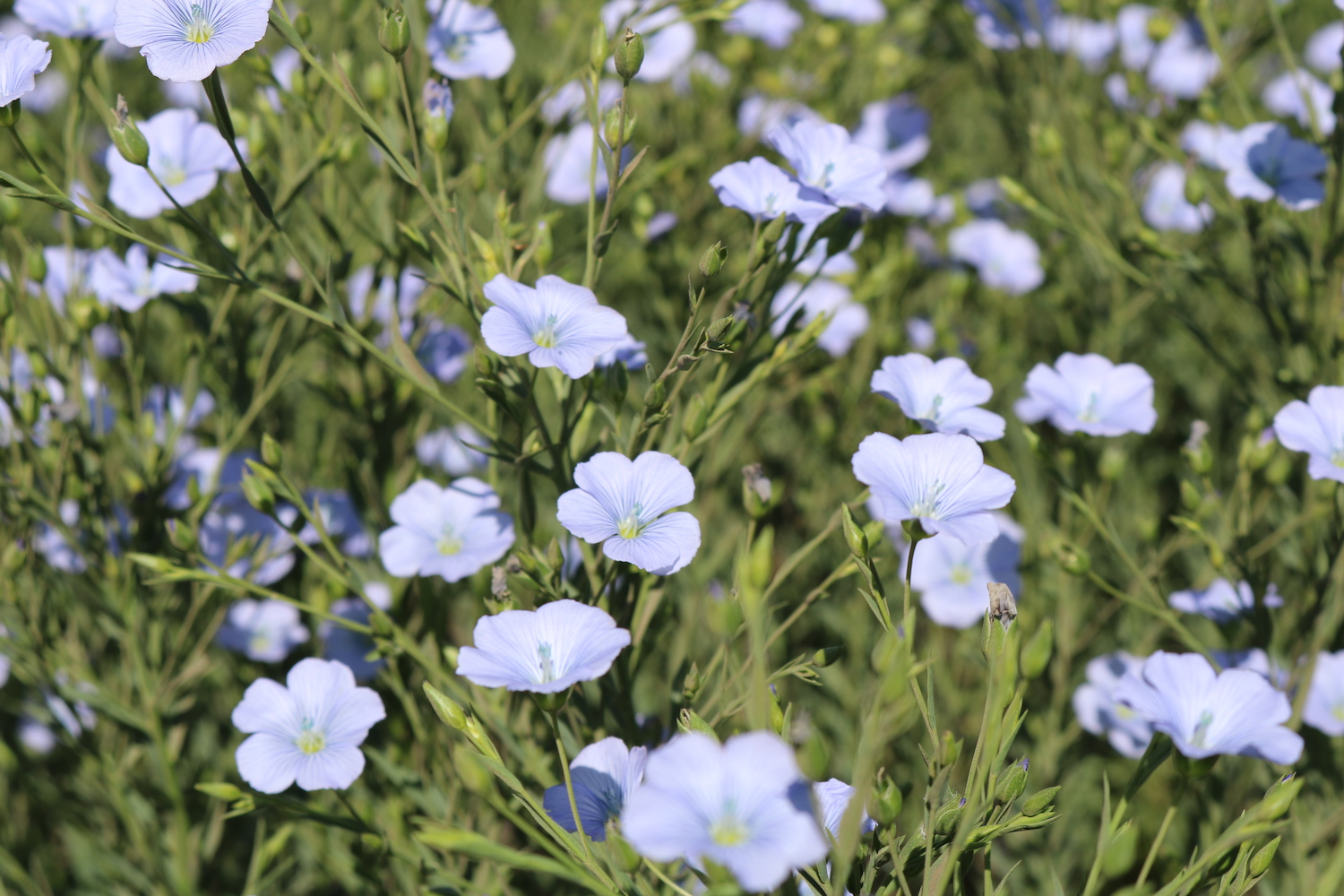 These days, the amount of crop genomic data is growing by leaps and bounds, but the ability of crop breeders to easily access and use the data is not keeping pace. Now, a Canadian pilot project is underway to develop user-friendly genomic databases for sunflower, flax and lentil.

The project is part of the international DivSeek initiative to advance crop breeding by unleashing the full potential of the genetic diversity in the world’s gene banks. Loren Rieseberg, an expert in sunflower genomics, is leading the project.

The larger goal is to accelerate plant breeding in Canada and elsewhere by filling a gap where we don’t have these kinds of breeding hubs for small to medium crops.

“The project’s goal is to make all of the genomic and phenotypic data that Canadian researchers have been developing for lentil, flax and sunflower more useful to breeders and others. The larger goal is to accelerate plant breeding in Canada and elsewhere by filling a gap where we don’t have these kinds of breeding hubs for small to medium crops. For the big crops, there are international sites that serve this mission,” notes Rieseberg, who is a professor in the department of botany and the director of the Biodiversity Research Centre at the University of British Columbia (UBC).

“Right now, for many small to medium crops, if there is an electronic genomic resource, then it tends to be on somebody’s computer server at a university or Agriculture and Agri-Food Canada (AAFC) or other research agency. That is not a long-term, safe repository for this information.” And sometimes it doesn’t allow other researchers to have easy access to the data.

Why choose flax, sunflower and lentil?

He explains that flax, sunflower and lentil were chosen for this pilot project for several reasons. First, lentils and flax are important medium-sized Prairie crops. Sunflower is a speciality crop in Canada, but it is important globally.

“Another factor is that Genome Canada [a federally funded, not-for-profit agency] has invested a lot in developing genomic resources for these three crops. So the leading players in the world for lentil, flax and sunflower genomics are in Canada.”

As well, the three crops represent different stages of genomic database development. He explains that lentil already has a pretty good database, which is part of the University of Saskatchewan’s pulse database. Rieseberg’s research group at UBC maintains a sunflower database. A genome database for flax is under development, but it is not yet publicly accessible.

The project involves a large, multidisciplinary team. One key member is bioinformatician Richard Bruskiewich, who is coordinating the project. Bean breeder Kirstin Bett and her research group, who work on the University of Saskatchewan’s pulse database, bring a lot of expertise to the project. Helen Booker, the flax breeder at the University of Saskatchewan, and flax genomic researchers Frank You at AAFC-Morden and Sylvie Cloutier at AAFC-Ottawa are critical for the flax database work. Other key members include Evan Staton, a bioinformatician in Rieseberg’s group at UBC, and Andrew Warfield, an associate professor in UBC’s computer science Department.

The project kicked off in July 2018, and the team hopes to have a prototype database for each of the three crops in about two years. 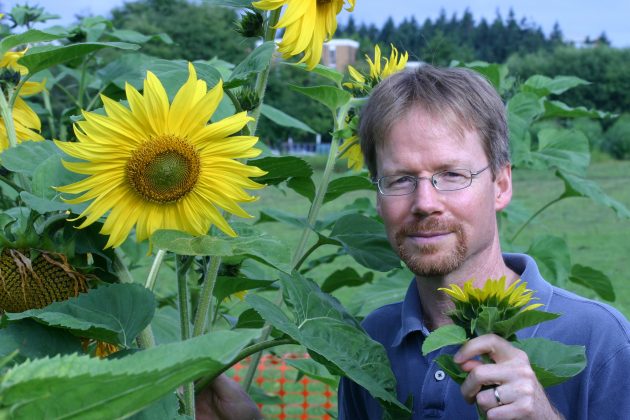 Rieseberg is leading a project to provide breeder-friendly access to genomic data for sunflower, flax and lentils. Photo courtesy of Nolan Kane.

Features of the proposed database

A major function of each proposed database will be to link together the different types of available data for each germplasm accession (genebank seed sample). In other words, the database will link each accession’s genotype data – the details of its individual genetic makeup – with its phenotype data – the characteristics it expresses under different environmental conditions.

In many cases, the genotype and phenotype data are already available somewhere. So the project team’s main task will be to bring together existing datasets and connect them through an easy-to-use, electronic platform.

Each database will also provide a broader genomics context for the genotype/phenotype data, including a detailed reference sequence for the crop’s genome, high-density genetic maps, and other types of baseline genomic information. That context will make the accession-specific data even more informative.

The three databases will also provide practical tools to help breeders and others make better use of the data. Rieseberg says, “One of the things I have found surprising is that, even with the big crop databases, you can’t just go into a database and type in a particular trait and access [the data and tools that a breeder would want regarding that trait].”

For example, let’s say you are interested in improving downy mildew resistance in your sunflower breeding lines. With the proposed sunflower database, “you would be able to type in ‘downy mildew resistance’ and pull up which accessions have that trait. You would also be able to find out which accession with that trait is most closely related to your elite line, so that [crossing your elite line with that accession would] minimally impact the lines that are being developed.”

For example, let’s say you are interested in improving downy mildew resistance in your sunflower breeding lines. With the proposed sunflower database, “you would be able to type in ‘downy mildew resistance’ and pull up which accessions have that trait. You would also be able to find out which accession with that trait is most closely related to your elite line, so that [crossing your elite line with that accession would] minimally impact the lines that are being developed.”

Also, the database would allow you to easily find out where in the sunflower genome the genes for downy mildew resistance are located. And it would provide access to breeder tools, such as molecular markers. These markers would allow you to screen your breeding materials for the trait in the lab, without the time-consuming, costly effort of growing the seeds into plants, exposing them to the downy mildew pathogen, and rating the plants for mildew resistance/susceptibility.

As with the accession data, the project team’s primary task with the tools will be to add connectivity. Rieseberg notes, “The breeders’ tools are already fairly well developed and so are the genomic and phenotypic tools, but there are gaps in the connectedness.”

The team has consulted plant breeders from private and public agencies as well as genomic researchers and others to find out what they would like from the databases. For many breeders, simple information – like which accessions have which traits and how closely individual accessions are related to each other – is quite important. But some other breeders and researchers are very interested in tools such as molecular markers for traits that can be used for marker-assisted selection. And in the years ahead, more and more users will likely be interested in these tools.

Overall, the development of these databases is expected to accelerate the breeding cycles for sunflower, lentil and flax.

This pilot project could potentially be a springboard for the development of similar databases for other crops, contributing to more efficient crop breeding in Canada. But the project is also part of a bigger international picture.

Rieseberg believes acceleration of crop breeding in Canada will be increasingly crucial in feeding a hungry world. “Crop yields are expected to decline in much of the world with climate change, but in Canada yields and the amount of available agricultural land are going to go up. So Canada will really have to step forward and fill the yield gap.”

He also notes, “The planned bioinformatics resource will help Canada become fully compliant with the International Treaty on Plant Genetic Resources for Food and Agriculture. [Under this treaty,] Canada has agreed to develop mechanisms for sharing germplasm as well as the genetic, phenotypic and genomic information that is associated with that germplasm.”

From Rieseberg’s perspective, “crops are international” so national or international agencies should actually be undertaking the genomic database work. “The USDA [United States Department of Agriculture] has created very good maize and soybean databases, and those are international resources. But this work hasn’t been happening for smaller crops. I’ve talked to the USDA for years about sunflower and never could get the uptake on it.” If the USDA or other large agency does initiate work on databases for lentil, sunflower and/or flax, then the pilot project’s databases could potentially feed into that work.

“Really, the United Nations under the international treaty should be doing this work. In the long-term, it would make a lot of sense for each crop to have a single international site that was mirrored in different countries. But it’s hard to say how this all will sort out,” he says.

“This is something that we really need. Everyone is generating huge amounts of genomic and phenotypic data. We need to make sure the resources that we have spent so much money producing are not lost and are actually used to produce better crop varieties. Our project is a small effort toward those big goals.”

Rieseberg emphasizes, “This is something that we really need. Everyone is generating huge amounts of genomic and phenotypic data. We need to make sure the resources that we have spent so much money producing are not lost and are actually used to produce better crop varieties. Our project is a small effort toward those big goals.”

The project’s funders include Genome Canada, Genome British Columbia, Genome Prairie, UBC, and the Global Institute for Food Security at the University of Saskatchewan. Compute Canada is providing the computational platform for the project’s databases for free.