Growers have various options of phosphorus (P) fertilizer forms and placement methods for their cropping systems. However, there is limited information on how different P fertilizer forms may behave as available P sources for crops when added to Prairie soils, and no information on how they relate to P export off-site in comparison to conventional mono-ammonium phosphate. A recent research project is focused on identifying the most effective sources and placement methods, which can improve efficiency, return on investment, and reduce losses to the environment.

“The goals of this three-year project include both agronomic and environmental components of fertilizer P management in a cereal-pulse-oilseed rotation,” explains Jeff Schoenau, professor of Soil Science at the University of Saskatchewan. “The agronomic objectives are to identify the effective and efficient P sources of fertilizer, as well as the most appropriate rate and method of application to maximize crop recovery, yield response and use efficiency. At the same time, managing P sources to minimize losses of dissolved P to water in runoff is an important environmental objective. Our team, including project lead and PhD student Blake Weiseth, is working in collaboration with research scientists Jane Elliot, National Water Research Institute and Derek Peak, Department of Soil Science, to help investigate the fate of fertilizer P in soils using a combination of chemical and spectroscopic techniques.” 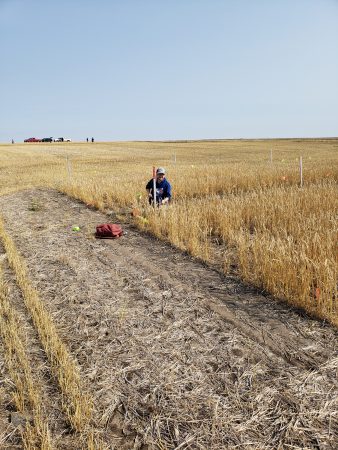 Eight different forms of phosphorus are being compared in the study, including conventional and coated mono-ammonium phosphate and liquid polyphosphate products, ammonium phosphate sulfur combinations, struvite and rock phosphate applied in broadcast and banded placement methods. Study treatments include three different fertilizer rates: 0, 20 and 40 kg P2O5/ha. All of the fertilizer is applied at the time of seeding either placed in the soil in the seed row or in a separate band, depending on crop sensitivity and rate, or broadcast on the surface of the soil. Several factors will be assessed, including crop and biomass yield, crop P uptake, soil residual P, and dissolved reactive P in simulated snowmelt run-off/leachate.

“This research follows up on our earlier work comparing different placement methods for a single form of traditional mono-ammonium phosphate and other work including a collaborative project lead by research scientist Patrick Moolecki with Agriculture and Agri-Food Canada that just wrapped up,” adds Schoenau. “In that study we looked at the recovery of fertilizer P by canola when added at different rates in the seed row and the interactions with row spacing and opener spread at a number of locations across Western Canada. I also had a graduate student who compared two forms of P fertilizer, struvite and mono-ammonium phosphate, in a controlled environment growth chamber. This new study follows up on that research where we are taking those treatment comparisons from a controlled environment and out into the field.”

This current project includes three crops in rotation, wheat-pea-canola, and two main field trial locations with contrasting soil properties and climatic conditions. The Langham Discovery Farm location represents the dark brown soil climatic zone, while the second location at Central Butte represents the brown soil zone. At Central Butte, there are two sites representing two different slope positions including a knoll and a depression. This allows for comparison of performance of different sources of P and their interaction with rate and placement at different topographical positions of the field.

“The topographical component was included in order to provide typical management zones that may be used in a variable rate P fertilizer application prescription,” Schoenau says. “We know that with precision fertilization, lower and upper slopes within a field are likely to respond differently to fertilizer application. Therefore, we have designed complete response trials on each slope position. By comparing the contrasting soils and topography we can look at modelling some of these topographic effects, which also control water movement and potential export of P in runoff water.”

To efficiently assess the amount of P that could potentially move off the field during runoff, simulated snowmelt studies are being conducted in the lab. In the fall after harvest intact soil slabs are collected from each plot at the field sites and taken back to the lab. “We do a simulated snow melt by applying snow to the slabs in a controlled environment room to look at the forms and amounts of P that are contained and removed in snowmelt runoff under controlled conditions. Using simulation, although not a perfect representation of what is going on in the field, gives us the opportunity to include a lot of different treatments with a high degree of replication and provides us with a relative idea of how those different treatments are affecting potential P movement offsite in snowmelt runoff.”

In the first year of the study in 2021, wheat was grown at both study sites. “Despite the very dry conditions at both locations, we are seeing some significant responses to various treatments in the preliminary yield data,” explains Schoenau. “Particularly in the lower slope sites at Central Butte, we found a significant source by rate interaction and source by method of placement interaction, and some overall response to P fertilizer rate. Some of the mono-ammonium P and sulfur combination products showed yield responses of wheat to the P application. We also found that the method of placement influenced performance, with in-soil application not surprisingly being superior to broadcast application. Even under very dry conditions that limited response to additional fertilizer because of low crop demand, we still saw a positive yield response to placement. However, we need to have time to take a detailed look at the data, including the post-harvest soil and runoff data, and once that analysis is complete we will have a better idea of performance with spring wheat.”

In the 2022 field season, field pea will be seeded at both locations, followed by canola in 2023. “We are hoping to see more normal precipitation over the next two seasons to get a middle-of-the-road measure of the impacts on crop nutrition and the fate of P in the soils,” adds Schoenau. “By identifying the most effective sources and placement methods of fertilizer P, growers can improve efficiency, return on investment, and reduce losses to the environment in farming systems and contribute to advanced 4R nutrient stewardship practices promoted by industry.”