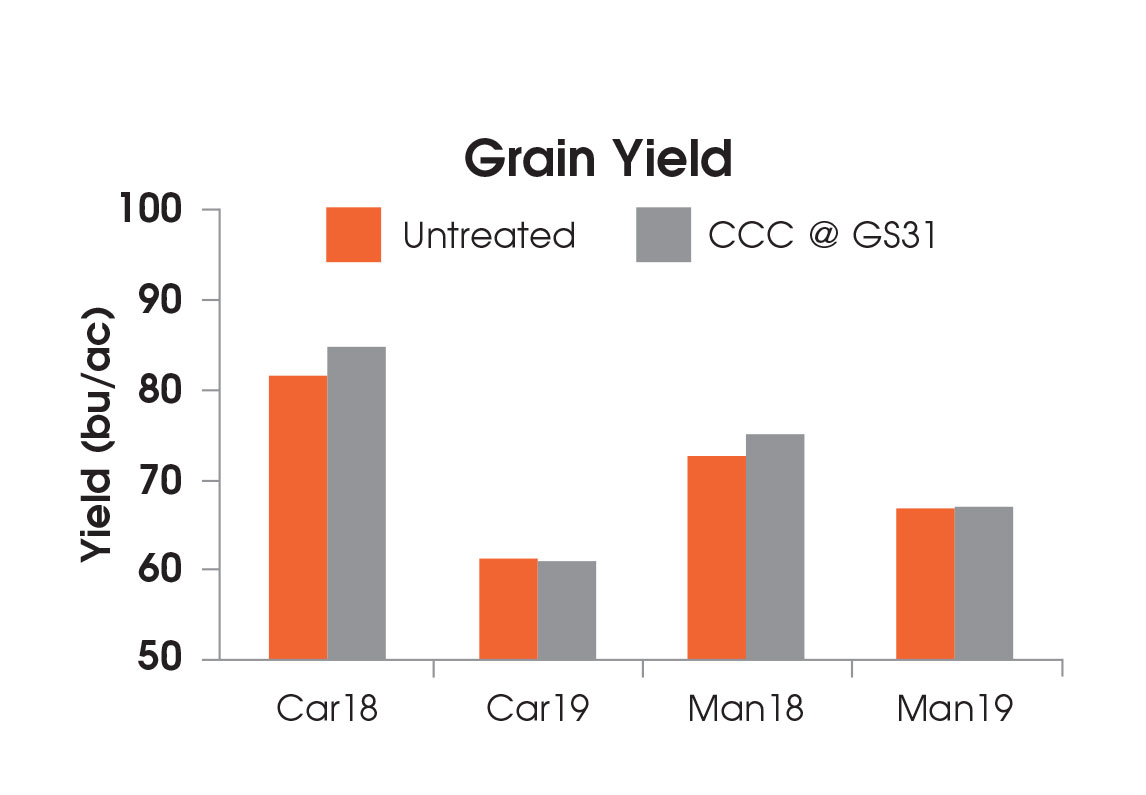 My overall project is called “Agronomic Strategies to Minimize Lodging Risk While Maximizing Yield and Protein Content in Spring Wheat” and it was done for my PhD thesis. I looked at different varieties, different nitrogen rates, sources, and timings, as well as seeding rates and plant growth regulator applications. Today, I’m going to focus on the plant growth regulator treatments that were within these trials, which ran in 2018 and 2019 at Carman and Manitou, Man. In these trials, Manipulator was applied at the single application rate of 0.7 litres per hectare and compared to an untreated control. Application was at growth stage 31-32, and this typically fell around the second week in June.

The overall project looked at three main objectives: how agronomic management treatments affected yield components, nitrogen dynamics, and lodging risk of spring wheat. Over the two years, our sites fell well below the long-term average growing season precipitation from May 1 to September 1. The 2019 site years had the lowest growing season precipitation of the two years, and also came off of a dry fall from 2018. That led to lower than normal yield potential at those sites and also low lodging pressure.

Looking at the three main yield components helps to unwrap why or how these yield increases came about. Spike density was counted around flowering time to soft dough. There was a spike density increase only at the Carman 2018 site with Manipulator. This increase in spike density was likely due to increased tiller survival rather than an increase in tiller production.

There was an increase in kernel number per acre at three out of the four sites – the two 2018 sites, as well as Manitou in 2019. The increase was likely a combination of increased spikes per acre and also increased kernels per spike (decreased floret abortion). We probably saw resources being reallocated and repartitioned from stem growth towards the developing head at that time.

We saw a decrease in kernel weight at every one of our sites, regardless of the yield response to Manipulator. The decrease in kernel weight was likely due to the increase in demand for resources across more kernels in these dry years. The grain fill period was shorter and with more kernels to fill, the plants actually didn’t have time to fill the kernels – resulting in lower grain weight.

Manipulator influence on nitrogen dynamics
When I say “nitrogen dynamics,” I mean dynamics within the plant – when is the nitrogen taken up, where the nitrogen is within the plant, and how it is moving to form final grain nitrogen (protein) content. In spring wheat, about 60 to 90 per cent of nitrogen is taken up by anthesis and stored as vegetative tissue of stems, leaves and chaff. After anthesis during the grain fill period, some of that nitrogen is remobilized and moved into the head, to make up grain protein content. Looking more in depth at stem tissue, research has classified that 60 per cent of the nitrogen in stem tissue was from reserve pool nitrogen. It didn’t actually serve other functions in the plant, such as structural, metabolic, or transportation functions.

We looked at how some of our agronomic management practices influenced this relationship of when the plant took up nitrogen and how it moved within the plant. We separated the plants into stems, heads, and leaves, analyzed them for nitrogen content, and assessed the movement from anthesis to maturity.

Overall, grain protein content was high across these four sites because of the dry growing seasons, ranging from about 13.9 per cent to about 14.2 per cent in the untreated plots. With Manipulator application we saw a decrease in grain protein content regardless of a yield increase. That decrease couldn’t just be attributed a dilution effect from nitrogen being spread over more yield. We saw some of the largest protein decreases at sites that we didn’t have a yield increase.

In the untreated plots, we found about 70 per cent of the nitrogen was taken up by anthesis, which is similar to some of the background literature. But the Manipulator application significantly decreased the amount of nitrogen that was taken up in that pre-anthesis period. But by maturity, nitrogen uptake was similar between untreated and treated, so the total nitrogen uptake for the entire season was very similar.

There was a significant reduction in stem nitrogen content. As you would expect, shorter stems mean there is less stem tissue to store nitrogen. There was a similar trend in the leaves and the heads, but it wasn’t significant. At maturity, the majority of the nitrogen had moved to the head tissue, and there were no differences between nitrogen content in any of the plant parts at maturity between treated and untreated plots.

There was a significant decrease in the amount of nitrogen remobilized from stem tissue to the head with a Manipulator application. This could potentially explain some of the differences in protein content, because there is less nitrogen being moved up into the grain. There was a similar trend with leaf tissue, but it wasn’t significant. Overall, around 70 per cent of the stem tissue nitrogen was remobilized across treatments, and around 80 per cent of leaf tissue nitrogen was remobilized. 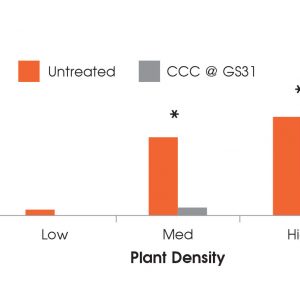 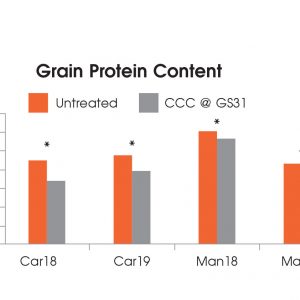 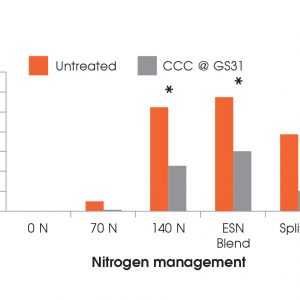 Manipulator influence on lodging risk
The two field seasons weren’t great years for lodging because of the dry conditions but I did get lodging ratings for Manitou in 2019. There were a couple heavy rainfall events later in the season when lodging occurred. When lodging occurred, there was an interaction with nitrogen management as well as plant density. When over 140 pounds of nitrogen per acre was applied, there was a decrease in lodging with Manipulator application. And with medium (25 plants per square foot) to high (35 plants per square foot) plant densities, lodging was occurring, and Manipulator was reducing that lodging.

We also looked at stalk strength as a proxy for lodging because in small plots, it’s not always likely that you’re going to have lodging or differential lodging within each treatment. We used a tool to measure stalk strength. Resistance force was measured as the crop was pushed from vertical to 45 degrees from vertical. This was done at anthesis and maturity to see if we could see differences between our treatments.

There was a reduced canopy height with Manipulator application at all sites across all varieties. I did see a magnitude interaction between site year and PGR, and cultivar and PGR. This means that the degree of the height reduction was different across the different sites and across the different varieties. For example, AAC Cameron had a greater height reduction than Prosper. Overall the height reduction was about two inches (five centimetres) when measured at soft dough stage. If I had measured at anthesis, I probably would’ve seen a little bit bigger height decreases.

We looked at internode length measured from the second basal internode two weeks after application. We chose that internode because that’s likely one of the internodes where you’re going to see breaking that causes stem lodging. Manipulator did decrease the length of that internode. We also measured the diameter of the stem thinking that if the internode was smaller, we might have thicker stems. There was no difference between treated and untreated in terms of stem diameter with Manipulator.

We also looked at structural root plate – the area of the root core that has thickened, lignified roots. Research has indicated that the area with those thick, lignified roots is really what is providing anchored strength in your wheat crop. It’s not necessarily the amount of total roots, but the spread as well as the depth of that structural root plate.

We dug up, washed and measured a whole lot of roots. At Carman 2018, there was a significant increase in root plate spread with Manipulator, which is something that hadn’t been documented before so we weren’t expecting that. We also saw that root plate depth was increased at three out of the four site years with Manipulator application. Potentially, the resources that were used previously for stem elongation are now being reallocated to root growth and increasing that structural root plate. This means there may be increased anchored strength as well as stem strength with some of these Manipulator applications.

We also look at stem composition by measuring lignin and cellulose, which are thought to have a really good relationship with lodging potential. For lignin, there were no differences between treated and untreated. There was a significant decrease in cellulose content with Manipulator application. We’re still kind of looking into more reasons why we might have been seeing this.

In summary, grain yield increase happened 50 per cent of the time at two of four sites, but it was at the higher yield potential sites, and the yield increase was only three to five bushels an acre averaged across all of my treatments. That yield increase occurred from increased kernels per acre because we did actually see a decrease in the kernel weight across all sites. So, we saw more kernels, but they were lighter. Grain protein content was decreased at all sites with the treated plots. Stem nitrogen content at anthesis was reduced with the Manipulator application, and that led to reduced stem remobilization of nitrogen. There was a reduced lodging risk with Manipulator application in the high-risk situation of high nitrogen fertility and high seeding rates. Decreased canopy height reduced our plant and stem leverage. We had increased anchored strength at three out of four sites, and we didn’t actually see any differences in structural composition with Manipulator application.