Lodging can be a serious problem, especially in irrigated crops. Of course, variety selection and nutrient management are important tools for managing lodging. But producers may want to grow a crop variety with not-so-good standability because it has other important traits, and they may want to use higher nitrogen rates to capture a crop’s full yield potential, so four Alberta studies have investigated plant growth regulators (PGRs) as another tool for reducing the risk of lodging. 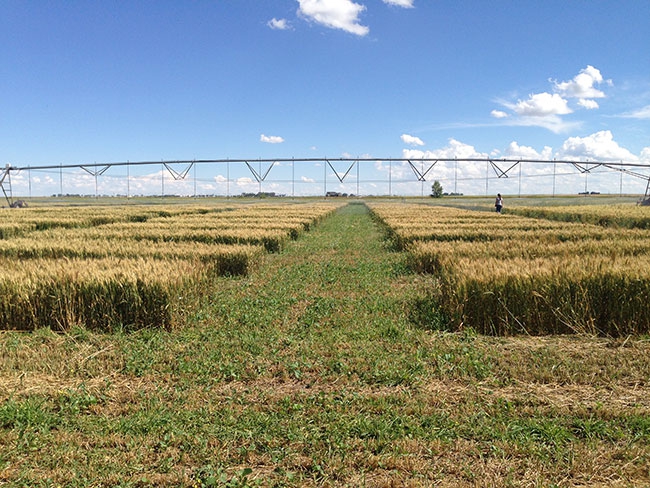 “Plant growth regulators are synthetic compounds that impact the hormonal activity of the plant. The PGRs we are looking at work by affecting the plant’s gibberellin biosynthesis,” explains Sheri Strydhorst, a research scientist with Alberta Agriculture and Forestry (AAF). “You don’t have as much active gibberellin in the plant when these plant growth regulators are applied, so you tend to get shorter plants and possibly thicker stems. That height reduction lowers the centre of gravity and if stem thickening occurs, that may help address lodging as well.”

Strydhorst and her team conducted four small-plot studies in wheat and barley. The studies ran from 2014 to 2016 at five locations across Alberta, including irrigated trials at Lethbridge, run by AAF’s Doon Pauly and his technical crew. The four studies each had three site-years for the irrigated trials. In addition, the wet weather and good growing conditions in 2016 meant the other study sites had the equivalent of irrigated conditions, so Strydhorst’s assessment of the value of PGRs under irrigated conditions includes some of the 2016 data from the other sites.

One of the four studies involved comparisons of two PGRs on AC Foremost, a Canada Prairie Spring Red (CPSR) wheat. The PGRs were: Manipulator (chlormequat chloride, from Engage Agro); and trinexapac-ethyl (from Syngenta), which is not yet registered. The PGRs were applied at growth stage 30 to 32, at the rate recommended by the respective companies.

Another of the four studies tested Manipulator on Amisk, a semi-dwarf feed barley. No PGRs are currently registered for barley in Canada, and at the start of Strydhorst’s study, very little Canadian research had been done on PGR timing and rates in barley. As a first crack at the issue, Strydhorst’s team applied Manipulator at the growth stage used for wheat. They applied the PGR at a 25 per cent higher rate than the wheat rate because research from other countries has shown barley tends to be less responsive to PGRs than wheat.

The other two studies looked at effects on different cultivars under a set of standard management versus advanced management practices. One study tested 12 wheat varieties in four classes and the other tested 10 feed barley varieties. The advanced practices included an application of Manipulator, an extra 30 pounds of nitrogen per acre and a dual fungicide application.

Key findings
“In the AC Foremost wheat study, we tended to see height reductions with Manipulator ranging from about four to 11 centimetres. With trinexapac, we saw a two- to six-centimetre height reduction,” Strydhorst says. However, the plots in this study didn’t have good lodging in most cases, so it was difficult to evaluate whether the PGRs improved standability.

In the study with 12 wheat cultivars, the response to a PGR depended on the cultivar. Strydhorst compares responses in two Canada Western Red Spring (CWRS) wheats: “Stettler is the largest-acre CWRS wheat grown in Alberta. Its height decreased from 88 to 80 centimetres with a PGR, about a 10 per cent decrease. But in only one of our 14 site-years did Stettler stand better with a PGR. However, in CDC Go, which is another fairly popular CWRS in the province, the height decreased from 83 to 77 centimetres, plus it had standability improvements.”

There could be several reasons why height reductions don’t translate into better standability in some cultivars. For example, a cultivar might be prone to root lodging (where the root system’s anchoring ability fails) rather than stem lodging (where the stem buckles). Although shortening the plant would help by lowering the plant’s centre of gravity, a PGR wouldn’t strengthen the plant’s root system.

Strydhorst suspects the PGR treatment used in these barley studies is not optimum, based on preliminary results from a different project. Strydhorst is collaborating with Linda Hall from the University of Alberta on this new project, comparing different PGR actives, tank mixes, rates and timings in barley and wheat cultivars. The results from the project’s first year showed better responses in barley with different treatments.

What this means for growers
“Our research shows PGRs are improving standability of some wheat cultivars but not all, so my advice to growers would be that if you are planning to use a PGR, make sure to use it on a cultivar that responds to the PGR. And be aware that just because you have a cultivar that lodges, adding a PGR may not necessarily solve that problem,” Strydhorst says.

Strydhorst is pleased to see recent steps forward on registrations for the two PGRs. In January, Syngenta sent its application to register trinexapac in cereals to Health Canada’s Pest Management Regulatory Agency. And, as of October 2016, durum is now on the label of Manipulator, which was already registered for spring wheat and winter wheat. Note that the U.S. hasn’t yet established a maximum residue limit (MRL) for chlormequat chloride, so crops treated with this product cannot be exported to the U.S. at present. Engage Agro hopes the MRLs will be in place for 2018.

Strydhorst concludes: “We still need to work out the kinks and figure out what will work best on barley for PGR rates, timing and actives, as well as this whole piece on which cultivars are responding to PGRs, particularly with wheat. So we don’t have it all figured out yet, but I’m glad to see continuing research.”