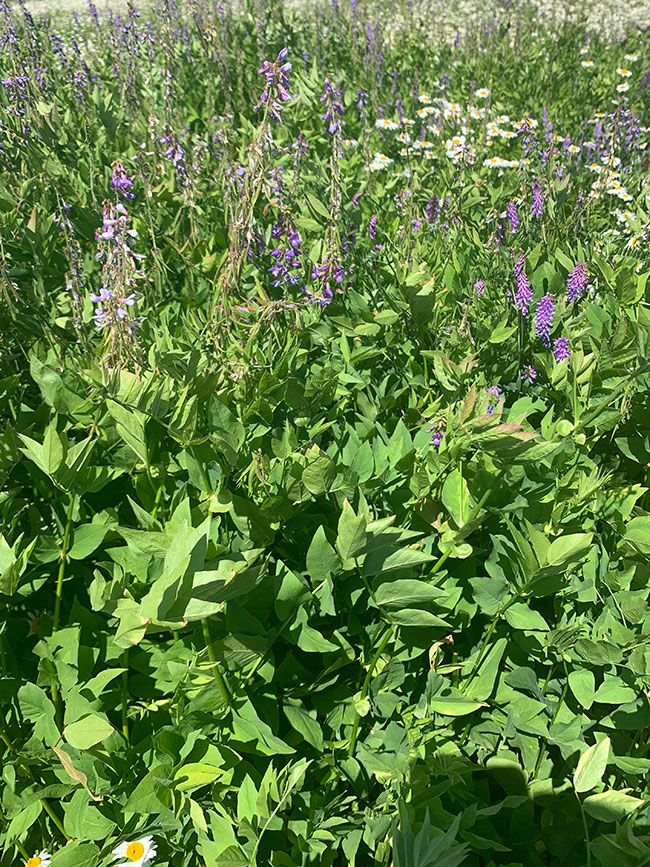 Galega is a weak competitor in its establishment year, so one project looked at weed control options in new galega stands. Photo courtesy of Mikala Parr/RAIN.

What are the best options for perennial legume forages in northern Ontario? To answer that question, the Rural Agri-Innovation Network (RAIN) and the Lakehead University Agricultural Research Station (LUARS) partnered in two projects.

These two agricultural research agencies serve regions where forage production is a priority. “Forages are an integral part of the farming systems in the Thunder Bay area and northwestern Ontario, and they are an important part of our research at LUARS,” notes Tarlok Sahota, director of LUARS.

Research technician Mikala Parr with RAIN, which serves the Algoma District, says, “Hay grown for livestock feed is the most common crop in Algoma, making up about one-third of the total land and over three-quarters of cropland in current use. Algoma is also particularly invested in the raising of cattle. Since hay is such a vital crop in our area, we focused on projects looking at how to introduce new legumes to the area and how to improve stands.”

The two three-year projects, which both started in 2018, were funded by the Canadian Agricultural Partnership and FedNor.

Alternative legumes project
One of the projects compared five perennial legume forages: alfalfa, red clover, sainfoin, birdsfoot trefoil and galega, a fairly new crop for Northern Ontario. The project took place at two field sites, one conducted by RAIN and the other by LUARS.

“This project was a way to show what other forage options are out there for our producers,” Parr says. “Alfalfa is one of the most popular legumes in our area. Although there are not many pure alfalfa stands, most growers have alfalfa mixed into their hay stands. Red clover and trefoil are next in line in popularity. Sainfoin and galega are definitely not common.”

All five legumes have been tested before in the Algoma region, but this experiment was the first time that all were grown at the same location, allowing for direct comparisons of yield, quality and winter survival.

Over the years, LUARS has done quite a few trials with various alternative legumes, especially galega. The station has a galega stand, seeded in 2011, that is still producing great yields and quality. “Once galega gets established, it can overpower even perennial weeds such as dandelion and Canada thistle. The only negative point is that it cannot take competition in its establishment year. And if the stand is weak in the establishment year, then it will not produce a good crop in the next year,” Sahota says.

“Generally speaking, in our area, sainfoin can yield up to 90 per cent of alfalfa. However, it is not as persistent as alfalfa; after a few years, the sainfoin stand’s productivity will go down. The big advantage with sainfoin is that it doesn’t cause bloating. [Studies have shown that] if you have 25 or 30 per cent of sainfoin in an alfalfa stand, the bloating problem with alfalfa could be overcome.”

The RAIN experiment was conducted at the Algoma Community Pasture in Thessalon, and the LUARS experiment was at the research station. At both sites, the plots were plowed down in the fall, disked in the spring and then sprayed with Roundup (glyphosate) right before planting. The plots were fertilized according to the provincial recommendations for alfalfa.

The galega inoculant (Rhizobium galegae) is difficult to obtain and was not available for this project. To provide a consistent comparison, none of the legumes were inoculated.

At both sites, the plots were seeded at the following rates: alfalfa at 13 kilograms per hectare (kg/ha); galega at 35 kg/ha; red clover at 11 kg/ha; sainfoin at 30 kg/ha; and birdsfoot trefoil at nine kg/ha.

The plots were not harvested in the establishment year. Forage yield and quality data were collected in the second and third years of the experiments.

RAIN’s alternative legumes results
Parr summarizes the key findings for the RAIN project: “Red clover, trefoil and alfalfa were definitely the top legumes in yield quantity and forage quality. Galega’s performance wasn’t bad, but it wasn’t as great as the alfalfa, trefoil and red clover. Galega is known to be a poor competitor when it is becoming established, so that could be a factor in its lower yields. Sainfoin did not overwinter very well [in the 2019/2020 winter] and had a pretty poor yield in 2020.”

“Red clover, trefoil and alfalfa are used all over Ontario for a reason,” Parr concludes. “This project shows that those legumes are the top contenders for yield and overwinter survivability. My advice to growers in the Algoma area would be to have at least one of these three legumes in your hay mixes, depending on your end-goal.” 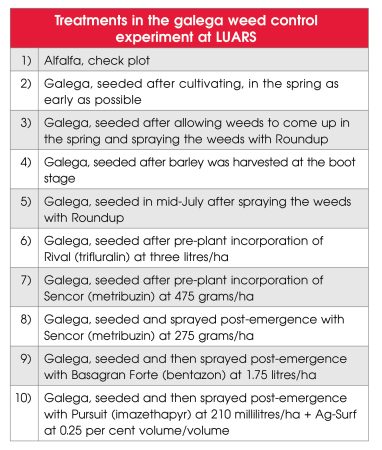 LUARS’s alternative legumes results
At LUARS, the plots were seeded on poor soils in 2018 and the weather was dry, so none of the plots did very well that year, which affected the 2019 results.

Sahota and his team also decided to conduct this field experiment again in 2020, this time using relatively normal plot land. They will be analyzing the 2021 yield and quality data for these new plots this fall.

His advice on alternative legumes for growers in the Thunder Bay region: “Continue with alfalfa and experiment with other legumes, especially galega, in a small area – perhaps 20 to 30 acres – and expand the acreage if you get good results.”

“Our area has had successes and failures with alternative forages at the farm level over the years,” he adds. “Farmers can be reluctant to give an alternative forage a second try if it runs into a problem like winterkill. But winterkill can happen in any perennial forage, even alfalfa.”

“The objective of the RAIN project was to find the optimum seeding time of galega in the establishment year in terms of weed control and yield,” Parr explains. “Since galega is a new forage to the Algoma area, we also wanted to see if it could be added into producers’ rotations or into their hay mixes.”

The RAIN plots were planted in 2018 at Bruce Mines. Using alfalfa as a check plot, the experiment compared two planting time treatments. In one treatment, galega (seeded at 30 kg/ha) was planted as early as possible, which was mid-June. Before seeding they disked the field and, if any weeds were present, sprayed them with Roundup, providing a clean seedbed. In the other treatment, galega (seeded at 30 kg/ha) was planted in mid-July, after allowing the weeds to come up and spraying them with Roundup.

She concludes, “Seeding galega in the spring as early as possible was an effective method of producing much higher yields with lower weed pressure.”

Weed control in new galega stands: LUARS
The LUARS experiment not only compared different planting times but also assessed the effectiveness of various herbicides.
Sahota explains that no herbicides are currently registered for use in galega in Canada, so he wanted to test several possibilities to see which ones would work well enough in galega to make it worthwhile to pursue registration. 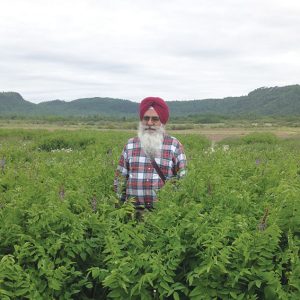 Sahota in 2016 in a galega stand seeded at LUARS in 2011.
Photo courtesy of Tarlok Sahota/LUARS.

All the plots were disked in the previous fall. Alfalfa was seeded at 15 kg/ha as a check plot, and all the galega plots were seeded at 30 kg/ha. The treatments are listed in the table.

In the establishment year, the best weed control was provided by treatments 4 (seeded after barley), 5 (seeded in mid-July) and 9 (Basagran Forte, post-emergence), although 9 also caused some crop damage.

Sahota is following up on the possibility of registration for Rival, Basagran Forte and Pursuit in galega.

Sahota’s longer-term experience with galega is very positive. On average, LUARS’s 2011-seeded galega stand has outperformed alfalfa in both yield and protein content.

“I would encourage farmers to try galega on a small scale and see how it goes,” he says. “As long as you take care of the weeds in the establishment year, galega is a good crop. It has a lot of foliage and a high protein content. It has softer stems than alfalfa, making it more palatable. It starts growing earlier in the spring than alfalfa, which is how it is able to smother dandelions. Galega also has a wider window for harvesting; galega harvesting can start earlier than alfalfa, and if you need to delay harvest of galega, the forage quality doesn’t decline as quickly after the first bloom.”

If you are thinking of trying galega, both Parr and Sahota strongly recommend growing it as a pure stand, not as a mix, and planting it in a field with relatively low weed pressure. Sahota adds, “Galega is best seeded after cereal crops where the weed pressure will be less, and definitely do not plant it in fields with herbicide-resistant weeds.”