With increasing frequency and vehemence, fingers are being pointed at farmers over the issue of nutrient runoff into key bodies of water, like Lake Ontario and Lake Erie.

Until now, the gap between agricultural producers and those who blame those producers for eutrophication has seemed unbridgeable. Farmers argue they have a right to earn a livelihood from their land. Environmentalists – and, increasingly, politicians and laypeople too – argue water quality and the good of all must override farmers’ land use needs. Now, plant breeders are working on developing new perennial cereal crops that may meet the requirements of both sides.

“There are limited options for a cash crop grower who is concerned about nutrient runoff into watersheds. They might think about planting something like grass for a considerable distance around a water body, but that might mean that they give up a considerable amount of revenue,” says Jamie Larsen, a researcher with Agriculture and Agri-Food Canada in Lethbridge, Alta., and lead plant breeder on a new perennial rye study. “In the future, an option would be to plant a perennial grain crop that would [be] productive, but also provide significant environmental benefits.”

“Perennial grains require a change in mentality about how cropping is done. They’re different, no doubt about it. But times have changed. Perennial grains offer the potential for economic benefit, while also considering sustainability priorities,” adds Doug Cattani, a researcher at the University of Manitoba who is currently developing a perennial wheatgrass to suit Canadian growing conditions.

Though cereal grains have been treated as annuals for decades, many cereals are willing to function as perennials if given the chance. Rye, for example, is a robust and surprisingly hard to kill plant. Each plant in some varieties of rye can produce productively for three or four years. Other cereals are even longer-lived: Cattani says intermediate wheatgrass can live at least eight to 10 years, and may produce grain productively beyond the four years he has tested them for.

In addition to producing a harvestable cereal crop each year, perennial cereals also offer grazeable forage each fall, erosion control and the absence of yearly seeding-time pressure on the producer. Most importantly for those concerned about healthy water systems, perennial cereals have the potential to slow nutrient runoff in a host of ways.

“If you can have something in the ground all year round and actively growing every day of the growing season, you’ll have much less nutrient runoff than if you plant a seed in spring and pull that plant out of the ground 95 or 100 days later,” Cattani says.

First and most obviously, perennial plants capture and remove nutrients from the soil each and every day of their growing season.

In addition to the number of days they are able to capture nutrients each year, perennials also easily surpass annuals regarding the depth of soil from which they can capture nutrients and the total volume of nutrient capture. At between two and three metres in length, perennial cereal roots reach twice as deeply into the soil as do annual cereals. The longer, denser root biomass serves to capture nutrients more efficiently and more deeply in the soil, decreasing nutrient movement through the soil and limiting the need for additional fertilizer application.

Actively growing perennial cereals also help to use up water that would otherwise sit on the land in early spring, decreasing the likelihood of leaching.

Perennials excel on the disease resistance front too. The fact that they are long-lived typically means they have accrued a superior disease resistance profile that allows them to survive, resulting in fewer fungicide requirements.

Larsen’s perennial rye study has barely begun, but already he is hopeful perennials may have a real place in tomorrow’s agricultural reality.

“The more I work with perennial grains, the more applications I see for them, from the perspective of limiting nutrient runoff to conserving soil, to saving producers input dollars and planting time. This is the next step in cropping efficiency,” he says.

For all of perennial cereals’ benefits, one fairly serious drawback remains: because a perennial plant must put some energy into its root reserves, it cannot yield as much as its annual cousin. Currently, perennial cereal crop yields are significantly lower than annual cereal crops. Cattani’s intermediate wheatgrass, for example, yields between 10 and 20 bushels per acre.
That said, breeders are already making significant leaps forward in perennials’ yield potential. And, because there is increasing market demand for more sustainable agriculture, farmers might capture better prices for perennial grains compared to conventional annual grains.

“Perennial grains are not going to be as productive as annual cereals. That’s the truth. But it could be a high-value grain that some companies might be willing to pay a little extra for. That’s the potential,” Larsen says.

“There is certainly interest in perennial grains. Quite a number of producers would probably be willing to grow a perennial cereal if we could provide them with a variety that is adapted to their growth area, that offers good yield potential for at least three or four years, and that has a good agronomic package ready when we release the variety,” Cattani says.

“I’m excited. I see the potential,” he says. “But having said that, I think we’re 10 to 15 years away from releasing an intermediate wheatgrass for our regions. We can’t say ‘plant it’ when we don’t yet know how best to grow it. I think perennial cereals are an area of research you’ll see explored relatively significantly over the next 10 years.

For naysayers who are pessimistic about the potential for a lower-yield crop to find success in Canada, Cattani says: “Before we had canola as a major human-use oil, a lot of people said it had too many issues. But canola is a good example of what is possible when we apply resources to a potential crop to help solve key issues.

“What makes the concept of perennial cereals interesting is – even as it is now – it is a much more productive option than simply planting a forage grass, and it’s really sustainable. It has the potential to make a lot of people with conflicting priorities happy.” 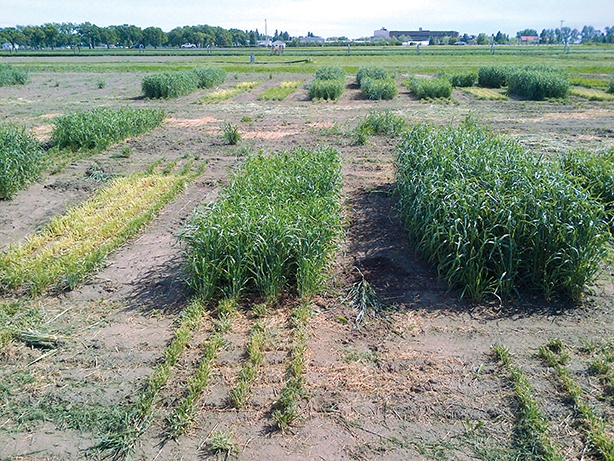