Pedigreed wheat seed is in hot demand this year, but there’s simply not enough of it to go around. While fingers have pointed at Fusarium graminearum as the culprit behind the shortage, the answer is a little more faceted than that.

“Last year there were more canola acres so the cereal acres were displaced by canola,” explains Sarah Foster, senior analyst at 20/20 Seed Labs Inc. “And this past year, we had a lot of unusual weather conditions – a lot of humidity and warm weather at the wrong time.”

The warm weather fed intense weather, and there were several devastating hailstorms in the southern growing areas when last year’s wheat was flowering. The warmer growing season also promoted perfect conditions for pathogens such as Fusarium graminearum to flourish and spread.

Fusarium graminearum is a species of fungus that causes fusarium head blight (FHB) in wheat, barley, oats and corn. There are other pathogens in the Fusarium genus, and four species can be found in Canada, but F. graminearum is considered the most damaging. It is the most abundant, affects yield and grade to a greater degree, and produces toxins dangerous to human and animal health. The 2012 growing season saw unprecedented growth of the pathogen, but Foster says the origin of its spread in Alberta may have been a surprise to some.

“We’re seeing Fusarium not necessarily spreading up from southern Alberta as was always thought – most of the Fusarium has been concentrated in those irrigated areas. But we’re seeing more coming across from Saskatchewan,” she says. “There’s been some odd southeasterly winds and they think that because of the higher spore load in Saskatchewan, that’s how it’s worked its away across from the border all the way to Westlock and St. Albert.”

To many producers, FHB was an unexpected – and unwelcome – visitor. “They’re surprised to find their areas are affected and they’re not alone,” notes Foster, who adds that most of the infections were low-level, but Alberta’s policy on Fusarium is zero tolerance, which serves to exacerbate the seed situation. “That’s driving the wheat shortage as well because they’re not allowed to plant it or sell it. People are looking more for CPS (Canada Prairie Spring) wheat this year and they were sold out of CPS before Christmas.” Foster also says interest in CPS is exceeding that in hard red wheat this year.

In addition to the causative factors contributing to Fusarium growth, low yields in 2012 further reduced the seed supply.

“Yields were low. A lot of that was because we had a very cold, wet spring, and it never really dried up the entire time, so we were actually too wet in some areas.”

And where the rules of nature end, the laws of supply and demand take over. Low yields drove wheat prices higher, and higher prices drove producer demand for seed higher. “Prices are really good. Last year canola prices were good and canola prices are still strong, but this year wheat prices are good because there is a shortage,” says Foster.

Although the shortage of pedigreed wheat seed is pronounced, she doesn’t believe it came as a surprise to many producers. “It’s been fairly common knowledge that people have been trying to source new stock. If they can’t get what they want, they’re obviously going to plant an alternative. I think there will be more canola – although canola is pretty well sold out too from what I hear.”

Of course, F. graminearum wasn’t the only pathogenic threat last year – root rot and leaf blotch were also common, thanks to the warm and wet conditions. Warmer than average nights last summer added fuel to the fire – F. graminearum releases spores overnight, and the atypical warmth facilitated the spread.

“Again, it’s driven by the environment and most of these can be treated with a good seed treatment and, weather permitting, you probably won’t see these levels again for a couple of years,” says Foster.

In addition to seed treatments, increasing seeding rates and using a fungicide for FHB are tools producers will want to consider this year. Another factor contributing to pathogen growth is zero tillage, because the method leaves a lot of crop residue in the soil. “That actually hosts some of these pathogens that like these cereals as hosts,” notes Foster. “I’m not telling people to get out of zero-till – there are huge benefits to it – but that’s one of the things factoring into this and I don’t think they realize that.”

While the situation might seem grim, Foster says, it may not be quite as bad as it appears. “The other thing that’s really interesting with Fusarium graminearum last year is that it was actually a late-season infection, so the spores are actually on the seed surface instead of being systemic. That shows that it blew in much later, after flowering.” 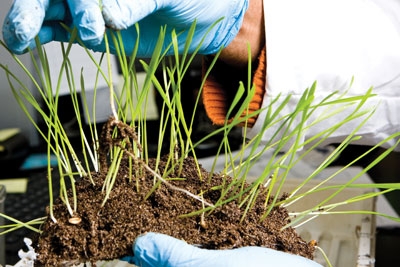