A pea leaf weevil by any other name would still prefer fababean as its primary host crop. 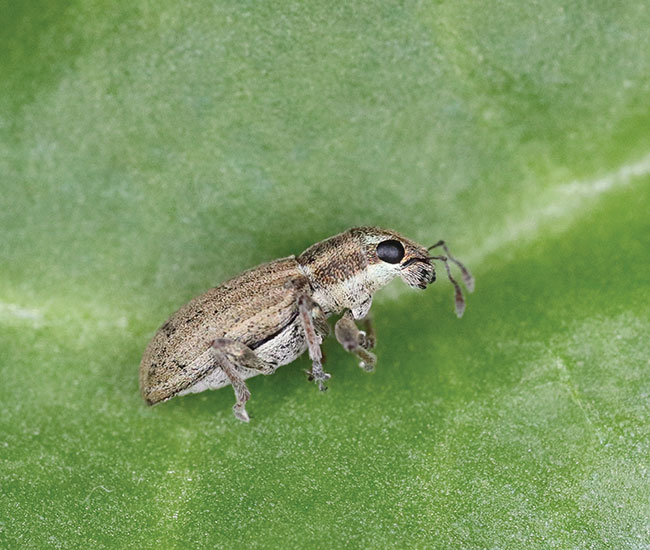 The name “pea leaf weevil” drums up thoughts of an insect gnawing away in a crop of field peas. But as many fababean growers have found out in recent years, this weevil doesn’t stop in its tracks at the pea field borders. Finally, some much-needed research on pea leaf weevil in fababean, including the first-ever economic threshold, is coming to conclusion through the work of Asha Wijerathna, a PhD candidate in the department of biological sciences at the University of Alberta.

“Pea and fababean are becoming increasingly popular in Alberta, with more area of growth every year. Along with this increase in host plant acreage, pea leaf weevil populations have been expanding their range to the northern and eastern regions of Alberta, causing damage to these crops. While research on this insect exists for field pea, very little was known about its effect on fababean on the Prairies. Therefore, there was a need to understand the impact of pea leaf weevil on fababean in order to mitigate potential damage,” says Wijerathna.

Under the supervision of Héctor Cárcamo, research scientist at Agriculture and Agri-Food Canada in Lethbridge, and Maya Evenden, professor in the Biological Sciences Department at the University of Alberta in Edmonton, Wijerathna conducted eight experiments in Alberta from 2016 to 2018, including a focus on the host preference, yield impact and management of pea leaf weevil in fababean.

Fababeans: Where spring adults prefer to arrive and larvae happily thrive
Pea leaf weevil adults were found to have different host preferences during different times in their life cycle. Adults in the fall, when they are reproductively inactive, did not have a preference in host crops when given the choice between field pea and fababean. However, reproductively active adults in the spring preferentially chose fababean over field pea.

Wijerathna explains: “Fababean produces more nodules compared to field pea. Since the larvae feed on nodules, female weevils may choose fababean over field pea to support larval development. We still don’t know how adults are able to discriminate between hosts, but adults do respond to both fababean and field pea host volatile compounds so perhaps adults use volatile composition to choose between two host plants.”

Interestingly, when the spring adult weevils fed on alfalfa prior to being introduced to fababean and field pea, the weevils stopped exhibiting a preference for fababean. “Because this previous experience of feeding on alfalfa may have affected weevil host acceptance and preference, it’s possible that fababean and alfalfa may be used as potential trap crops in managing pea leaf weevil,” Wijerathna adds.

Wijerathna also tested adult feeding and larval development on seven different legume species, all inoculated with their corresponding inoculant strain: field pea, fababean, alfalfa, lentil, chickpea, soybean and lupin. The results showed that adults will feed on all of the host plants, except for chickpea, and feeding is very minimal on lentil. Larvae were found to develop only on field pea and fababean, and to a much lesser extent, soybean.

Wijerathna clarifies that there is still a lot to be understood when it comes to larval development on host species. “We know that larvae feed on Rhizobium leguminosarum biovar viceae, associated with root nodules of pea and fababean. Yet, lentil does not support larval development despite having this same Rhizobium, and adults do not feed much on lentil. The leaf and nodule characteristics may have something to do with this, but more research is required to understand why. We also do not know if other Rhizobium strains support larval development. Adult weevils will feed to a lesser extent on soybeans, which use a Bradyrhizobium japonicum inoculant strain, and we did find some, although very few, larvae feeding on these nodules. Again, these findings need further research,” she says.

Out of the two primary host crops, field pea and fababean, higher numbers of larvae were able to develop on fababean. “Both hosts support more larvae when infestation occurred at the later seedling stage (fifth unfolded leaf stage) compared to the earlier infestation stage (third unfolded leaf stage) because the root systems of the crops are larger at that time, and more nodules mean more food available for the larval population. Fababean produces more nodules compared to field pea, which is the reason for higher larval capacity in fababean,” Wijerathna explains. 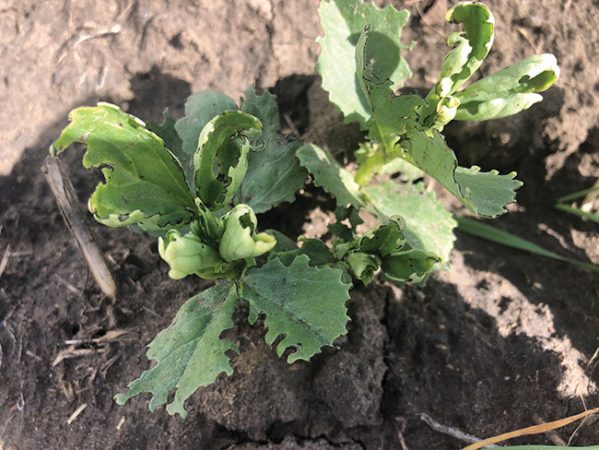 New economic threshold determined, although foliar insecticide ineffective for control
Similar to field pea, Wijerathna found that foliar feeding by adults on fababean plants can potentially decrease yield, but it is the feeding damage by larvae on the root nodules that causes the more significant yield reduction.

Currently, few management options exist for controlling pea leaf weevil in fababean. One option is to attempt to use a foliar insecticide (lambda-cyhalothrin, in this study) to control adult weevils before egg-laying takes place. The results showed that foliar insecticide was ineffective in protecting fababean yield and therefore is not a recommended strategy for pea leaf weevil management. These conclusions are consistent with multiple research studies and field-scale observations conducted in western Canada on pea leaf weevil in field pea.

“The effectiveness of foliar insecticide could vary with many factors such as peak flight time of the weevil to the fields and weather conditions. Therefore, any attempt at spraying should be done with a prior knowledge of weevil density and this is where monitoring for adult damage and using the economic threshold is important. Another way to make use of this economic threshold is for evaluating how effective your insecticide seed treatment is at protecting seedlings from adult damage,” Wijerathna suggests.

Cárcamo agrees. “I think the best we can do is say that this is really only a nominal action threshold because we are using the prices of insecticide that we know are not protecting yield. But this is all we have to give producers an idea of what level of damage is serious enough to reduce yield, and for them to think about ways to mitigate the risk damage in the future – basically, use seed treatments or grow a crop that is not susceptible, such as lentils,” he says.