For many growers affected by the DON outbreak that afflicted Ontario corn crops last year, the losses will likely be out of pocket, according to the Grain Farmers of Ontario. With great corn yields in the province overall, what are the next steps for corn growers that experienced a different looking year? 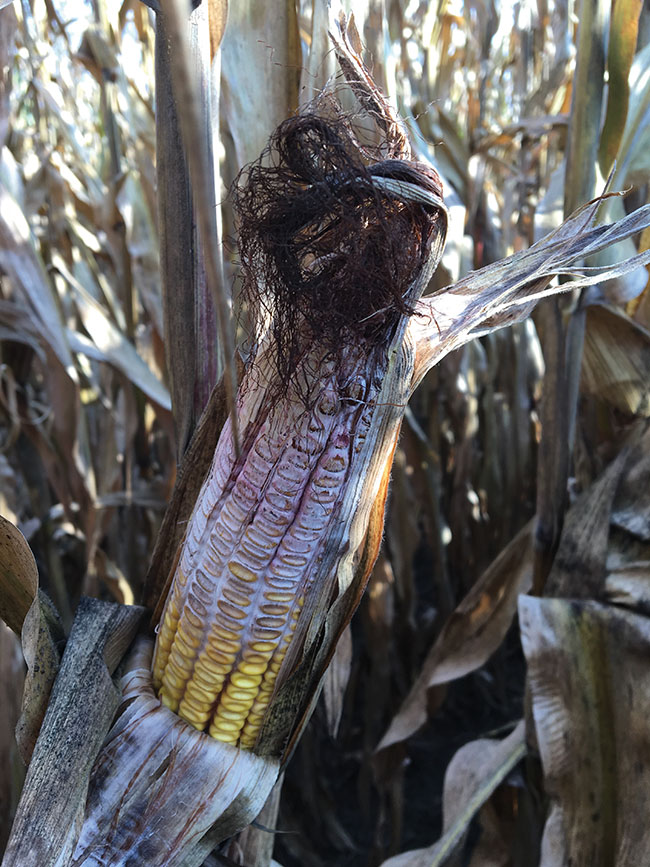 Affected growers are eligible for a production or salvage benefit. Photo courtesy of Agricorp.

The mould infestation that swept through field corn crops in many parts of southwest Ontario in 2018 could end up costing growers hundreds of millions of dollars, according to the Grain Farmers of Ontario (GFO).

The losses are the result of corn infected with Gibberella ear rot that produces a mycotoxin called deoxynivalenol, also known as DON. High DON levels limit the end-uses possible for grain corn. Many growers had to accept steep discounts on their corn at grain elevators because of high DON levels, and in some cases, corn lots were rejected altogether.

“We’re estimating losses could be up to $200 million for those farmers involved, and that’s because of the significant discounts they’ve had to take at time of delivery,” says Barry Senft, the CEO of GFO.

Senft maintains some of the losses will be addressed through a salvage benefit that Agricorp insurance offers, “but it’ll be a small part of what that $200 million represents.”

Agricorp offers a production insurance program to protect growers against yield losses. Because the DON outbreak affected crop quality but had little impact on yield in many cases, Senft doesn’t anticipate that many corn producers will benefit from this kind of coverage. As a result, he says, losses will likely be out of pocket for most growers.

Grain producers have been reporting their final yields to Agricorp. Debbie Brander, Agricorp’s manager of product management, says approximately 3,000 Ontario growers contacted the agency with concerns about DON levels in their corn, and of these, about 500 were worried their crops may be unmarketable.

According to Brander, there were pockets within province that were hit much harder than others by DON. She says there was a lot of variability within farms, and even within individual fields.

Brander says corn growers with high DON levels in their crop can call Agricorp to discuss how their coverage works and whether they are eligible for a production or a salvage benefit. “The salvage benefit is intended to cover the extraordinary costs required to harvest, market, test and store damaged crops, such as crop that’s above five parts per million DON,” she says.

Brander adds, in many instances, afflicted corn crops were accompanied by high yields, meaning some DON-related claims likely won’t result in a production claim; however, some will qualify for the salvage benefit instead.

She notes that there were pockets of farmland negatively affected by weather over the summer that reported lower yields and could qualify for a production claim as a result.

“We are working with customers on an ongoing case by case basis, because every situation is different,” Brander says.

Senft points out that under the Agricorp program, growers with DON corn can still qualify for production insurance coverage if they decide not to market their crops. However, that decision needs to be weighed carefully, because guaranteed yields under production insurance are based on a revolving 10-year average. An unmarketable crop means a zero yield, which will lower base coverages for guaranteed yield for years to come.

Agricorp explains there is a buffering mechanism under its Production Insurance program that lowers the impact of extreme yields on a customer’s 10-year average. Buffering helps producers maintain a stable average despite having one bad year.

“Growers need to sit down with the crop adjustor and really determine what they want to do, and for each individual it’ll be a little different,” Senft says. “Even if you had higher vomitoxin in your crop and you can find a decent market for it, you might be better off marketing that higher yield corn and not make a claim.

“We’ve talked to a number of producers who are having a difficult time deciding which way to go,” he adds. “But ultimately it’s a decision they’ve got to make.”

“We will follow up with each one to ensure they understand their coverage and their next steps,” she says. “Once they call us, we will visit or contact them within two days.”

Barry Senft says the Grain Farmers of Ontario has been meeting with similar groups across the country to discuss how recent government cutbacks have eroded the safety net system for Canada’s farmers and what can be done about it.

“At the federal/provincial [agricultural] ministers meeting last July, the ministers gave us the go ahead to start reviewing the program and that’s what we’re basically undertaking now,” Senft says. “But for these producers affected by DON, it’s going to be too late.”

According to Senft, GFO has approached both the federal and provincial governments seeking financial help for Ontario grain growers facing significant losses due to DON.

“We’ve had discussions . . . about the need for some compensation to these producers because basically they’re not even covering the costs of production as far as their corn crop goes. Corn is an expensive crop to grow, and they’re going to be short,” Senft says.

“These farmers contribute significantly to the economy of Ontario, and so while we understand that [governments] have to watch their costs, we feel that this is well worth their while to be making an expenditure like this.”

In November, the Ontario and federal governments announced a new program separate from crop insurance that’s aimed at helping farmers experiencing high levels of DON. It includes some funding to help with a portion of their DON-related expenses such as testing, as well as financial support for new projects addressing challenges in the grain sector value chain, such as finding ways to best process or market corn impacted by DON.