Techniques for organic potato production offer possibilities for all growers. 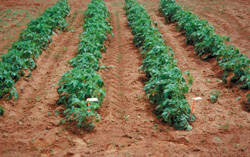 Without doubt there is merit to most methods of crop production, the choice
remains for growers to adapt any method to their own operation and make it economically
viable. Researchers at Agriculture and Agri-Food Canada in Charlottetown are
examining some of the weed control options of organic production to see if they
are adaptable to conventional agriculture. The goal of this research is to determine
ways to reduce herbicide use, particularly if there are cost savings involved.

"We looked at the standard procedures organic growers use to grow potatoes
without using herbicide products," explains Dr. Jerry Ivany, the lead scientist
on the project. "It's a given that in order to maximize yield, all growers
need weed control. We looked at the options available and the effort needed
to remove weeds successfully using a variety of methods."

The research first documented when weeds emerge and when they cause the most
problem to the crop. Ivany says that weeds come up about one week after planting
potatoes, which is earlier than potato emergence. He says potatoes emerge, on
average, about one and a half to two weeks after planting. If growers can get
about three to four weeks weed-free after potato emergence, the potato plant
will be strong enough to compete with later weeds and the crop will thrive competitively
through to harvest.

"In organic production, the most common weed control solution is through
cultivation," Ivany says. "Organic producers cultivate two or three
times following planting to control weeds and then hill the crop after weed
control is done. With this method, the timing is critical because annual weeds
have to be controlled at the cotyledon stage. Unfortunately, this operation
can be affected by rainy conditions that prevent cultivation. This option doesn't
work well with conventional production that uses hill-shapers."

Annual and perennial weeds that get the upper hand in a potato crop cause huge
losses. If perennial quackgrass is the culprit, yield can be reduced by 30 percent
if the weed is not controlled during the first three weeks after potato emergence.
Broadleaf weeds can reduce yield between 10 and 15 percent if they are not controlled
during the same period. The level of loss will depend on weed density and the
specific weed that is present. Ivany is evaluating using the Weedcast program
to predict emergence and then growers will have some useful information to determine
their control method.

Using Weedcast, the researchers timed their cultivation for weed control when
the program predicted 15 percent emergence of lamb's quarters. Table 1 shows
the results of these tests indicating that cultivation at 15 percent emergence
of the weed offered effective control and showed good yield results. The information
available in Weedcast allows growers to make decisions on cultivation depending
on their most common specific weed.

Another method of weed control employed by organic growers is the use of flamers
to burn off the weeds. This proved to be a highly effective weed control method
but one that requires precise timing to ensure there is no crop damage. "We
went down the potato row with the flamer set to treat a 25 to 30 centimetre
wide band directly on top of the potato row," Ivany explains. "We
then cultivated between the rows and got excellent control. Our control of annual
broadleaf weeds was comparable to a herbicide application."

Again, the caution is the timing of this method because, if potatoes have emerged
when using a flamer, yield will be affected. Ivany reports that two applications
using the flamer after the potatoes emerged reduced yield by 10 to 15 percent.

In 2004, Ivany and his colleagues took an initial look at using acetic acid,
the active ingredient in vinegar, for weed control. This product is not registered
in Canada for any crop application. Using spray applications of 10, 20 and 30
percent acetic acid, Ivany found the best weed burnoff occurred with the 20
percent rate. "This was the first year we tried this product," Ivany
says, "and we are learning as we go." He plans to work with acetic
acid further in 2005 examining concentration and spray volume needed.

All of these methods have some merit for all potato growers, but they also
have to have an economic benefit. Flamer technology can be expensive for large
commercial growers but there may be some economic and environmental benefits
if a reasonable application of the technology can be found. "Using a flamer
in a band over the potato row reduced the cost of propane used substantially,"
Ivany explains. "A grower would still need to cultivate between the rows."

As alternative weed control methods come to Ivany's attention, he evaluates
their effectiveness. The one thing Ivany has proved in all the methods he examined
is that weed control is most effective at the cotyledon stage of weeds and potatoes
will recover from early foliar injury due to any of these weed control methods
as long as the weed competition is effectively removed. He suggests combining
methods to get the best results.

Weed control is an important and on-going challenge for potato producers and
Ivany's research with organic methods offers some options that can work in any
operation. -30-