Spraying chemicals has expanded far beyond in-crop herbicides to include fungicides, pre-harvest, and other late season applications in many fields. Challenges arise as growers transition to spraying at different times of the year and into different crops, canopy heights and densities. 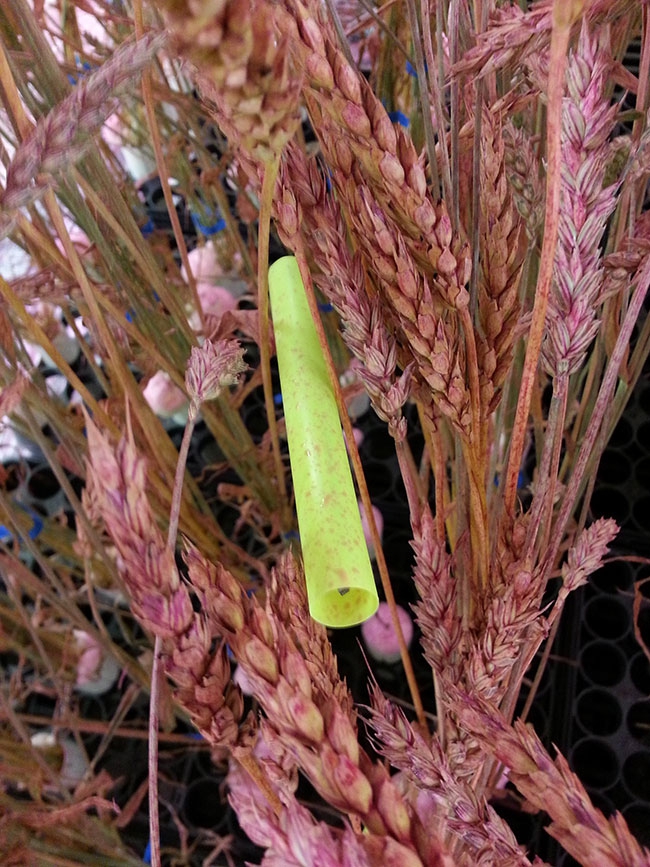 A recent research project led by Tom Wolf of Agrimetrix Research and Training is trying to answer questions about how to effectively and efficiently spray into different crop canopies. Wolf notes a large number of crops are new to late season spray applications, raising questions that need answering. The three-year project was initiated in Saskatchewan in 2014 in collaboration with Randy Kutcher at the University of Saskatchewan and Bruce Gossen of Agriculture and Agri-Food Canada. It includes both controlled lab and field spray trials.

“The main project component is the laboratory trials started in 2014, where we put sprays through a track sprayer and trace them through a crop canopy to determine where the spray goes and how we could affect that,” Wolf says. The main variables include water volume, travel speed, boom height, nozzle type, nozzle angle and spray pressure – all factors applicators would have control over. “We conducted much of the lab work during the winter months and used both a mature wheat crop canopy transplanted from the field and a simulated generic broadleaf crop canopy similar to a fairly tall canola or dense field pea crop for testing. The lab work is mostly completed, with a few final details to finish.”

Field trials were included to validate the lab results. The first field season was planned for 2015, but with the very dry growing conditions later in the season, project co-operators opted against late season applications. In 2016, four field-scale trials were successfully completed and the data is now being analyzed. Part of the project included an evaluation and incidence rating of cereal diseases, including Fusarium head blight and leaf spot complex, which are being completed by Kutcher’s research lab.

“Although we don’t have final results to share yet, there are some preliminary observations we can make,” Wolf says. “As always, the news is both good and bad. The bad news is there is no silver bullet to getting through a dense canopy – it is simply difficult. There are no magic nozzles or travel speeds that will solve the problem. However, the good news is that we found some ways in which canopy placement can be improved, and we also learned a lot more about twin fan nozzles, which are becoming more common for late season sprays.”

Although Wolf notes the two most important factors may be somewhat unpopular, they are necessary and are the best strategies available. “The single most important variable we found was water volume, which is not necessarily new, but our new project data provides affirmation of previous work. The best way to get more spray through the canopy is to increase the amount of water applied with it. Go with higher water volumes and slower travel speeds to maximize canopy penetration. Another interesting observation has to do with double or twin fan nozzles. Although more applicators are moving these types of sprays, we found that the angling of the spray is really only effective when boom heights are relatively low, less than 30 inches above the canopy. The lower the better, but we realize that is difficult with high clearance spraying applications.”

The project showed boom heights tend to be a bit too high, particularly for fungicide applications for diseases like Fusarium head blight. Results also show the most effective applications using twin nozzles were done at lower boom heights. “Boom heights of 20 inches and lower work the best. However, 20 inches is likely the most practical lower boom limit,” Wolf says. “We didn’t see a loss of deposition with higher booms for leaf diseases, just for head diseases like Fusarium head blight.” Although 25 to 35 inch boom heights are not uncommon, the challenge lies in moving over rough terrain during the spray operation. Even with boom levellers, the boom height can easily vary by as much as 10 to 20 inches or more as you move across the boom width.

Assessing spray deposition into crop canopies in the lab.

“The key message is that farmers and applicators need to make an assessment of the kind of crop canopy they have and where the spray needs to go in the canopy,” Wolf says. “Not all sprays have to go deep into the canopy, but some do, so making the proper assessment is important.”

With sclerotinia in canola, a spray application only has to penetrate the top third of the canopy, where most of the canola flowers and petals are located. Lentils, on the other hand, tend to be a relatively short crop and most of the fungicide must penetrate deep into the lower canopy. This can be difficult to achieve with a very closed canopy. For a sclerotinia application, a traditional 10 gallons per acre of water (or a bit more) may be adequate, but for a closed lentil canopy, going to 15, 20 or even 30 gallons per acre of water may be necessary to penetrate the canopy adequately.

Although there are several challenges, maximizing the effectiveness and performance of the spray application optimizes control and protects yield. A spray operation is costly and doing it right is important. “The quality control onus is on the farmer, so if you are hiring a custom applicator, ask some questions,” Wolf says. “Particularly with fungicides, you want to know if they will be there on time. The window for application can be very tight, so tomorrow may be okay but the day after may be too late. Ask what water volume they plan to use. If it’s lower than you would like, ask how much it will cost to put on more water.” He says the cost is often quite reasonable.

Wolf emphasizes that the trends are for farmers to cover all of their acres with various chemical applications four or five times per season. With all sorts of pressure from the weather forecast and other tasks, it’s tempting to rush it, but a lot rides on getting the proper results. It’s important to do the job right and on time.