Phosphorus is the most likely nutrient to be limiting field pea productivity and can provide sizeable yield benefits when applied as fertilizer. 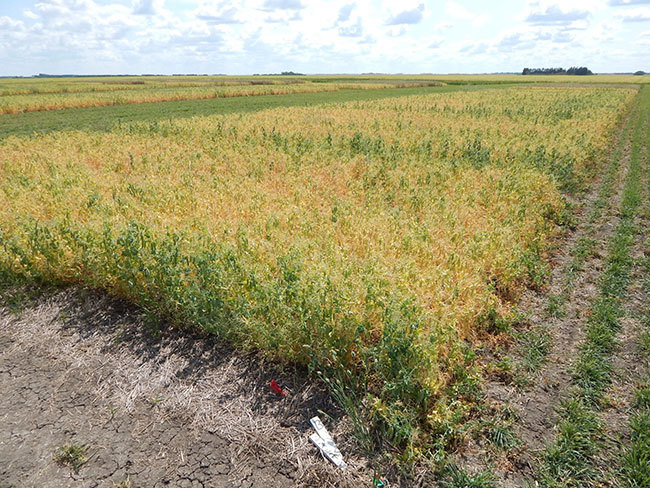 In 2019, a comprehensive field pea fertility study was initiated at multiple Saskatchewan locations by Agri-ARM and Saskatchewan Pulse Growers agronomists. The objectives were to evaluate the yield and protein response of yellow field pea to various rates and combinations of nitrogen (N), phosphorus (P) and sulphur (S) fertilizer across a range of Saskatchewan environments. The six study sites were located near Swift Current, Outlook, Scott, Indian Head, Yorkton and Melfort. Seed yield and seed protein concentrations were evaluated.

“For field peas, P is the main nutrient that growers need to be concerned about for fertilizer management. Generally, N fertilization in field pea production is not recommended unless soil residual levels are extremely low, and responses to S appear to be rare,” explains Chris Holzapfel, research manager at the Indian Head Agricultural Research Foundation (IHARF). “Peas, like most other legumes, can convert atmospheric N2 to available forms utilized by the crop through the process of N fixation, with maximum benefits generally achieved when mineral N (soil plus fertilizer) levels are low. However, we were interested in evaluating various fertilizer application treatments to test the yield and protein responses, and therefore included varying P and S rates in addition to several N fertilization strategies. We also included an unfertilized control and an ultra-high fertility treatment to represent those two extremes.”

For the study, the source of P was monoammonium phosphate (11-52-0) and S sources were ammonium sulphate (21-0-0-24). The N source for all of the treatments was urea (46-0-0), except for one treatment where polymer coated urea (ESN; 44-0-0) was used. Seeding equipment varied across locations, but all sites utilized no-till drills with side-band capabilities and the field peas were always seeded directly into cereal stubble. All fertilizer was side-banded with the exception of one treatment that included an additional in-crop broadcast urea application during the late vegetative crop stages. All sites used the same seed source and variety CDC Spectrum, with target seeding rates of 100 viable seeds per square metre, adjusted for seed size and percent germination. All treatments received the full, label-recommended rate of granular inoculant.

“Generally, the results from the 2019 trials are more or less what we expected, taking into consideration that specific responses and requirements can vary across the study sites,” Holzapfel says. “The observed fertilizer responses were largely consistent with past research and current recommendations for western Canada. Overall, the results showed that P had the largest and most consistent impact on yield, which is not surprising as the selected sites were generally low in P. The lowest yields were in the unfertilized control, while the highest yields were achieved with a balanced but not excessive fertility package of 17-40-0-10 kg N-P2O5-K2O-S per hectare (/ha) as side-banded monoammonium phosphate and ammonium sulfate.”

The responses to P fertilization varied across locations and environments, however yields were increased by up to 12 per cent when averaged across all six sites. The most responsive sites showed yield increases with P fertilization ranging from 11 to 31 per cent. Statistically, yields did not differ significantly amongst any of the fertilized treatments where a minimum of 20 kg P2O5/ha was applied. As well, yield increases beyond the 20 kg P2O5/ha rate were never statistically significant, and under most conditions it is unlikely that rates exceeding approximately 40 kg P2O5/ha would be justified. An important exception could be when the fertility objective is for long-term building of residual P levels. A balanced, but not excessive P fertility package probably resulted in healthier plants and roots, which could have indirectly resulted in better fixation and accumulation of N and frequently increased yield. 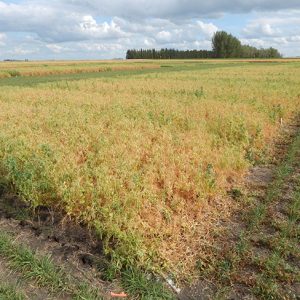 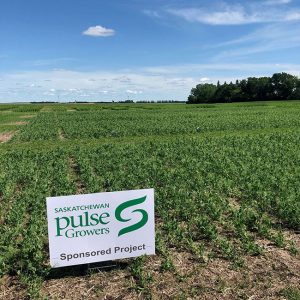 “We also saw a significant location and fertilizer interaction with the protein response, similar to seed yield, indicating that the protein response to fertilizer varied with the environment,” Holzapfel adds. “The study showed that P had the biggest effect on protein, and there was a significant overall linear increase in protein with increasing P rate; however, these responses were small, inconsistent, and could be due in part to the elevated N levels at the highest P rates. The results also showed that regardless of formulation, there was no benefit to additional N for either yield or protein, beyond what is supplied with modest rates of P and S fertilizers. This study did not provide any evidence that an in-crop application of N, or slow release N products, are likely to benefit an otherwise healthy and well-nodulated pea crop with respect to either yield or protein. Any responses to N that did occur were small and/or negative. Negative protein responses to N fertilization are at least as probable as positive responses.”

When averaged across locations, S responses were not significant, however S deficiencies can potentially occur on a site-specific basis. For example, a positive yield response to S rate did occur at Yorkton even though soil test levels were high. It is unlikely that S deficiency has been an important yield limiting factor for many field pea producers in Saskatchewan, however if deficiencies have been observed in the past for either field peas or other crops, applying a small amount of S may be beneficial.

“Overall, the study results support the use of soil tests and suggest that of the major nutrients, P is the most likely to be limiting field pea productivity and can provide sizeable yield benefits when applied as fertilizer,” Holzapfel says. “The fertilizer responses in the study were largely consistent with past research and current recommendations for Western Canada. Soil testing can help predict what the likelihood of response to individual nutrients is and also help growers set long-term fertility goals, whether that is to build, maintain or deplete residual P levels. Although growers with a strong history of peas or lentils in their rotation may see reduced benefits to inoculation, I still always recommend inoculating since die-backs of native rhizobia can occur, particularly in areas affected by flooding, drought, or disease. Good nodulation is so critical for a healthy, high-yielding pea crop that it is not worth risking a failure by failing to inoculate.”

These exact trials were repeated in 2020 at all locations except Outlook, and Holzapfel says the team will be re-analyzing the data and providing an updated report later this winter.