The researchers have already completed five years of intensive data collection, from 2008 to 2013, at sites across Alberta. And they’ve learned a lot from their preliminary analysis of the data. Now they are working on an in-depth analysis so they can update provincial nitrogen fertilizer recommendations and enhance AFFIRM, a fertilizer decision support tool.

“It’s been a long time since we have done this kind of research in the province. But as we get new crops, new varieties, new input products, new types of equipment, there is a need to re-visit or re-do these studies to make sure our fertilizer recommendations are up to date,” explains Len Kryzanowski of Alberta Agriculture and Rural Development (AARD). He is leading the study, which is a joint effort of AARD, Agriculture and Agri-Food Canada, Agrium and the Alberta Crop Industry Development Fund.

AFFIRM – Alberta Farm Fertilizer Information and Recommendation Manager – is available on the AARD website. It is mainly based on Alberta conditions so it’s targeted to Alberta users, but people in Manitoba and Saskatchewan have downloaded AFFIRM too.

“AFFIRM is popular with producers who want to identify economically appropriate rates of fertilizer application,” says Kryzanowski. “The current version came out in 2005. We want to update it with our research results and bring it up to a 4R Nutrient Stewardship level, to take into account some of the placement and timing aspects of fertilizer management.”

He explains: “The 4R Nutrient Stewardship – ‘Right Source @ Right Rate, Right Time, Right Place’ – has become the industry motto to promote responsible, sustainable fertilizer use.” The Canadian Fertilizer Institute is leading a national initiative to help farmers use the 4R approach to increase their production and profitability, while enhancing environmental protection and improving sustainability.

The Alberta study was initially prompted by the need for more information on Environmentally Smart Nitrogen (ESN) under Alberta conditions. ESN consists of coated urea granules. Moisture can move through the coating and dissolve the urea. As the soil warms, the dissolved urea moves out faster through the coating and into the soil. Since soil moisture and rising soil temperatures also promote crop growth, ESN could potentially improve yields by better synchronizing nitrogen availability with the crop’s need, while also reducing nitrogen loss to the environment.

“Nitrogen losses are obviously going to impact crop yield, economics and productivity,” says Kryzanowski. “But nitrogen losses can also be quite significant from an environmental perspective.”

Fertilizer nitrogen can be lost from a field by runoff, leaching and gaseous losses. Runoff and leaching losses can harm water quality. One of the gaseous losses is nitrous oxide, a potent greenhouse gas. Kryzanowski says, “Fertilizer management has come under a microscope as a source of nitrous oxide emissions.”

He notes that nitrogen losses could also have value chain implications. For example, Walmart recently stated that it would like farmers in its food supply chains to optimize their fertilizer use, yield and productivity, including minimizing fertilizer losses to the environment.

Intensive and extensive field study
The Alberta study is comparing ESN, urea and a blend (75 per cent ESN and 25 per cent urea) under a range of application options and conditions to assess the agronomic, economic and environmental performance of the treatments and to provide recommendations about when to use which option.

Kryzanowski explains the blend was included in the treatments as a way to try to capture benefits of both ESN and urea. “There was a concern that the release of the nitrogen from the ESN pellet was a little bit too slow for the crop utilization, so a blend would provide some fast release and some slow release nitrogen. We also thought a blend might reduce seedling damage in comparison to urea alone. And a blend is less expensive than ESN alone.”

The study had nine field sites – eight dryland and one irrigated – ranging from the Peace Region to the Lethbridge area, with soil and weather data collected for each site. At each site, the researchers compared ESN, urea and the blend applied at 0, 30, 60, 90, and 120 kilograms per hectare. The ESN and urea treatments were fall-banded, spring-banded and spring seed-placed; the blend was spring seed-placed.

The study’s environmental component examined nitrous oxide emissions, which were measured at two dryland sites and the irrigated site. Along with determining how the different treatments affected nitrous oxide emissions, the researchers gathered measurements to help support the new Nitrous Oxide Emission Reduction Protocol. This protocol is one of the opportunities for producers in Alberta’s carbon offset market. By following the protocol’s practices, which are based on the 4R approach, Alberta crop growers can create credits that can be sold on this market.

Yield, protein and seedling damage results
Although yield responses to nitrogen fertilizer rate, form, timing and placement were significant for many sites and crops, the nature of the response differed greatly from site to site.

ESN was usually the best option for sites with higher moisture conditions. For example, he notes, “Under irrigation, it was clear that ESN is a very good performer in terms of productivity.”

Agronomically, spring application tended to be better than fall, with higher yields and greater nitrogen use.

“If you want to use urea, then banding is a much better option,” says Kryzanowski. “If you want to seed-place your nitrogen fertilizer, then ESN is the best choice because it results in less seedling damage, more yield and greater productivity.”

Canola suffered the greatest seedling injury from seed-placed urea, followed by wheat and then barley. “However, we found canola was able to recover from the seedling damage, as long as the plant population didn’t get too low,” he notes.

Economically, the blend looks best
To evaluate the economics, the researchers examined whether or not the value of the crop’s additional yield with ESN or the blend was large enough to offset the higher fertilizer costs compared to urea, using a partial budget approach. This analysis helps growers decide whether they should pay the extra for ESN, rather than use urea alone.

For instance, consider the results for Lacombe, calculated with the 2013 prices. In only 37.5 per cent of the fall-banded ESN treatments was the added canola yield high enough to offset the extra cost of ESN. In contrast, the added cost was worth it 87.5 per cent of the time when ESN was seed-placed. The higher canola prices and lower fertilizer cost differences in 2013, compared to 2014, make a big difference to the results.

The tables also show that when nitrogen is banded, ESN would not likely be worth the extra cost most of the time, particularly if it’s fall-banded – at most sites, there’s less than a 50-50 chance that the extra cost would pay off when fall-banded. Urea would usually be a better economic choice when banding.

The greatest economic benefits from using ESN or the blend were for canola, followed by wheat and then barley.

For all three crops, the economic results varied greatly within sites, between sites and between years. Kryzanowski says there were indications of regional differences. “Some sites were highly economical. For instance, under irrigation, it was easy to get higher yield productivity using ESN or the blend and the economic benefits from those higher yields. But when you started getting into drier conditions, the results became much more variable.”

Reducing nitrogen loss
Compared to the agronomic and economic results, nitrous oxide emission results were more consistent from site to site. Spring application was clearly the most effective way to reduce emissions. “We typically saw between 17 and 25 per cent reduction in nitrous oxide emissions by going from fall-applied to spring-applied nitrogen. Spring application avoids that most critical time for nitrogen loss, the thawing period,” says Kryzanowski.

Emissions tended to increase as the fertilizer rate increased. Regional differences in emissions were related to moisture, with the highest emissions at the irrigated site.

In-depth analysis coming soon
In the coming months, the researchers will be working on in-depth analyses of some key considerations. They are analyzing the data from this and other recent Alberta studies to develop improved fertilizer recommendations and update AFFIRM. For example, they are evaluating nitrogen mineralization from soil organic matter and its contribution to yield.

“We’ve had a measurement of nitrogen mineralization in AFFIRM, but we now want to get a better link between the total nitrogen available for the crop, how it is utilized by the crop, and how that affects how much fertilizer needs to be applied,” explains Kryzanowski.

The researchers are also mining the data for more information on nitrogen use efficiency, especially in terms of how much of the applied nitrogen is being captured by the crop under different conditions.

As well, they are examining the effects of regional climatic conditions, especially moisture, to determine when a producer should choose ESN versus a blend versus urea. “The challenge is to reliably predict where, when and for which crop the economic benefits of using ESN over urea [are evident],” says Kryzanowski.

They will also be increasing the flexibility available in AFFIRM regarding precipitation probabilities, to further enhance AFFIRM’s applicability across Alberta and into Saskatchewan and Manitoba.

And they are in the process of supporting the scientific basis of the Nitrous Oxide Emission Reduction Protocol, so crop growers can earn extra income by reducing their nitrogen losses.

The results from all this work will help crop growers make optimal nitrogen fertilizer choices for their own situation.

For now, Kryzanowski suggests growers consider using seed-placed ESN if seedling damage is a concern, if the economics are right (for example when growing a high value crop), and in higher moisture areas. If you are banding your nitrogen, then urea tends to be the best option economically.

And a seed-placed blend could be a better choice than either ESN alone or urea alone. “From our preliminary analysis, the seed-placed blend probably has the greatest potential for providing agronomic and economic benefits, as well as an environmental benefit, and minimizing seedling damage.” 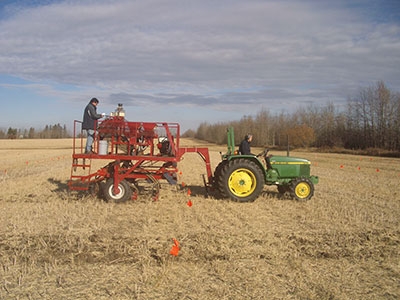