Adzuki bean acreage continues to grow. Can agronomy catch up?

Adzuki bean acreage is growing in leaps and bounds, but Ontario Bean Growers’ Maitland Underwood says there’s room in the market for at least another 10,000 acres of the crop. Photo courtesy of Meghan Moran, OMAFRA.

That’s still not enough to meet demand, according to Maitland Underwood, a board member at Ontario Bean Growers (OBG) and plant manager at Underwood Grain Ltd., a family-owned grain elevator and processor in Wingham, Ont. He says Japan and South Korea are the two biggest markets for Canadian adzuki beans. China used to be a major adzuki bean producer until many adzuki acres shifted to soybean in an attempt to shore up domestic supply, Underwood says. So, Canadian adzukis are well positioned to meet East Asian demand.

“Adzuki are the one market class at the grain elevator that we get calls about every day. We’re dying for adzukis. If we could grow another 10,000 acres of adzuki bean, there would be homes for them,” Underwood adds.

Ten years ago, there were perhaps 6,000 acres of adzuki bean in Ontario. Mike Donnelly-Vanderloo, chair of OBG, says the crop has made impressive strides in the province.

“Out West they call canola the ‘Cinderella’ crop. Adzuki bean is our mini version of a Cinderella bean crop in Ontario,” he says. “They started off on a very small scale and now they’re around our second biggest dry bean market class in Ontario [after navy beans].”

Agronomy
Adzukis aren’t going to be for everyone, however. There’s profitability to be had growing them, Underwood says, but they’re “intensely involved.”

Adam Ireland, who also serves on the OBG board and is the Ontario representative for Pulse Canada, echoes the warning. Ireland has grown adzuki beans for seven years. This year, he planted 450 acres.

“[It’s a] less-known crop, so you don’t have as much historical data to lean back on,” he says. “There are a lot of field passes to grow a crop, and it can vary in yield, which is frustrating when you have put a lot of work into a crop. I started with 60 acres and worked my way up. I’d recommend that strategy to new growers.”

There’s little to no agronomic advice out there for adzuki bean growers in Ontario, Ireland says; he’s had to work most issues out for himself through trial and error.

Like any edible bean crop, there are more field passes than for other crops, he says.

Ireland applies nitrogen, because there’s consensus that the crop doesn’t fix enough N on its own, as well as phosphorus and potassium.

There are fewer herbicide options for adzuki bean than soybean, he says. Typically, he’ll do a pre-emergent application of Pursuit or Prowl, then a graminicide in-season. Adzuki beans will continue to flower as long as there’s sun and moisture, so he says a pre-harvest desiccant is necessary. Adzuki bean has what Underwood calls a “legacy” issue with volunteers, and Ireland says that, in the year following the crop, a pre-plant herbicide with residual action is also necessary.

“All of my higher management goes into the adzuki bean,” he says. “I could rotate it out and grow soybean maybe three years after adzuki bean, but I wouldn’t want to grow soybean the year after – that would be a recipe for disaster.”

But the crop is sensitive to many herbicides, he notes in the paper.

Inputs aside, Ireland also notes that harvest has its challenges. The chief one is that harvest requires a lot of time and patience. “If you drive too fast, anything over 2.5 miles per hour will push them over. Even if you drive extremely slowly, you’re going to have some harvest loss, so there’s a lot of volunteer adzuki bean that grow in the following year.”

If IP soybean are a large part of a producer’s operation, Ireland warns that adzuki bean might not be a good fit due to the volunteer issue. 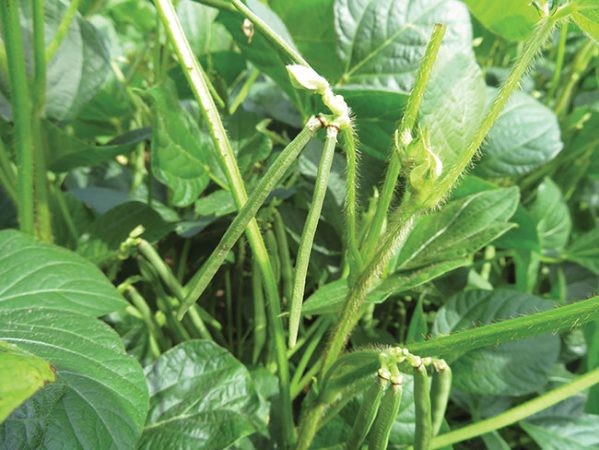 New varieties
Underwood says most varieties of adzuki bean have traditionally been bred in Japan and they’re tightly guarded with intellectual protection. Producers in Canada have been using the same variety of adzuki bean, called Erimo, for 50 years.

That could soon change. At the University of Guelph, K. Peter Pauls, a professor and breeder in the department of plant agriculture, leads an adzuki bean-breeding program.

Pauls says Erimo has excellent qualities for bean paste but has small seeds and a short stature, which contribute to harvest losses.

“The goals of the breeding program are to develop high-yielding, upright adzuki bean varieties with large, well-coloured seeds and excellent paste-making qualities. The long term goal of the breeding program is to provide improved adzuki bean varieties for Canadian producers suited for production in Canada that will command premium prices in international markets,” he says.

Pauls’ program began by crossing Erimo with other adzuki bean lines with larger seed sizes and taller stature. Field trials were performed in two Ontario locations – Woodstock and Elora – in 2020 and 2021, with really promising results.

Seed weight scores from lines with at least two years of Advanced Yield Trial information were greater than 10, the average for Erimo. Most lines outyielded Erimo, and a number of the high-yielding lines boasted harvestability scores equal to or better than Erimo, Pauls says. A number of these lines were also taller than Erimo and better suited to harvesting by direct combine.

“We have agreed to initiate breeder seed production of a line in Idaho to produce enough seed for larger scale evaluations of this line,” Pauls says. “The seed size of this line is 20 per cent larger than Erimo; it is 12 per cent higher yielding than Erimo and 12 per cent taller than Erimo. It was identified as a desirable line in the quality assessments performed by Japanese paste manufacturers.”

It’ll be a few years before this yet-unnamed variety reaches Canadian fields. But demand shows no signs of slowing. And if producers take their time learning about the crop’s unique requirements, it can be rewarding.

“Know your herbicide options and problem weeds before starting,” Ireland notes. “Be prepared for lots of sprayer time and combining is slow. But it is a rewarding crop to grow when it goes well.”