Bad news, dreaded for a decade, began accumulating over Ontario’s soybean industry like a heavy cloud in 2008, when the first glyphosate-resistant giant ragweed was discovered in the southwest, in Essex County. 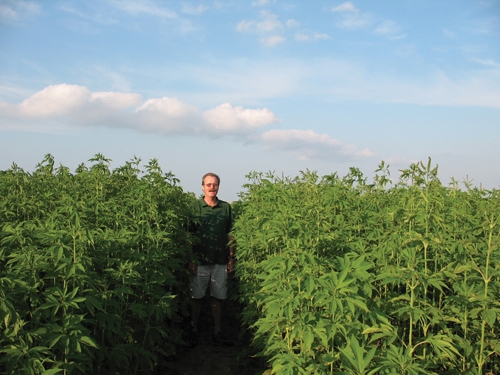 The situation deteriorated slowly. In 2012, new infestations were detected 400 kilometres east.
However, there’s good news and sunlight ahead for 2013, says Peter Sikkema, University of Guelph, Ridgetown Campus, weeds scientist. A User-Requested Minor Use Label Expansion (URMULE) was approved in September 2012 for the pre-plant application of 2,4-D Ester. In combination with glyphosate, the tank mix will effectively control glyphosate-resistant giant ragweed Ambrosia trifida, Sikkema says. The 2,4-D Ester should be used at a rate of 0.32 L/acre.
Recommended application timing for the burn-off tank mix is after giant ragweed emerges and a minimum of seven days before planting soybeans.

Gathering storm
Glyphosate-resistant soybeans helped support a boom in Ontario agriculture after their 1997 registration. Soybean acres popped over the two million acre threshold in 1997. Growers had increased confidence that this crop could be maintained weed-free until harvest.

For soybean growers with giant ragweed and its cousin common ragweed, these species are among the most difficult to control in IP (Identity Preserved) soybean. With the introduction of Roundup Ready soybeans, these weeds were much easier to control.

Warnings from agronomists and weed scientists that “even” Roundup could be compromised came home to roost in 2008 when one field was identified as having glyphosate-resistant giant ragweed.

“In 2009, we did an expanded survey and found 18 additional fields with glyphosate-resistant giant ragweed,” says Peter Sikkema. “In 2010, we had 46 fields in Essex County, one in Kent and one in Lambton county. In 2011, we found 23 additional fields, including a number in Middlesex County and in Lennox and Addington counties.”

Finding resistant giant ragweed in Lennox and Addington counties was a surprise because that county is about 400 kilometres east of the other counties with resistant ragweed populations.

Even though giant ragweed is a native broadleaf scattered in non-cropped areas throughout southern Ontario, it is mainly a problem in cropped areas in the southwestern part of the province. Basically,

Sikkema says, it has adapted to the crop production system of southwestern Ontario.As a native weed, giant ragweed has always been in Ontario. It was limited to margins around fields and to wet, low-lying areas. It became an issue for farming in the 1980s, when certain biotypes adapted to modern crop management systems, he says. If it has adequate moisture, adequate nutrients and little competition, the fast-growing annual giant ragweed plant can reach a height of 13 feet. It is many-branched, with large-lobed leaves. Seedlings can emerge late into the growing season depending on biotype and soil type. It flowers from August to October and is a notorious source of pollen for hay-fever sufferers.
Giant ragweed in soybean crops became a serious issue. It reduced yields by up to 90 percent and reduced cropping options, until growers could use glyphosate for weed control in soybeans after crop emergence.

Ragweed still can be found in corn and wheat but growers have alternative herbicides that provide effective control.
“For years, glyphosate provided effective control of giant ragweed in Roundup Ready crops,” Sikkema says.

While Roundup Ready soybean growers were enjoying year after year of weed-free fields, there were other growers producing conventional and identity-preserved soybean. They were relying heavily on Group 2 products for post-emerge weed control, after a glyphosate burndown.

Among the best of the Group 2 herbicides is FirstRate, a Dow AgroSciences broadleaf product that was registered for Eastern Canada about a decade ago.

“In IP or conventional soybeans, historically the best treatment was FirstRate. It did a very good job. We had about 90 percent control with it,” he says.

However, as of 2012, weed surveys identified four fields in Ontario that had multiple resistance issues. In these fields, giant ragweed was confirmed to have resistance to both glyphosate and FirstRate.
“Those farmers have a real challenge on their hands,” Sikkema says.

Tank-mix research
Resourceful soybean growers, and research scientists, can be trusted to look for the next best option. That happened in 2010 as Sikkema engaged two graduate students to test various tank mix options that might control the glyphosate-resistant giant ragweed populations.

Joe Vink and Joanna Follings took on the task. They tested more than 30 different tank mixes, with glyphosate, looking for something to control glyphosate-resistant giant ragweed in Roundup Ready soybeans. They conducted numerous trials at several locations in 2010, 2011 and 2012.

Experiments indicated that two of the tank mixes achieved more than 90-percent control when the resistant weeds were treated.

The research team, although pleased with the results, were disappointed with the poor control offered by most of the tank-mix options available to Ontario soybean producers.

Roundup plus 2,4-D Ester was the most effective. In 13 trials, it provided an average of 97-percent control of glyphosate-resistant giant ragweed. To achieve acceptable control of glyphosate-resistant giant ragweed, a minimum of rate of 0.30 L/acre of 2,4-D Ester 700 should be applied. Roundup plus Amitrol was the second best treatment.

Diversification continues to be the message. Weeds overcome effective herbicides through biological diversity. Growers need to overcome resistant weeds with diversity in rotations of crops and herbicides.Sikkema says, “Growers who have a diversified crop rotation with multiple herbicide modes of action over time, and who don’t rely exclusively on glyphosate for weed management, can reduce the probability of weed resistance appearing. I’m not saying it definitely won’t show up, but your chances will be better.