Keeping an eye out for soybean rust. 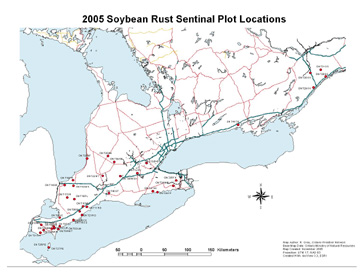 A lot has been written about Asian soybean rust (Phakospora pachyrhizi)
this past year and gratefully, Canadian soybean producers did not have to deal
with this new and invasive fungal disease in 2005. However, the risk to Ontario
soybean production from soybean rust is real and it has increased substantially
with the confirmation of the disease in the southern US in the fall of 2004.
Fortunately, infection occurred late last fall, and when you take into account
the cooler winter in the south, soybean rust levels going into the 2005 growing
season were slow to develop and spread.

Plant pathologists often refer to this as a 'build-up year' for a disease.
It was only late in the season that the disease really spread and going into
this winter things appear to be very much different than last year. First the
number of locations (incidence) in the southern US that have the disease is
substantially greater than last year. Also the amount of the disease (severity)
in both soybeans and Kudzu is much greater going into the winter. This is important
especially for Kudzu since this plant (or weed) is the primary over-wintering
host.

How much soybean rust and to what degree will it survive this winter, will
depend predominantly on the winter. Remember, the earlier soybean rust establishes
next spring the greater will be our risk to the disease. Being prepared for
this disease is critical to successful management, and 2005 allowed for a 'trial-run'
of the sentinel plot system – an integral component of our preparedness
for soybean rust.

As an extension of the comprehensive monitoring program put in place for the
2005 growing season by the United States Department of Agriculture (USDA), a
series of soybean sentinel plots (43) were established across the soybean production
region in southern Ontario from Windsor to Ottawa (see map). The Ontario sentinel
plots were added to the USDA's 1000 or more plots that stretched from Florida
up to North Dakota.

The sentinel plot program involves intensive scouting for symptoms and field
evaluations by the Ontario Ministry of Agriculture, Food and Rural Affairs (OMAFRA)
in conjunction with industry partners. Questionable leaf samples were screened
for the pathogen by Sarah Hambleton with Agriculture and Agri-Food Canada (AAFC)
in Ottawa using a rapid PCR-based detection tool developed by the USDA. Scouting
results were posted on the USDA web site (www.sbrusa.net) and the Ontario Soybean
Growers web site (www.soybean.on.ca).

Although soybean rust was not detected in Ontario or Canada during the 2005
growing season, the sentinel plot network provides an effective decision support
tool for producers and advisors considering whether a fungicide application
is appropriate. A 'preventative' fungicide for instance, must be applied prior
to the disease establishing and this network provides sufficient lead time.
In addition, tracking the disease within Ontario can assist in the switch from
'protective' to 'curative' fungicides. The sentinel plot system proved to be
a very effective and successful tool for producers, extension, consultants and
the soybean industry.

Funding for this project was provided in part by Agriculture and Agri-Food
Canada through the Agricultural Adaptation Council's CanAdvance Program, the
Ontario Soybean Growers and the Ontario Soybean Rust Coalition. -30-

*Albert Tenuta is an extension
plant pathologist for the Ontario Ministry of Agriculture, Food and Rural Affairs
at Ridgetown.