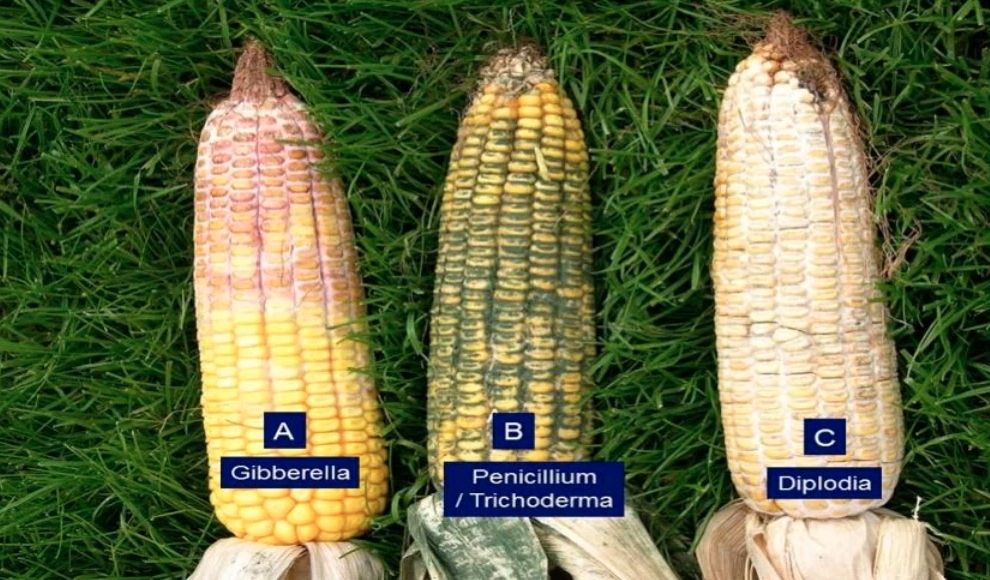 After a record year for deoxynivalenol (DON) in 2018, Ontario corn growers are seeing different results from this year’s provincial corn ear mould and mycotoxin survey. The 2019 survey found 96 per cent of samples tested low for DON, which is considerably lower than 2018.

Field crop specialists from Ontario’s Ministry of Agriculture, Food and Rural Affairs (OMAFRA), in collaboration with the Grain Farmers of Ontario (GFO) and members of the Ontario Agri-Business Association (OABA) conducted the annual Ontario grain corn ear mould and DON mycotoxin survey. The survey has been conducted every year since 2011.

In an update provided from OMAFRA by Ben Rosser, corn specialist, and Alberta Tenuta, field crop pathologist, they write that corn ear moulds such as Gibberella and their corresponding mycotoxins (DON) occur every year in Ontario. These mycotoxins, particularly DON, are produced primarily by Gibberella/Fusarium ear moulds and can be disruptive when fed to livestock, especially hogs.

In 2019, according to the survey, visual mould symptoms and DON concentrations in grain corn were much lower than 2018. Most samples exhibited no visual ear mould symptoms, and when they did, the mould symptoms were often associated with insect or bird feeding damage opening husks and damaging kernels. In samples where there wasn’t any apparent insect or bird feeding damage, weather and hybrid susceptibility were likely factors for the mould, Rosser and Tenuta explain in their update. 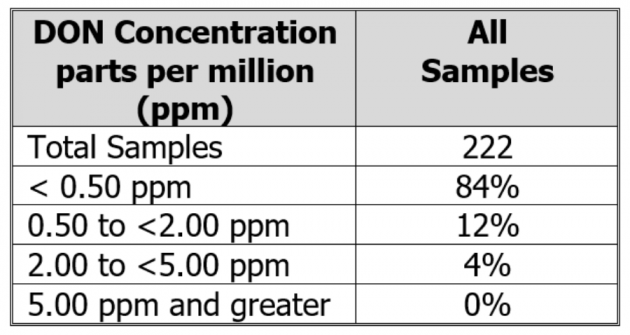 Last year, late rains in late July and August brought lots of humidity to the corn canopy creating the perfect conditions for mould growth. Gibberella, the mould of main concern in Ontario and where DON comes from, responded well to wetter conditions and spiked DON levels for that year. Rosser explained in Top Crop Manager‘s corn season in review that when compared to longer-term averages, the amount was larger than what is typically seen, but 2018 was similar to 2006, Ontario’s last high-testing year.

When comparing 2019 results to 2018, there are stark contrasts. Last year, 25 per cent of grain corn tested in the highest concentration category (five parts per million (ppm) and greater) and some corn growers were reporting DON levels as high as 30 ppm. This year, zero per cent of results tested in the highest category. Instead a majority of samples, 84 per cent, tested in the lowest category (less than 0.50 ppm) for DON concentration. An even larger majority, 96 per cent, still tested within the first two categories meaning that DON concentrations didn’t go beyond 2 ppm.

“While 96 per cent of 2019 samples tested below 2 ppm, it is important to remember that growers should remain vigilant and be aware of management options in those fields with higher ear mould and DON concentrations,” Rosser writes in the update. He explains that fields need to be assessed individually.

While DON does not discriminate, it does seem to play favourites. A distribution map shows that some of the highest testing samples for DON come from southwestern Ontario. In 2018, the majority of damaged acres were reported in southwestern Ontario in areas such as Middlesex, Elgin, Huron and Lambton. 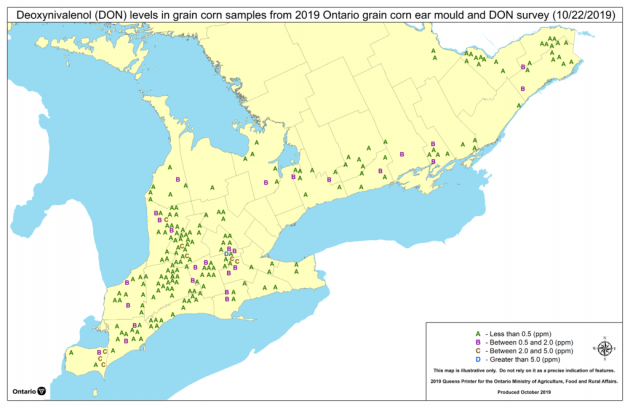 Weather is the biggest factor when it comes to mycotoxin issues but producers can decrease their risk through careful hybrid selection and proper fungicide timing. However, Ontario’s wet spring delayed corn planting and threw a curveball for many producers. With variable emergence comes variable silking, which complicates fungicide timing. Dave Hooker, associate professor at The University of Guelph Ridgetown Campus, explained in his presentation at Southwest Crop Diagnostic Days that proper fungicide timing can help reduce DON by 50 per cent. However, Hooker acknowledged that while applying fungicides at silking produces the best results for decreasing DON, producers facing variable silking should just try and spray when a majority of the crop is at silking as best as they can.

Rosser also explains within the update that the delayed season can help explain the low levels because the corn crop is less mature than it normally would be for this time of year. However, producers might be past the riskiest stage because the cooler months aren’t conducive to any more mould growth. “High grain moistures later in the growing season and slow dry down can be factors for ear mould development if ear moulds are established and environmental conditions are suitable, although cooler temperatures of November and December should also slow further mould development,” Rosser adds.

For more on the role of feeding damage, how to sample corn loads and what lies ahead, read the full update on the 2019 Ontario Grain Corn Ear Mould and Deoxynivalenol (DON) Mycotoxin Survey here.