July 17, 2020
By Ontario Ministry of Natural Resources and Forestry

The push continues to prevent the establishment of one of the most serious threats that Ontario’s natural environment could face – wild pigs.

“Once a wild pig population establishes itself and starts reproducing, it can be virtually impossible to eradicate if left unchecked,” said Erin Koen, a wildlife researcher with the Ontario Ministry of Natural Resources and Forestry (MNRF). “That’s why the Ontario government has been taking action to fight this threat on several fronts.”

Populations of wild pigs have been established in many regions of North America, including the Prairie provinces. In the U.S., wild pigs cause an estimated $1.5 billion in damage and control costs each year.

“Fortunately, Ontario still has time to prevent the establishment of wild pig populations in the province,” Koen said. 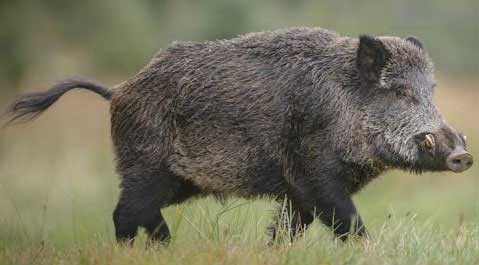 The appearance of wild pigs can vary greatly, with some sharing many similarities with wild boars. Photo courtesy of the Ministry of Natural Resources and Forestry.

In February, MNRF published a proposal on the Environmental Registry of Ontario, seeking feedback to determine what actions should be taken to prevent the introduction and spread of wild pigs.

The province has been gathering data and evaluating options for addressing invasive wild pigs. And the fight to contain wild pigs is being waged on the front lines as well.

This includes a pilot study to detect these elusive animals, based on sightings that have been reported by vigilant Ontarians from across the province.

The pilot study, which launched earlier this year, involves researchers investigating high-priority sightings with on-the-ground research techniques such as baited trail cameras and conversations with members of the local community.

While the follow-ups on wild pig sighting reports were paused during the COVID-19 outbreak, the ministry will continue these actions once it is safe to do so.

Ontarians can continue to help by reporting any pig they see outside of a fence.

“I can’t tell you how impressed we’ve been with the response we’ve had so far. Our research simply wouldn’t be possible without Ontario residents reporting their sightings,” Koen said.

The province often receives comments on how hunting could potentially solve the problem. But research from other regions shows that hunting is not an effective way to eradicate wild pig populations.

“It may seem counter-intuitive, but hunting can actually speed up the spread of invasive populations,” Koen said. “Wild pigs that are exposed to hunting pressure flee into new areas and learn to avoid humans.”

As a more effective solution, when ownership cannot be determined and the animal presents a threat to native species, ecosystems or people, the ministry is prepared to trap and remove individuals or entire groups of wild pigs – a technique that’s been proven to work well in other jurisdictions.

All of this research and effort is being channeled towards one specific goal: sparing Ontario from the destructive and costly impacts of invasive wild pigs.

Early results of the pilot study indicate that some of Ontario’s wild pigs are pot-bellied pigs that have escaped from their owners.

“We’re encouraging all owners of pigs, including Eurasian wild boar farmers and domestic pig owners, to ensure they keep their pigs contained. Preventing pig escapes is one of the most important things that Ontarians can do to address this growing concern,” Koen said.

For more information on invasive wild pigs in Ontario, visit www.ontario.ca/wildpigs. Ontarians are encouraged to report wild pig sightings by email at wildpigs@ontario.ca or at www.inaturalist.ca/projects/ontario-wild-pig-reporting?tab=observations.