Aug. 15, 2013 - The advantages of the "one-stop" shop have long been recognized in the retailing and services industries. Similar advantages would also be realized for the biofuels industry with the development of a "one-pot" processing system in which sugars could be extracted from biomass and turned into fuels in a single vat. A major step forward in this goal has been achieved by researchers with the U.S. Department of Energy (DOE)'s Joint BioEnergy Institute (JBEI) who report the first demonstration of a one-pot, wash-free, process for the ionic liquid pretreatment and saccharification of switchgrass, one of the leading potential biofuel feedstocks.

"By combining ionic liquid pretreatment and saccharification into a single vessel we eliminate the excessive use of water and waste disposal currently associated with washing biomass that is pretreated with ionic liquids," says chemical engineer Blake Simmons who heads JBEI's Deconstruction Division. "We also drastically simplify the downstream sugar/lignin recovery process and enable the ionic liquid to be recycled; all factors that help drive down biofuel production costs."

Simmons is one of the authors of a paper describing this research in the journal Green Chemistry. Seema Singh, director of JBEI's biomass pretreatment program, is the corresponding author. The paper is titled "One-pot ionic liquid pretreatment and saccharification of switchgrass." Other co-authors are Jian Shi, John Gladden, Noppadon Sathitsuksanoh, Pavan Kambam, Lucas Sandoval, Debjani Mitra, Sonny Zhang, Anthe George and Steven Singer.

Advanced biofuels made from cellulosic sugars stored in the biomass of grasses and other non-food crops and agricultural waste could substantially reduce the use of the fossil fuels responsible for the release of nearly 9 billion metric tons of excess carbon into the atmosphere each year. More than a billion tons of biomass are produced annually in the United States alone and fuels from this biomass could be clean, green and renewable substitutes for gasoline, diesel and jet fuel on a gallon-for-gallon basis. Unlike ethanol, transportation fuels from biomass can be directly dropped into today's engines and infrastructures without impacting performance.

If advanced biofuels are to be a commercial success, however, they must be cost-competitive with fossil fuels, which means economic technologies must be developed for extracting fermentable sugars from cellulosic biomass and synthesizing them into fuels as well as other valuable chemical products. Unlike the simple sugars in corn grain, the complex polysaccharides in biomass are deeply embedded within a tough woody material called lignin. In their efforts to develop cost-effective ways to deconstruct cellulosic biomass into fuel sugars, Simmons, Singh and their JBEI colleagues have focused on pretreatments of the biomass with ionic liquids – environmentally benign organic salts often used as green chemistry substitutes for volatile organic solvents. The ionic liquids that have emerged from this JBEI effort as a benchmark for biomass processing are imidazolium-based molten salts.

"Imidazolium is the most effective known ionic liquid for breaking down cellulosic biomass for enzymatic hydrolysis into fermentable sugars," Singh says. "However, imidazolium, like other ionic liquids, can inhibit the commercial enzyme cocktails now used for the saccharification of cellulosic biomass and must therefore be removed by substantial amounts of water after the pretreatment. The recycling and waste disposal costs associated with this required washing pose a significant challenge for the commercial scale-up of ionic liquid pretreatment technology."

To meet this challenge, JBEI researchers led by John Gladden, deputy director for fungal biotechnology, developed a compost-derived consortium of bacterium adapted to grow on switchgrass. They dubbed this consortium "Jtherm," and it consists of several species of thermophiles, microbes that thrive at extremely high temperatures and alkaline conditions.

"Jtherm is both an ionic liquid and heat tolerant cellulase cocktail that can liberate sugars from biomass in the presence of up to 20-percent ionic liquids," Gladden says.

In this latest effort, Simmons, Singh, Gladden and their colleagues used Jtherm for the saccharification of switchgrass following an imidazolium-based ionic liquid pretreatment. With this one-pot system, they liberated 81.2-percent glucose and 87.4-percent xylose over the course of a 72 hour processing at 70 degrees Celsius. They were then able to separate the sugars at better than 90-percent efficiency.

"Our results were very close to the 85-to-95-percent sugar yields that are typically achieved with separate pretreatment and saccharification processing steps," says Simmons. "Further improvements must be realized, primarily in the composition and activity of the enzyme cocktails used, in order to reach our target yields of better than 95-percent for all fermentable sugars."

Simmons says his deconstruction team is planning to have scale-up tests of this one-pot system tested at the Advanced Biofuels Process Demonstration Unit. They are also in the process of further optimizing/augmenting their Jtherm enzyme cocktail to improve sugar yields, and they are seeking to identify other ionic liquids that are even easier on hydrolyzing enzymes than the imidazolium-based molten salts. 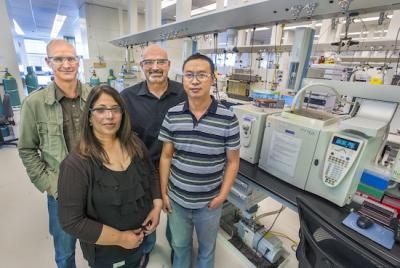 From left Researchers have developed a one-pot


Related
A “one-stop shop” for wasp identity information
When to stop spraying fungicides
Canada fleabane: what can we do to stop this weed from taking over?
Grain farmers want ethanol misinformation to stop