Research shows you can get those healthy omega-3 fatty acids not only from eating ground flaxseed and flaxseed oil, but also from the eggs, meat and milk of flaxseed-fed poultry, swine and cattle. Perhaps, then, it’s no surprise the Canadian flax industry is working to enhance and expand omega-3 opportunities with flaxseed feed and focusing on how flaxseed feed’s many healthy attributes can benefit animals, livestock producers and feed processors while expanding the flaxseed feed market for growers. 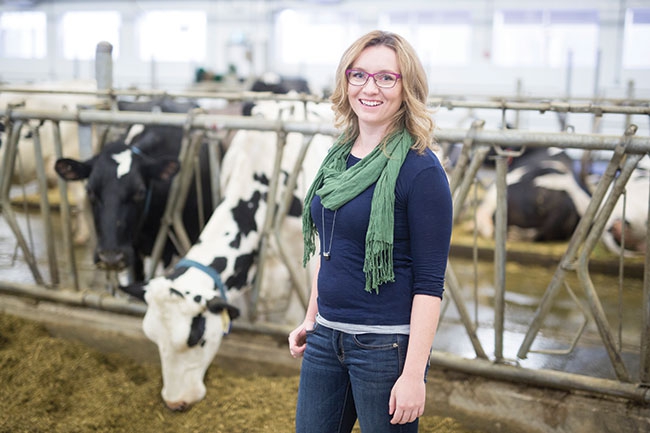 Omega-3 milk
The positive effects of flaxseed in dairy cattle feed were recently demonstrated in feeding trials at the University of Saskatchewan. As a master’s student, Janna Moats worked on this study under the supervision of David Christensen, a professor emeritus, and Timothy Mutsvangwa, a professor, both with the school’s department of animal and poultry science. A primary objective of the study was to improve the fatty acid composition of cow’s milk for human consumption in order to improve consumer availability of healthful fats like omega-3s.

“Flaxseed contains high levels of omega-3 fatty acids, which have been associated with health benefits by mitigating inflammation and acting as an antioxidant. Additional research has shown improved reproductive performance in animals that are fed flaxseed. This is largely attributed to the fatty acid composition of the oilseed and the presence of the plant compound lignan,” Moats explains.

“The key findings were that feeding dairy cattle flaxseed tended to result in more milk being produced by the animal compared to a control diet with no flaxseed. And feeding flaxseed in an extruded form compared to whole flaxseed had an even greater increase in milk yield. Other aspects of animal performance were maintained when we included flaxseed and rumen fermentation was not affected,” she says.

“In terms of the milk fatty acid profile, the primary change that we observed was a significant increase in total omega-3s in the milk when we fed flaxseed [to the cows]. As well, another fatty acid increased. It is known as CLA [conjugated linoleic acid], which is also considered very healthful for humans and has been suggested to be an anti-carcinogen. Lots of research still needs to be done on that fatty acid, but seeing an increase in the two was very exciting.”

Funders for this study included the National Research Council’s Industrial Research Assistance Program, SaskMilk and O&T Farms Ltd., a Regina-based feed processor. O&T was interested in this research because the company produces specialty feeds that have extruded flaxseed as an ingredient, such as LinPRO-R for cattle and LinPRO for swine and poultry.

O&T’s flaxseed feeds
After finishing her master’s degree, Moats accepted a full-time position as the research and development manager for O&T. She notes, “Feeding flaxseed isn’t a new concept. The benefits have been known for quite some time in animals for production and health purposes. I think the main challenge that producers had was how to actually use flaxseed on-farm. It is very difficult to handle; it can be dangerous when grinding on-site. What O&T Farms did was essentially to find a way to process the flaxseed in a way that can be used by the animal and used by the producers.”

When O&T started 50 years ago, it began as an egg layer operation and then expanded into other types of agricultural business. “We started to develop our own feed in the 1990s, for our own internal use, based on the rich fields of canola and flax abundant around us in Saskatchewan,” says Rob Dreger, director of sales and marketing at O&T Farms.

O&T’s feed operations grew, and in 2006, the company sold the layer operation to focus on its specialty feed operations. “We take the flaxseed and process it right within our province, adding value to it, and then provide it to the world, whether it be the Middle East, China, Korea, Bangladesh, Thailand, Kuwait, Morocco or throughout Canada and the United States,” Dreger says. O&T Farms was one of the finalists for the Saskatchewan Trade and Export Partnership’s Exporter of the Year Award in 2016.

“Omega-3s have a ‘halo of goodness.’ There is a very solid understanding by the general public that these polyunsaturated omega-3 fats are good for you and putting them into our diets is an important aspect of our health and nutrition,” Dreger says. “As we move forward, the strength of the flaxseed crop only grows in importance. I would envision that the U.S. market will continue to demand more omega-3 functional food products – dairy, meats, continued egg usage. And I believe we are going to see a huge demand from Asia because the real growth in prosperity is taking place across the seas and they are looking for better health and nutrition and omega-3 enrichment. I think it’s a win-win-win for the consumer, processor and producer of flaxseed.”

At the University of Saskatchewan

More than omega-3s
Rex Newkirk, an associate professor and research chair in feed processing technology in animal and poultry science at the University of Saskatchewan, sees two components in the future growth of the use of flaxseed in animal feed.

“One is that flax is well known for its omega-3 content, so the use of flaxseed and oil in things like laying hens for omega-3 eggs has steadily grown. People are aware of the health benefits for things like reproduction health in pigs, for example, and we are getting calls from people looking to include more flaxseed to try to enhance reproduction performance. So we’re seeing fairly slow and steady growth in those areas,” says Newkirk.

“However, I think most of the future growth will likely come from an interest in antibiotic-free diets. A number of companies, particularly restaurants, are saying they won’t accept or sell meat that has had antibiotics. That puts a challenge on the producer because antibiotics are used to fight disease, to give a healthy gut, and now we recognize that we need to do things a little differently to achieve that. And one of those things is to put healthy ingredients in the diet that promote a healthy gut. Flax has a number of components that could make [it] attractive in diets that have more of a broader audience rather than just strictly an omega-3 product scenario.”

For instance, flaxseed has both soluble and insoluble fibre, as well as lignans, which are antioxidants, and various vitamins and minerals.

According to Moats, O&T Farms’ collaborative research efforts are also moving in this direction: “Even though our primary focus has been to improve the fatty acid composition of meat, milk and eggs for human consumption, we are also starting to focus on the animal health and reproductive aspects. Especially with increased consumer demand for antibiotic-free feeding programs and alternative livestock housing systems, it has become imperative that producers find alternative sources to help in maintaining animal health and relieving stress on the animal.”

“I don’t think we have tapped the growth potential of incorporating flax in animal feed,” says Erwin Hanley, who sits on the board of directors for both the Flax Council of Canada and the producer group Saskatchewan Flax Development Commission (SaskFlax). The Flax Council, which includes representatives of flax growers, processors and other stakeholders in the flax industry, identified the feed industry as one of its priorities in its most recent strategic plan.

Hanley notes, “Animal feed is a file that has kind of been on the backburner for the flax industry. We have now decided that we should evaluate it again and try to capitalize on the healthiness of flax.”

Newkirk was recently asked to join the Flax Council’s board, to bring in his feed expertise, and they have had some initial discussions on what could be done to increase markets for flaxseed feed.

“One part is making sure we get the information in the hands of the users so they understand the benefits [of] flaxseed, and they have the tools and information they need,” Newkirk says. “For example, the council recently put out a fact sheet on flax in pet foods, and pet food is another area where I think there is room for growth for sure.” Newkirk is already undertaking some activities to get flaxseed feed information to users. For instance, he recently gave a seminar in China to raise awareness of the benefits of flaxseed feed, and he has been responding to calls about the nutritional and health benefits of flaxseed feed.

“Another part of it is to make sure we have the information necessary,” Newkirk adds. For instance, he would like to see research on topics like the effects of flaxseed feed on gut health as well as more activities to demonstrate the benefits of flaxseed feed in practical farm situations.

Hanley says, “What we really need to do at the Flax Council – in collaboration with SaskFlax, the Manitoba Flax Growers Association and the industry – is to figure out what activities we want to look at as it pertains to the next round of funding under the agricultural policy framework that the federal and provincial governments are working on.” Past agricultural policy frameworks have included funding for flax research through the Growing Forward and Growing Forward 2 programs. The next framework will be launched in April 2018.

SaskFlax and Newkirk also have some new flaxseed feed studies underway this year. “At SaskFlax, we’re working on a couple of activities on the animal feed side. For example, we will be starting a new project with David Christensen and Rex Newkirk at the [University of Saskatchewan] to look at the nutritional value of flaxseed and flax meal. We are going to provide different flax samples from across the province from different flax varieties, and they will analyze them and put that information into a feed database,” Hanley explains. Animal nutritionists will be able to go to that database for information they need to help in making recommendations for feed rations to producers and feed processors.

Newkirk will also be leading a new project on fibre in flaxseed meal and canola meal, funded by Saskatchewan’s Agriculture Development Fund, SaskFlax and the Saskatchewan Canola Development Commission. “In crops like flax, the insoluble fibre is healthy for the gut, but it also encapsulates some of the nutrients – it basically creates a barrier to digestion. So you want the fibre there but you don’t want to lose the nutrients,” he explains. “Also, some of the soluble fibres can sometimes have some negative impacts; for example, although mucilage can be healthful, it can have some anti-nutritive effects in that it can cause wet litter and things like that.” So he will be working on a steam-based process that makes the fibre more digestible by ruminants and makes the nutrients available to the animals.

Newkirk adds, “Flaxseed has a lot of what we understand to be healthful properties, including some benefits that we haven’t proven out scientifically because we haven’t put the time or resources into it. Flax oil is a very vibrant market, but I think for additional growth for our flax growers, particularly in more local markets, the feed market is a great opportunity. And with a little more information, I think we can make some good inroads there.”