Jul. 19, 2013 - Oilseed crops such as flax and camelina are growing and blooming again at the Mellinger Farm in Wooster, thanks to an Ohio State University research project that seeks to evaluate their many uses, including as animal feed and biofuel, and their potential to help diversify Ohio farms and boost their sustainability.

The 324-acre farm, established almost two centuries ago by Wayne County pioneer Benedict Mellinger, was donated in 2002 to the Ohio Agricultural Research and Development Center (OARDC) by Patricia Miller Quinby and the estate of her late sister, Virginia Miller Reed, both descendants of Mellinger. It is located just six miles west of the Wooster campus of OARDC, which the research arm of Ohio State's College of Food, Agricultural, and Environmental Sciences.

Also including canola and sunflower, this project represents the first research plots established on the working farm since it was donated, said Casey Hoy, Kellogg Endowed Chair in Agricultural Ecosystems Management, director of OARDC's Agroecosystems Management Program and principal investigator in this project, which was funded by an OARDC SEEDS grant.

The crops will be evaluated in terms of their growth characteristics, yield, oil content and animal feed quality. They will also be studied for their benefits to ecosystems, including floral resources for pollinators, biocontrol for pests and soil conditioning. "Oilseed crops could offer many benefits to diversified farms," said Hannah Whitehead, the research assistant coordinating the project. "They have the potential to add complexity to crop rotations, provide valuable ecosystem services, and deliver additional value chains in the form of on-farm biodiesel, cooking oil and highly nutritious feed for animals."

Flax was one of the staple crops grown by Mellinger and his family, who arrived in Wayne County in 1816 and cleared one of the first farms in the area. The Mellingers were weavers, so they used the land to keep sheep and grow flax, whose fibers can be spun into linen. The elaborate linen tablecloths and woolen coverlets made by the Mellingers are still highly sought after by collectors.

In addition to its fibers, flax is valuable for its seeds, which have a high oil content, can be consumed by people and livestock, and can be pressed to produce linseed oil. Linseed oil is used in a variety of products, including wood finishes, paints and linoleum. It is also consumed as a nutritional supplement due to its high level of omega-3 fatty acids.

A less common crop, camelina has only recently received research interest as it is being rediscovered for its nutritional value and potential as a biofuel. A cool-weather crop long cultivated in Eastern Europe, camelina was maligned elsewhere in Europe and in the U.S. as a weed that grew voluntarily in flax fields.

"European farmers probably brought camelina to the New World accidentally, mixed in with their flax seed," Whitehead said. "It is likely that Benedict Mellinger complained about the 'false flax' on his farm."

The oilseed demonstration and evaluation project is being conducted in collaboration with Organic Valley/CROPP Cooperative, which is collecting complementary data in plots on its research farm in La Farge, Wisc. The cooperative is especially interested in longer crop rotations with more diverse crops in them for its member farms, as well as the additional on-farm value that oilseed crops could offer, Whitehead said.

In September, Organic Valley will bring its mobile oil press to the Mellinger Farm to press the harvested seeds and offer a workshop for its Ohio members and other interested farmers. The oil, pressed meal and fiber will then be analyzed by OARDC researchers to evaluate their potential for fuel, cooking and animal feed.

"We're hoping to get a picture of the economic and ecological benefits that these crops could provide to an integrated farming system, including and beyond seed oil," Whitehead said. 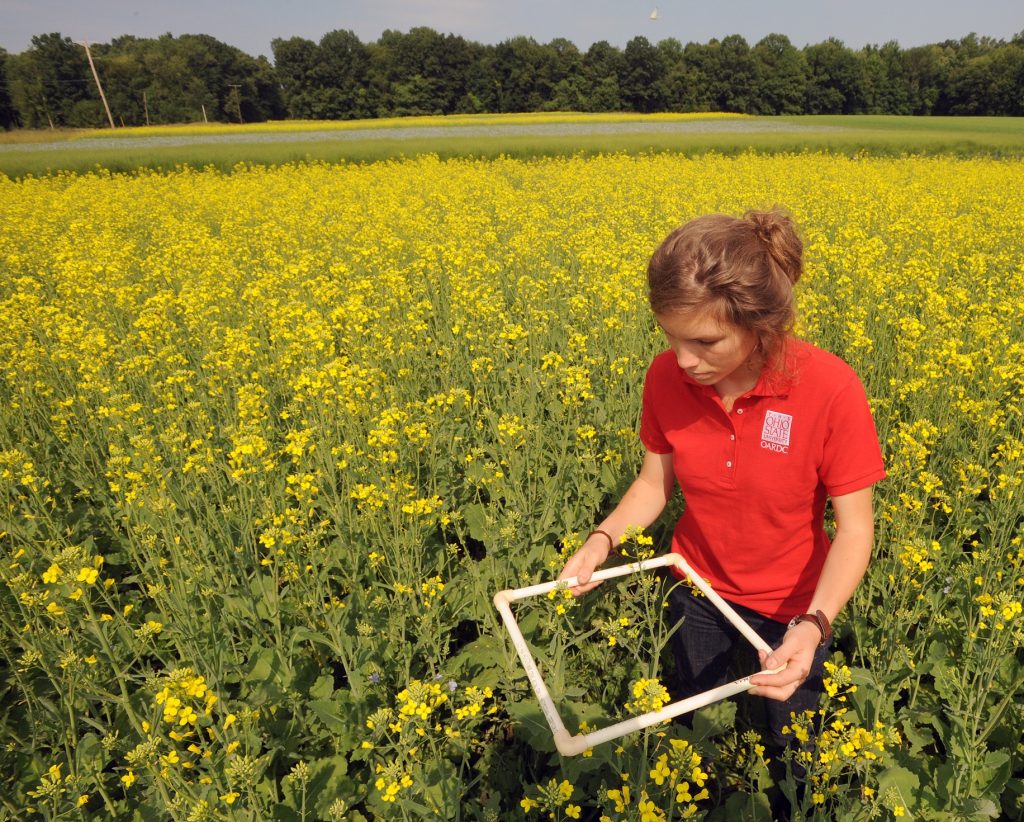 Research assistant Hannah Whitehead studies the plots of canola growing on the Mellinger Farm. A Ohio State University research project seeks to evaluate the many uses of flax and camelina
Print this page


Related
Ohio State receives $6.5 million for bioenergy and biofuel research
Crop rotation study: Evaluating the impact of forage crops on profitability
Brassica oilseed crops differ in response to sulphur fertilization
State of Sask. crops: many southern and central areas have received less than 100 mm of moisture since end of March