The irony is plain to see. Farmers used to cut herbicide rates to save on costs, but now Monsanto Canada is cautioning farmers against the opposite – applying rates of glyphosate higher or outside the label. The reason, explains Jesse Hamonic, canola trait marketing lead with Monsanto Canada at Winnipeg, Manitoba, is that spraying at a higher rate or past the six-leaf stage of canola can cut yield by 3 bu/ac or more.

“I realize farmers have valid reasons for increasing the application rate, such as trying to target hard-to-control weeds, or having application delays due to weather conditions, but we want to let farmers know there is a yield penalty for applying outside of label recommendations,” says Hamonic.

Monsanto conducted a two-year study with 53 data points across the Prairies to quantify the impact. The results pointed to an average 6.4 percent yield loss, equating to 3 bu/ac. The research was done in weed-free plots, which shows the true loss due to off-label application.

The recommended label rate of a Roundup brand agricultural herbicide applied to Genuity Roundup Ready canola is either two applications of 0.33 l/ac or one application of 0.5 l/ac applied at the zero-to-six-leaf stage.

The decline of glyphosate pricing has contributed to the practice of higher application rates. Six years ago, Roundup WeatherMax was selling for approximately $14 per litre. Now, that price is closer to $6.85 per litre. As a result, farmers are more likely to increase application rates to target tougher broadleaf weeds like dandelion, foxtail barley or wild buckwheat.

On the surface, the logic works. Roundup Ready canola is resistant to glyphosate, so why not increase the glyphosate rate to get cleaner fields and higher yields? Dave Kelner, canola technical lead with Monsanto Canada at Winnipeg, Manitoba, explains there is a limit to the tolerance, which is why the label guidelines were developed. He supervised the two-year Monsanto research on off-label applications.

“The symptoms are subtle. Sometimes we didn’t see them at all, but still measured yield loss,” he explains. “It’s very difficult to pick out a three-bushel difference in the field just by looking at it.”

Kelner also explains that the three-bushel average loss doesn’t tell the full story. The worst loss from spraying off-label was 33 percent. Another impact of off-label spraying that Kelner observed was delayed maturity. Later maturity can lead to frost damage and increased green seed, although this impact wasn’t specifically measured in the study.

Sometimes, though, farmers’ hands are tied if weather delays spraying past the six-leaf stage. In this case, it’s a tough call for farmers: whether to proceed with spraying and risk yield loss due to late application, or risk yield loss due to weed competition. In this scenario, if the decision is made to go ahead and spray, at least stay within label rates to help minimize the impact of late application; but since the application is off-label the risk lies with the farmer.

Hamonic says that Monsanto wants to get the message out so that farmers can make their own decision with full information on whether to increase application rates. “There is a risk/reward equation. We want farmers to know what the risks are as they may not even know there can be a detrimental impact on yield. But at today’s canola prices, 3 bu/ac loss can add up to about $40/ac. 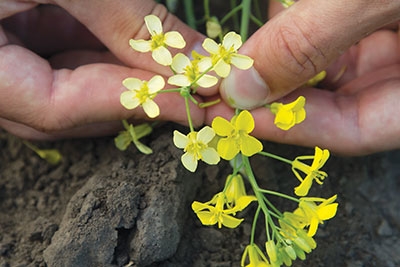