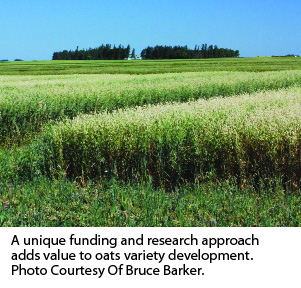 An innovative partnership between the University of Saskatchewan, seed growers, industry and the provincial government of Saskatchewan has resulted in the development of a new oats variety with a nutritional profile similar to barley.

“The low acid detergent lignin hull (LLH) is more digestible, and with the higher groat fat/oil (HOG) content, it is a higher energy feed for cattle, especially for the dairy industry,” explains plant breeder Brian Rossnagel with the Crop Development Centre (CDC) at the University of Saskatchewan. Traditional oats has less nutritional value than barley because it has more hull and normal oats hull is less digestible.

CDC SO-I was not developed along conventional funding or market development methods. The project began in 1999 with Rossnagel working with researchers at the University of Saskatchewan Department of Animal and Poultry Science, and the Prairie Feed Resource Centre (now Feeds Innovation Institute). They determined that an oats with a more digestible hull and increased fat content would be beneficial for cattle, especially in certain premium markets.

After initially running into funding difficulties to move the oats type forward, the University of Saskatchewan group advertised in the newspaper looking for support and convened a meeting of interested parties. That resulted in the formation of Super Oats Canada, which became the funding consortium supporting the R&D work. It initially included a diverse group, but has evolved to include individual seed growers, independent financial backers and FarmPure Seeds, which is now the majority shareholder.

“The group came together and recognized an opportunity to add value to oats,” explains Trenton Baisley, president of Super Oats Canada and CEO of FarmPure Family of Companies in Regina. Super Oats Canada came on board for $210,000 for six years starting in 1999. With their commitment, funding was obtained from the Saskatchewan government’s Agriculture Development Fund with a $207,000 commitment.

“The funding was on a go-no-go basis. If, after two years, our proof-of-concept feeding work hadn’t shown value, the longer-term main plant breeding project could be cancelled,” explains Rossnagel.

Obviously, that did not happen.

The unique approach to the development of CDC SO-I was proof-of-concept testing of prototypes prior to registration. Typically, most feed grain varieties are developed and registered before getting to livestock nutrition researchers for evaluation and market development. The University of Saskatchewan group turned this on its head by first producing prototypes with the desired nutritional profile for animal testing while starting the variety development/plant breeding process. As the livestock researchers were working on feeding trials, Rossnagel continued with the early and less costly phases of variety development.

“We developed the prototype in the first two years and found that they had good feeding potential,” explains Rossnagel. “That gave us a three year head start on where we would normally have been, plus greater incentive to move forward as fast as possible since we had much greater assurance we were producing a winner.”

Off to the camel races

To generate additional value for oats growers, market development will be key. Rossnagel says that the new oats has good potential in the cattle industry, especially for dairy and backgrounding beef calves. While some of the oats will be used domestically, the big market for the new oats will be in southeast Asia, where digestible fibre is important.

“Because of various restrictions, they use a lot of fibre that has poor digestibility. This LLH-HOG oats will be a good replacement with its higher energy and more digestible fibre, and it all comes in a single one-grain package,” explains Rossnagel.

Baisley says that market development is gaining momentum. They have had requests from organizations as diverse as camel racers and cosmetic companies. Equestrian breeders have asked for exclusive rights to the Super Oats. Companies in Britain are interested in the high oil content to use oats oil in cosmetics. And of course, the dairy industry, as Rossnagel indicated, is also interested.

Agronomically, CDC SO-I is a reasonably good variety. Yields are not as high as the best and newest oats varieties on the market today, but are better than the standard variety Derby. Straw strength is also better than Derby. While CDC SO-I did have rust resistance for the eastern prairie region during development, the rust races have recently mutated and it, like other previously resistant varieties, is now susceptible.

“The variety should be more than adequate for producers, especially outside the rust area,” says Rossnagel. “The only caution is that millers won’t want the oats as they don’t want the higher groat fat content.”

With the initial six year funding cycle completed, Super Oats Canada renewed their commitment with another five year funding agreement, and is now the sole funder to the CDC Super Oats breeding program. The CDC program is working to improve the agronomic traits, including yield potential and  rust resistance.

How the oats ends up being marketed to end users remains to be played out, but logic dictates that farmers would benefit from an Identity Preserved (IP) program to capture the increased value of the oat. With seed multiplication underway with FarmPure Seeds, CDC SO-I certified seed is expected to be available in 2009. How contracts are handled and how markets are developed is still under development, though, so stay tuned.