What does it take to grow a 200-bushel per acre oat crop? That’s what research manager Chris Holzapfel at the Indian Head Agricultural Research Foundation wondered when he saw that kind of yield in both commercial fields and small plots near Indian Head, Sask., in 2013.

In 2014 at Indian Head, Holzapfel looked at oat response to N, P and potassium (K) fertilizer with funding from the Agricultural Demonstration of Practices and Technologies (ADOPT) program. The treatments compared were 12 different combinations of applied rates of N, P and K fertilizer. The N rates were 49 and 103 lbs N per acre, the P rates were 0, 18, and 36 lbs P2O5 per acre, and the K rates were 0 and 27 lbs K2O per acre. Soil residual N and P at this location were low, while K was high.

Holzapfel says increasing N rates from 49 to 103 lbs N resulted in a 20 per cent yield increase but also resulted in significant reductions in both test weight and thousand kernel weights. He says P fertilization reduced the impact on quality to a certain extent and resulted in an average overall yield increase of four per cent, but no short-term agronomic benefits were detected when rates were increased from 18 to 36 lbs P2O5. (See Table 1.)

“We saw a massive early season response to phosphorus. There was a very noticeable improvement in vegetative growth, but at the higher rate, it didn’t translate into a yield benefit,” Holzapfel says.

There were no statistically or agronomically significant benefits to K fertilization detected with respect to either lodging, yield or grain quality under these specific field conditions

Holzapfel had hoped to carry the research forward into 2015, but did not have funding to do so. However, other research at Indian Head, this by Agriculture and Agri-Food Canada (AAFC) researcher Bill May, found similar results in a three-year study in 2003 through 2005. Phosphorus response was analyzed as part of a larger study on P and seeding rate to increase the competitiveness of tame oat on wild oat. Holzapfel was also part of the study.

“We didn’t see an interaction of phosphorus and seeding rate on wild oat. Seeding rate was more important than the addition of phosphorus on controlling wild oats in a crop of tame oat,” May says. “We did see a small yield response to phosphate fertilizer.” (See Table 2.) 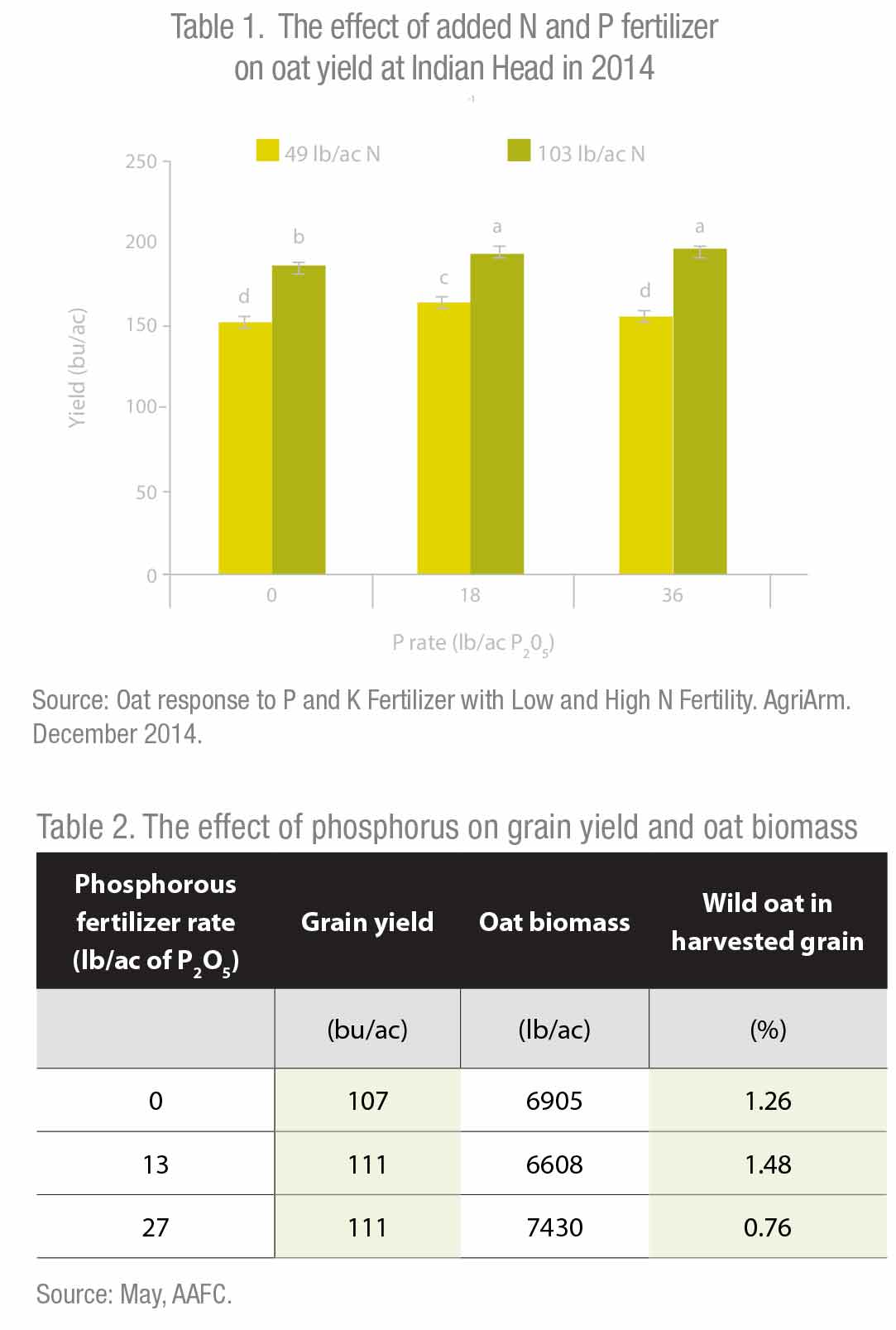 These studies on P and K were consistent with another study conducted by Ramona Mohr with AAFC at Brandon, Man. Her three-year study was conducted from 2000 through 2003 and looked at varying rates of N, P and K fertilizer. Nitrogen was applied at 0, 35, 71, and 106 lbs N per acre. Phosphate rates were 0, 26 and 53 lbs P2O5 per acre. Potassium rates were 0 and 35 lbs. K2O per acre.

Mohr published the results in the Canadian Journal of Soil Science in 2007. She reported that “low to moderate N rates significantly increased yield, with optimum relative yield achieved with a plant-available N supply of approximately 90 lbs N per acre. Increasing N rate also increased lodging and reduced test weight, kernel weight and kernel plumpness, suggesting that optimal N management must balance yield improvement against reductions in grain quality.” Based on this and other studies, Manitoba provincial guidelines recommend a plant-available N supply (soil test nitrate-N in 0-24 in. plus fertilizer N) of 100 lb/ac for oat.

Phosphate fertilizer increased yield in two of six site-years, but had no overall effect on quality. Yield increases were observed at locations with dry, cool early-season conditions combined with low to moderate soil test P.

Application of potassium chloride fertilizer (KC1) resulted in small increases in yield (78 lbs/ac), kernel weight and kernel plumpness on moderate to high K soils, which were “not likely to provide a significant economic benefit.”

“The lack of consistent interactions among N, P and KCl suggests these nutrients may be managed individually,” Mohr says.

May says the P response in the studies is typical of most cereals. He quite often sees a vegetative response to P on the heavy clay soils typical of his area when conditions are dry and cool, which can translate into a yield response as well.

“I wouldn’t expect oat to be any different to other cereal crops. You can see early season vegetative response in some years, but not necessarily a yield response,” May says.

Holzapfel says the research has shown that oat response to phosphorus fertilizer application can be inconsistent, but maintaining P levels is important from a long-term soil quality perspective. The crop in his demonstration presumably removed over 44 lbs P2O5 per acre in the highest yielding treatments.

“When you are removing that level of phosphorus from the soil, you need to be replacing it or you will be drawing down the soil residual phosphorus reserves. You are fertilizing the soil as much as you are trying to feed the crop,” Holzapfel says. 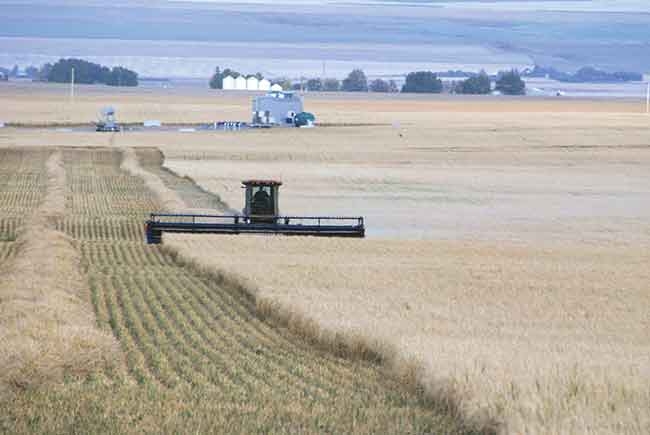 Manage phosphorus in oats for long term fertility. What does it take to grow a 200-bushel per acre oat crop? That’s what research manager Chris Holzapfel at the Indian Head Agricultural Research Foundation wondered when he saw that kind of yield in both commercial fields and small plots near Indian Head