Switchgrass may be the next candidate. 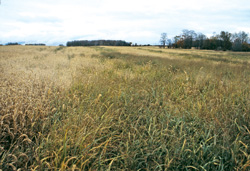 Some people might call Don Nott a visionary. He sees himself as someone who
simply saw the writing on the wall and decided to do something about it.

In 2004, Nott sold all of his cash cropping equipment, downsized from the 12,000
acres he was managing to 3600 and began the process of establishing a new business
direction for himself and his son. He kept the oat processing plant that he
had been operating for the horse feed market, but developed a plan to make pellets
from the oat hulls to sell primarily to the greenhouse industry.

Nearly three years later, things have yet to slow down. In addition to the
oats and biomass businesses, Nott is selling to the hay and straw markets, as
well. Now, he is hoping to add switchgrass to the energy side of his operation,
which may help overcome some of the problems that have arisen with the oat hull
pellets. "We discovered over the course of the past 14 to 15 months that
all biomass is not created equal," explains Nott, who farms outside Clinton,
Ontario. "You have to be careful with what you use because some of these
products do not burn nearly as well, some of them create contamination in the
atmosphere and some can cause fouling inside the biomass burners themselves.
We've found that my original process is probably the best."

The pelletizer unit he uses grinds and extrudes the pellets from a combination
of oat hulls and wheat byproducts. Nott is reluctant to share too much information
about the binding agent, saying only that it is a naturally created byproduct
of the grinding and extrusion process. "It's better than corn, it's certainly
better than coal, it has good heat and lower cost than wood pellets and it's
had a pretty good reception," he says, paying particular tribute to the
entrepreneurs who have purchased boilers and burners and are customers for his
oat hull pellets.

Some challenges to overcome
As environmentally positive as the prospect of an annually renewable fuel source
is, however, Nott has discovered that some customers are having problems with
this new technology. "You have to remember, for a greenhouse operator working
with natural gas, life was pretty easy: you flick the switch, gas comes on,
the unit burns and there's very little to look after," explains Nott. "But
biomass boilers require cleaning, daily. They require monitoring, because you're
burning a solid fuel instead of a liquid or a gas. We've taken a step back in
the world of technology because these machines are not up to gas standards,
and gas is clean and you can't get around that fact."

Oat hulls burn relatively cleanly with a certain amount of smoke out of the
stack. There is also an odour issue and that has caused some concern from the
Ministry of the Environment. Nott has one customer in the Niagara region that
recently decided to stop using the oat hull pellets and switched to coal, much
to the chagrin of MOE officials. Yet there is no regulation in place to prevent
anyone in Ontario from burning coal.

"The nice thing about biomass is that it's carbon neutral: we're not doing
anything bad to the atmosphere, even though it may have an odour," says
Nott, adding that oat hulls emit an odour similar to burnt popcorn. "But
when you burn coal or natural gas, you're polluting that atmosphere again. By
burning biomass, you're helping the atmosphere and these people who took the
courageous step of putting in a biomass boiler are being proactive for the environment."

Nott mentions that the companies involved in the design and manufacture of
the boilers are working now on cleaning the smoke stacks as well as the odour
issues, but all of that takes time. And his concern is that North Americans
are facing an energy crisis in the making. The Ontario government is not moving
fast enough to allow companies or individuals to build wind generating plants
to supplement the provincial power grid. Nor are they at a suitable pace for
other alternatives like biogas.

According to Nott, politicians are expending energy in a bid to develop more
nuclear-generating capacity 10 to 20 years down the road. A more immediate concern
is the trend of developing countries, like India and China, continuing to demand
more power and resources as their middle income brackets continue to grow. "We
need to be on this path at lightning speed to try to bring the technology to
a higher level, to learn how to deal with growing our fuel in the future,"
says Nott.

The next step
The next development for Nott's operation is exploring the use of switchgrass
in his pelletizer. Nott has been working with Roger Samson of Resource Efficient
Agricultural Production (REAP) Canada, based in Quebec. Samson has processed
pellets from switchgrass and is trying to develop the market in North America
as well as Europe, and has had some success attracting attention from one of
China's largest boiler manufacturers. Nott planted 326 acres of switchgrass
in 2006, sowing it like grass seed at nine pounds per acre, and is awaiting
results of laboratory tests from Ottawa. "I can't say a whole lot about
switchgrass yet, because we just don't have enough on-the-ground testing to
know what the results are going to be," says Nott.

What he does know is that switchgrass can be seeded directly or with oats as
a cover crop but it requires warm weather to really get growing. His planting
date is around May 20 and once established, the grass grows so aggressively
that weed control is not an issue. At flowering, switchgrass stands as high
as seven feet and will suppress foxtail. The only word of caution actually comes
by way of Samson. "In the first year, he says, close your eyes because
you'll see a lot of foxtail," relates Nott (see photo), adding that Pardner
and atrazine can be applied that first year to control weeds. "After that,
it's not needed. One grower in Quebec found it even chokes out quackgrass."

As far as harvesting is concerned, Nott says there are two options: growers
can bale it or cut it and leave it in the swath until spring. Lying in the swath
degrades the chlorine in the plant which is a desirable natural process, yet
Nott thinks he will bale his. For that, the best scenario is to have a killer
frost just before harvesting.

Nott estimates he needs to produce 30,000 tonnes of switchgrass each year to
supply 100 acres of greenhouses for a year, and the technology exists to make
that happen. All it requires is the willingness to make it work. -30-