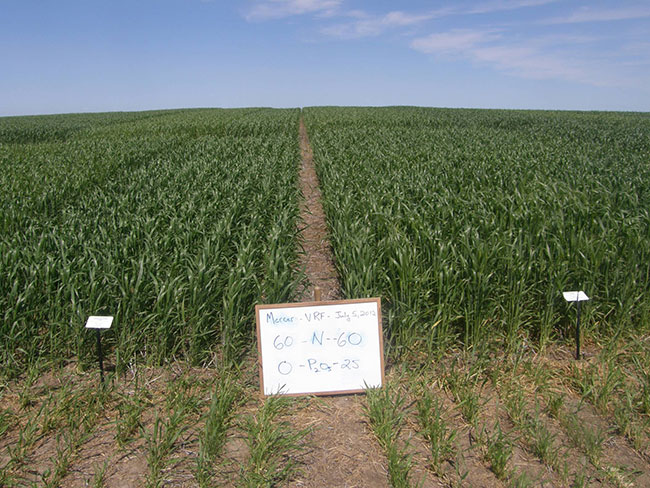 Phosphorus (P)
About 80 per cent of Prairie soils are marginal or deficient in plant-available soil phosphorus (P) for cereal crop production. Phosphorus is one of the most limiting soil nutrient in cereal production, second only to nitrogen (N).

Adequate P results in rapid crop growth, earlier maturity and higher yield. An adequate supply of available P in soil is associated with increased root growth, which means roots can explore more soil for nutrients and moisture. By the time a cereal crop has attained about 25 per cent of its total dry weight, up to 75 per cent of the total P requirement has been taken up. A good supply of P is important during the early growth stages of cereals.

Cereal crop response to applied P fertilizer depends on the level of plant-available P already in the soil, as well as soil moisture and temperature conditions early in the growing season.

The level of plant-available P in soil, as measured by a soil test, varies with the extraction solution method used by the laboratory. The modified Kelowna soil test is typically used in Alberta and Saskatchewan. Alberta research identified this as the best method for predicting P crop response and is the only recommended method in Alberta. The Olson method, also referred to as the sodium bicarbonate method, is the recommended method for Manitoba. The Bray method used to determine soil P has not been calibrated to soils in Western Canada, and is not an endorsed method for making fertilizer recommendations.

Soil P levels have gradually increased in some fields over the years because of repeated annual P fertilization or manure application. As a result, crops grown on these soils are less responsive or not responsive to P fertilizer application.

In recent years, many Prairie farmers have not been applying enough P fertilizer to replace crop removal, resulting in a decline in soil test P levels in fields for many farmers. It is important to test soil for plant-available P and apply sufficient P fertilizer to replace amounts removed in harvested crops to maintain good soil P levels.

Alberta research suggests that placement of P with the seed is often slightly better than banded P, and both methods are superior to broadcast-incorporation of P fertilizer when soil test P level is low.

Table 2 provides general phosphate (P2O5) fertilizer recommendations for wheat using the modified Kelowna method. Table 3 provides the probability of a greater than two and five bushel per acre (bu/ac) yield response when following the recommended P2O5 from Table 2 (See Alberta Agriculture Agdex 542-3 for barley recommendations). Soil test P levels in Table 2 are in pounds per acre (lb./ac). When a soil test for P is reported in parts per million (ppm) for a zero- to six-inch (zero- to 15-centimetre) soil sample depth, multiply the ppm value by two to convert to lb. P/ac.

When soil test P levels are medium to high, and significant P fertilizer has been applied in the past 10 to 20 years, an annual maintenance application of phosphate fertilizer can be used to meet crop requirements and replenish soil P that is removed.

Up to 50 lb P2O5/ac (55 kg P2O5/ha) can be safely seed-placed with wheat or barley if seedbed utilization (SBU) is 10 per cent and no other fertilizer is seed-placed. To obtain best P fertilizer efficiency, adequate rates of N and other required nutrients must also be available to the crop, preferably in a side or mid-row band away from the seed.

Potassium (K)
Cereal crops take up nearly as much potassium (K) as N and therefore have a high K requirement. However, only about 20 per cent of the K taken up is contained in the seed, while the remaining K in crop residue is normally returned to the soil. Potassium in the plant residue remains in inorganic form and is fairly quickly returned to plant-available form in the soil. 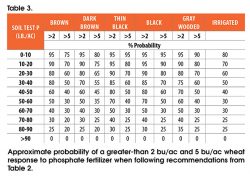 About 75 per cent of Prairie cultivated soils have extractable soil K levels in the range of 300 to more than 800 lb. K/ac (330 to 900 kg/ha) in the top zero- to six-inch (zero- to 15-cm) depth, which is more than adequate to achieve optimum cereal crop production. About 25 per cent of Prairie soils are marginal to deficient in soil K.

Cereals usually do not respond to K fertilizer when soil test levels are greater than 250 lb K/ac (280 kg K/ha) in the zero- to six-inch (zero- to 15-cm) depth. On fields that test less than 250 lb K/ac, or on sandy soils or intensively cropped fields, K fertilizer may be necessary. General potassium fertilizer recommendations for wheat are summarized in Table 4.

Sulphur (S)
Cereal crops have a moderate requirement for sulphate-sulphur (SO4-S). Unlike N and P, which are both readily translocated within plants, sulphate-S is immobile. Consequently, cereals require a constant supply of available sulphate-S throughout the growing season. Sulphur is an important constituent of seed protein. 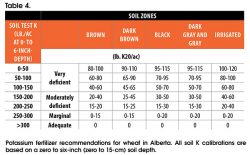 The general S fertilizer recommendation for cereal production is 10 to 25 lb. S/ac (11 to 27 kg/ha actual S), using a sulphate fertilizer source such as ammonium sulphate (21-0-0-24), when soils are low in S. Sulphate fertilizer effectively corrects S deficiency. Often, soils in the Brown and Dark Brown soil zones have adequate sulphate-S in subsoil for cereal crop production. But, if soil test sulphate-S is low (<15 lb. S/ac) in the zero- to six-inch depth, it is wise to add 10 lb. SO4-S/ac to ensure S deficiency does not occur in early stages of growth.

If detected early enough, S deficiency in cereals can be corrected by in-crop broadcasting of ammonium sulphate. The greatest risk from using soluble sulphate fertilizers occurs on sandy soils subjected to heavy rainfall, which may cause sulphate-S to leach below the rooting zone.

Elemental sulphur (S°) fertilizer can also be used, but must be used correctly to be effective. Elemental S° has advantages because of lower cost, high analysis and lower transportation costs. The disadvantage of this fertilizer is that elemental S° fertilizer must be oxidized by soil microbes to convert to sulphate. The rate of conversion from S° to plant-available sulphate depends on the particle size, as well as the method of application. Often it may take several months for S° to become plant-available, or even years if particle size is large.

For best management, an S° product should have a small particle size (<75 microns) and should be surface broadcast without incorporation, ideally in the fall the year before benefits are needed. Elemental S° with a small particle size, broadcast on the soil surface, will easily disperse on the soil surface due to rainfall and freeze/thaw action. Then it can be incorporated into the soil, allowing soil microbes to oxidize and convert to sulphate. Banding or broadcasting followed by immediate incorporation is an inefficient method of applying S° and is not recommended, because application prevents S° granules from dispersing. Liquid suspension S° products are being developed for spray application, with very small micron size. Producers must use care in deciding whether to use ammonium sulphate fertilizer versus elemental S°, and should seek advice from an experienced agronomist.