Weed control is one of the main challenges for flax growers, and is even more challenging under organic production systems. Because flax is a poor competitor with weeds, yield losses can be significant when weeds are present. Cultural and mechanical control options can be effective techniques for weed suppression and control in flax. 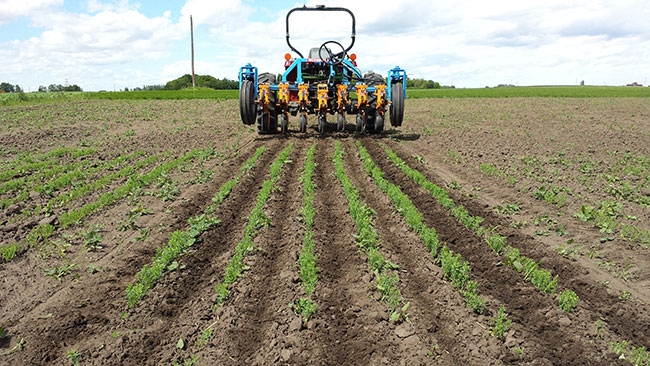 Inter-row cultivator. Weed control is one of the main challenges for flax growers

Researchers at the University of Saskatchewan have been evaluating combinations of cultural and mechanical weed suppression and control options over the past few years. An early component of the project evaluated various winter cereals as an intercrop with flax at different seeding rates to try and establish a groundcover as a weed suppression tool. The concept was to seed the crops as an intercrop in the first year; the winter cereals would act as a groundcover and then be harvested in the following year. However, the winter cereals, such as fall rye, winter wheat, winter triticale, winter barley and others all outcompeted the flax in the trials resulting in large yield losses. There was also significant amounts of winterkill in the cereals. Researchers decided to explore other control
options including higher seeding rates and mechanical control, and discontinued the intercrop trials.

Seeding rates
The trials showed that increasing flax seeding rate was the single most effective tool in increasing yield and suppressing weeds. For conventional production, the recommended flax seeding rate is approximately 500 to 800 seeds/m2. The study provided strong evidence that growers of organic flax should seed at least 2.5 times the conventional recommendation to maximize yield and weed suppression. “Preliminary results showed that flax yields were still increasing even at the highest seeding rate of 2,000 plants/m2,” Syrovy says. “We need to complete the economics of the feasibility of seeding organic flax at very high rates to determine the best rates. However, the results strongly show that increasing the flax seeding rate is a very important tool for improving crop competitiveness and yields in organic systems and something growers should consider. The optimal seeding rate when there are weeds is usually quite a bit higher than when there are no weeds.”

Mechanical weed control
Mechanical weed control options were also tested at each of the seeding rates, comparing a control, each mechanical option individually and in combination. The rotary hoe treatment was done after seeding, when the first flush of weeds started to crack the ground surface. “The challenge is that at that stage the flax is also close to the surface and poorly anchored, and is small seeded just like the weeds we were targeting, so we did see a lot of thinning of the flax especially at the low seeding rates,” Syrovy says. “As the seeding rates increased so did the crop tolerance and we saw better results. We also tried a second rotary hoe treatment if there was a second flush of weeds, however the second treatment was quite hard on the crop.”

“Inter-row cultivators are starting to get a lot of attention and there are some nice camera guided systems available,” Syrovy says. “Our research plot system is a manual version, so you have to walk behind and manually steer between the rows. We have a 12-inch row spacing to match our seeding equipment, but growers can order a machine to match their row spacing from the manufacturer. These tools work better at controlling annual weeds in between the rows than perennial weeds, although they will cut off the tops and potentially suppress perennial weed growth. The best time of the mechanical treatment is based mostly on the stage of weeds and crop stage. The inter-row cultivator also works well in other crops, and other research with pulse crops for example showed the best timing is at the four or five node stage, before the pulse crop canopy closes.”