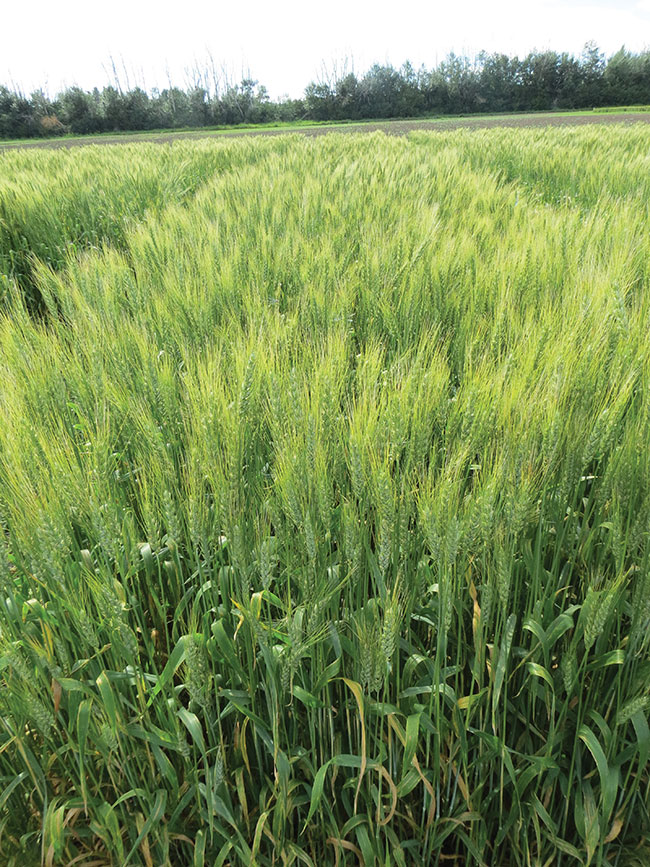 During the growing season, there are a range of factors and abiotic stresses including temperature and drought that influence crop yield and economic returns. Heat stress at wheat flowering, which is usually during the warmest time of the season on the western Canadian prairies, can cause significant grain yield losses. As heat stress conditions are likely to get more frequent and severe with global warming, it is important to get a head start on the research now to be prepared with more heat tolerant varieties. Researchers at the University of Alberta are working on developing both new agronomic management tools and improving the genetic abilities of wheat cultivars that are currently grown in Western Canada to help direct future efforts to maximize yield potential.

“The main goal of this project was to evaluate the detrimental effects of heat stress on wheat and to identify traits for heat tolerance and auxin responsiveness in hard red spring wheat varieties,” explains Jocelyn Ozga, professor, plant biosystems, University of Alberta (U of A). “The overall yield potential is influenced by the interaction of a number of factors including genotype, environment and management. We wanted to develop markers for heat tolerance that could be used by plant breeders to bring heat tolerance into their breeding lines.”

For the project, nine standard hard red spring wheat cultivars and a high yielding cultivar from CIMMYT “Attila” were assessed for heat tolerance with respect to grain yield. Researchers also assessed the parents of two randomly derived recombinant inbred line (RIL) populations from Dean Spaner’s wheat breeding program at the U of A and selected the RIL population derived from a cross between spring wheat “Attila” and the Canadian “CDC Go.” These RIL populations were very useful because they also had been assessed for genetic markers and in the field over a number of years in Dr. Spaner’s breeding program. This provided additional data for the project experiments to screen for heat tolerance and auxin responsiveness with respect to maintaining or increasing grain yield.

Ozga explains that for the experiments, the selected RIL population made up of 171 individual lines had one parent (“Attila”) that was heat tolerant, and the other parent (“CDC Go”) that was heat sensitive. The replicated experiments were conducted in growth chambers to control the timing and temperature of the heat stress treatments at flowering. High variation in heat tolerance was found among the RILs created from crossing Attila with CDC Go. This high variation indicates a good segregation of genes for heat tolerance in this population for identifying genetic markers for heat tolerance in wheat. Heat-resistant RILs that maintain grain yield under heat stress were also identified.

“As a result of these very intensive and time-consuming experiments, various genetic markers for quantitative trait loci (QTL) were identified for heat tolerance in wheat, which will be important information for wheat breeders,” Ozga explains. “We were able to provide information and tools that can be used to breed more heat-tolerant wheat at the flowering stage for the improvement and stability of grain yield.”

A second goal of the project was to further develop the use of the plant growth regulator class auxins as a tool to increase wheat grain yield grown under non-stress and abiotic stress conditions. The auxin selected, 4-Cl-IAA, naturally occurs in certain types of legumes such as pea and faba beans, but not in wheat. In a previous three-year study from Ozga’s lab, conducted in both growth chambers and field trials in Western Canada, six spring wheat cultivars exposed to heat stress at flowering were treated once with 4-Cl-IAA as a foliar spray at flowering. “The results of the field trials over two years showed an increased grain yield of six to eight per cent with 4-Cl-IAA application, but only in CDC Go in the more southern locations, where hotter temperatures occurred during flowering,” Ozga says. “It is important to note that the auxin 4-Cl-IAA used in these studies is still in the experimental stage, and will need regulatory approval before the compounds can be commercialized.”

In the current study, the same Attila × CDC Go RIL population used in growth chamber studies for heat tolerance was also tested for auxin response to increase grain yield. “Our results so far have been promising, but we do need to do further studies to identify genotypes that are sensitive to auxin treatments and determine the environments that an application would provide the most economic gain.”

Ozga is pleased with the new information and potential tools resulting from this project, including genetic markers that wheat breeders can use in breeding more heat-tolerant wheat cultivars. “We have also been able to provide further information on the use of auxins as a management tool to increase wheat yield. This potential crop enhancement management tool may have the ability to go hand-in-hand with current and future work on cultivar-specific responses to agronomic practices. By optimizing agronomic practices to each cultivar, producers can optimize yields while minimizing environmental consequences.”