Like growers in other countries, Canadian crop farmers have faced a surge in Northern corn leaf blight (NCLB) in the past seven to eight years. 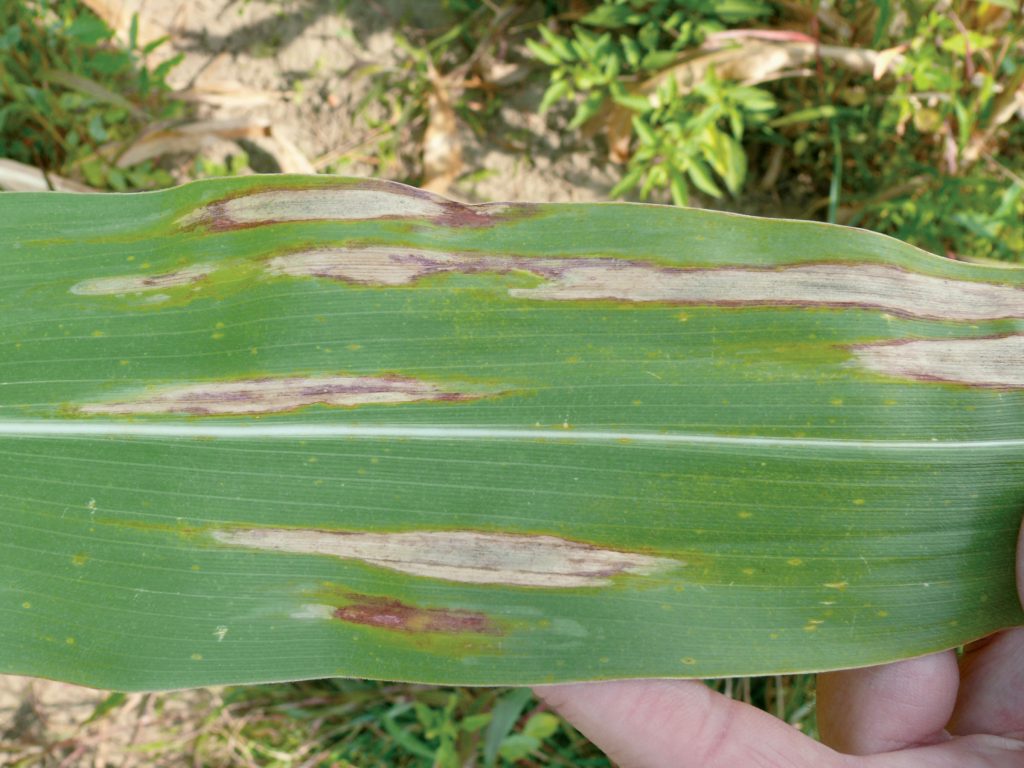 Greyish-green or tan streaks Like growers in other countries

This blight is caused by Setosphaeria turcicum, and it’s the most common and economically important fungal leaf disease of corn.

“Results of annual pest surveys of grain corn crops in the main corn growing regions of Ontario have indicated that NCLB is becoming a serious problem – and yield losses are consistently increasing every year,” says Albert Tenuta, field crop plant pathologist at the Ontario Ministry of Agriculture and Food.
Indeed, during the 2011, 2012 and 2013 crop seasons, the disease was observed in about 95 per cent of surveyed Ontario fields. Onset of NCLB before silking can cause grain yield losses of more than 50 per cent in very susceptible varieties. All of this means that the disease could continue to pose a significant risk to the grain corn industry for years to come.

The disease appears as long, elliptical, between two and 15 centimetres (one and six inches), greyish-green or tan streaks. Lesions most often begin on the lower leaves. As the disease develops, individual lesions may join, forming large blighted areas. In some cases, entire leaves may become blighted or “burned” and NCLB is often confused with Stewart’s disease. Losses due to Northern corn leaf blight are most severe when the leaves above the ear are infected at or before pollination. The fungus survives in corn residue as either spores or fungal strands (mycelium). The spores of the fungus are spread from the ground residue to the developing corn plant through wind or rain “splashing.” Infection occurs after a period of between six and 18 hours of leaf wetness, and therefore, disease development is favoured during prolonged periods of humidity or heavy dews when temperatures are moderate (18 C to 27 C). Plants that become infected act as a secondary source of infection and may spread to other plants or fields.

The past and today
Northern corn leaf blight first appeared repeatedly in different parts of the world in the early 1900s and caused huge losses, until a positive development occurred. In the 1960s, a single dominant gene called Ht1 was discovered and incorporated into hybrids. However, the resistance conferred by this gene didn’t last long, and the disease began its global rise again.

“The recent surge in incidence is thought to perhaps be due to the emergence of new races of the fungus,” Tenuta notes. “Thirteen physiological races of the fungus have been identified thus far, and some are more aggressive than others. However, little information was available on the occurrence and distribution of the races in this province.”

Tenuta and his colleagues (corn breeder Dr. Lana Reid and corn pathologist Xiaoyang Zhu, both located at the Agriculture and Agri-Food Canada (AAFC) Eastern Cereals and Oilseeds Research Centre in Ottawa), have performed a systematic identification of which NCLB races are present in Ontario, a mapping of where they are located, and a study of how the major corn genotypes handle the disease, in terms of more or less resistance. This has enabled them to identify resistant genes against prevalent physiological races for incorporation in breeding programs. “The knowledge we are gaining will also eventually help corn growers to select and grow appropriate resistant hybrids in their specific areas,” Tenuta notes.

Two reports have been presented by the scientists on the presence of different races of the fungus in Ontario. One was based on the variable reaction of hybrids in the Ontario Corn Committee Performance Trials at different locations, and the presence of resistant and susceptible lesions on the same plants at AAFC’s NCLB resistant breeding nursery in Ottawa. The other report outlines the interaction between different genotypes with various Ht resistance genes when exposed to spores collected from diseased leaf samples taken from different corn growing areas of Ontario and Quebec.

Reid and Zhu have developed a series of inbred lines having different resistance gene combinations against NCLB from isolates collected from around Ontario. Reid says the next step, pending funding approval, will see these lines tested in a greenhouse setting, as well as more molecular work being conducted to identify resistance genes.

When asked what growers can do to control their risk and manage Northern corn leaf blight, Tenuta says hybrid selection is critical. “However, if hybrid response is not as expected, this could indicate shifts in the spread of different races,” he says. “Fungicides are useful, but timing is very important. Scouting is important in noting if disease severity is increasing, and as a follow-up to fungicide application.”

Tenuta has noted variability in fungicide efficacy to the disease could indicate NCLB race tolerance to commercial fungicides, but this will have to be further investigated both in the lab and in the field.