There is no reason to be alarmed.  Just because research has shown that chickpeas do not fix as much nitrogen (N) as is exported in the seed, this doesn’t mean that chickpeas are bad for soil fertility or that you shouldn’t grow them.

“Almost all pulses do export more nitrogen than they fix.  Based on the literature, legume crops can fix about 70 to 80 percent of total N use.  The rest must come from the soil. It doesn’t matter how good fixation is,” explains research scientist Yantai Gan, at the Semiarid Prairie Agricultural Research Centre, Agriculture and Agri-Food Canada at Swift Current, Saskatchewan.
The scientist at Swift Current has studied chickpea fertility for many years, and published his most recent study on N dynamics in chickpea in the Canadian Journal of Plant Science.  In the study, he looked at the effects of cultivar choice, N fertilization, Rhizobium inoculation and cropping systems on N credits and N use efficiency.  The study also provides insight into fertility and cropping practices for both chickpea and the subsequent crop.

Four chickpea varieties were grown in the study. Amit is a small-seeded kabuli-type, CDC Frontier a medium-seeded Kabuli type, CDC Xena a large-seeded kabuli-type, and CDC Anna a small-seeded desi-type chickpea.  The varieties were sown on either tilled fallow, or no-till wheat or barley stubble. The no-till land had been in place for nine years before the study was initiated. Flax was used as a no-fixing reference crop.

N-fixation equivalent up to 112 kg/ha N fertilizer
In the study, the application of Rhizobium inoculant without fertilizer increased yield by 40 percent in the no-till barley system and 33 percent in the no-till wheat system, but only 9 percent in the tilled-fallow system. On average, chickpea inoculated with Rhizobium alone produced a yield level comparable to the yield of the crop fertilized at 112 kg/ha.
As fertilizer rates were increased, the amount of N fixed was reduced.  It took 56 to 112 kg/ha of N fertilizer to produce the same yield as when the chickpea crop was inoculated without fertilizer. Nitrogen use efficiency (NUE) also decreased as fertilizer rates were increased.

Export deficiency may be overestimated
Nitrogen balance was estimated by subtracting the amount of N exported in the seed less the N fertilizer and N-fixation inputs.  One missing piece in the study is that it did not take below ground parts of the chickpea plant into consideration when calculating N credits and NUE.

“Growers might be shocked that growing pulses actually has a negative N balance but the wild card is how much N is left in the soil by crop straw, roots, dead nodules, and rhizo-deposit (i.e., materials released from roots during the cropping period).  That is quite difficult to measure, but there is a way to make estimate,” says Gan.  “There are studies in Europe that show that when the pulse root decomposes, it produces a lot of N in the soil”. “Also, studies at Swift Current have shown that chickpea roots release enzymes during the process of nodulation and N-fixation, and some of the enzymes, such as hydrogen oxidizing enzyme, interact with soil microorganisms in the rooting zone. As a result, it increases soil microbial biodiversity and beneficial microorganisms. That is one of the reasons why we see pulses providing a consistent benefit to the subsequent crop.”

Gan summarizes that while his most recent study shows that more N is exported from the soil than fixed, that optimum productivity and N benefits can still be achieved.  Growing chickpea on low-N stubble fields and using Rhizobium inoculants is recommended to improve the NUE of the crop and for achieving high yields. 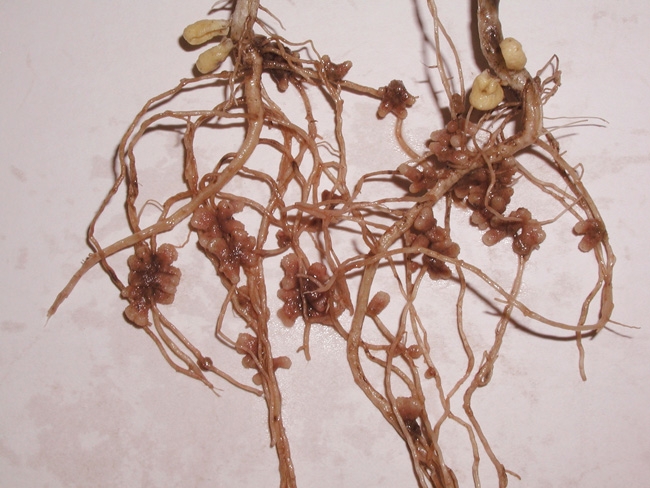 Chickpea inoculated with Rhizobium alone produced a yield comparable to a crop fertilized at 112 kg/ha. There is no reason to be alarmed. Just because research has shown that chickpeas do not fix as much nitrogen (N) as is exported in the seed
Print this page