About a decade ago, Kyle Folk was at his parents’ grain farm helping his dad load up a semi of canola to meet a contract when the two made an unpleasant discovery. 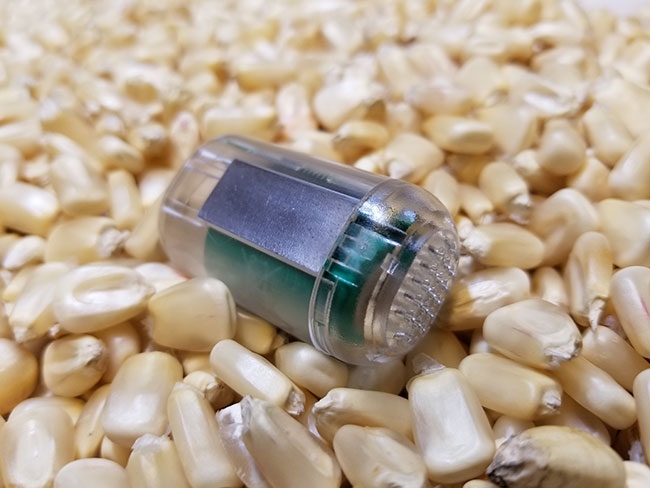 A prototype of Amber Agriculture’s pellet-sized wireless bin sensor. About a decade ago

“We went to put the auger in the bin and realized the grain was spoiled,” Folk says. At the time, Folk, who was running an electrical contracting business, says he didn’t know that spoilage could happen on such a scale. “People didn’t talk about it.”

“When the dust settled I asked my dad, ‘Why don’t you monitor this?’ He explained what was available on the market, and told me that he’d always felt that he could check it manually. He’d go up to the top and smell, or he’d shove a piece of rebar in and feel if it was hot.”

“His mindset was similar to that of a lot of producers [in the area]. That blew me away, because you assume all that risk with uncontrollable factors like the weather. You roll the dice.”

“I came from the farm and I designed this product so that it gives the needed information but in a simplified manner – you have all this data, but it’s usable,” Folk says.

These days, the company manufactures the product but doesn’t sell it directly; retailers sell the hardware while IntraGrain maintains the software and charges data fees.

“We have quite a few clients throughout Western Canada and even northern B.C.,” Folk says. “We’ve also started selling outside of Canada: in the U.S., Mexico, Australia and Southeast Asia.”

Although the company and its partners collects data on stored grain from farmers, their agreement with customers stipulates that they will not sell that data to any third party, which Folk says protects farmers. “As the clock turns and more and more people monitor grain, it could be a very delicate and dangerous situation for producers,” he says.

Cable-free monitoring
Integrated systems like Bin-Sense can offer peace of mind to farmers with a great deal of stored grain or grain in multiple locations. However, cable-free monitoring is also an option for producers managing smaller volumes of grain, or for use as a back-up monitoring tool.

The probe, which requires no installation, contains an infrared sensor near the tip that provides instant temperature readings that farmers access on their smartphone. The connection between the probe and the farmer’s phone is closed-looped and doesn’t require cellular reception or an Internet connection.

“This is something for farmers maybe renting bin space or using grain bags,” says Jason Diehl, vice-president at Dimo’s. “It gives them flexibility to probe anywhere they want in the bin.”

But hand-held probes are only the beginning in terms of cable-free grain bin monitoring, and a Chicago-based startup is about to take another step forward.

Amber Agriculture, which began as a student-run initiative out of the University of Illinois, is currently testing the prototype of a pellet-sized wireless sensor that can capture temperature, humidity, carbon dioxide and organic compound volatile readings from stored grain.

“The sensors can be tossed in at the truck, auger hopper, or anywhere, to flow and distribute with the grain as the bin is being filled,” says Lucas Frye, co-founder of Amber Agriculture. “They are built to take a beating. On the outflow, they can be recaptured with an auger attachment mechanism.”

Installation of the system is relatively simple, Frye says, and takes only 15 minutes. To install, producers drill a hole at the top of the bin for a wireless receiver hub that sits on the roof, collecting information from the individual sensors in the bin.

Frye says the product is designed to meet the needs of farmers frustrated with cable-based systems with “big sticker prices” and extensive installation and maintenance requirements.

Amber Agriculture spent several months prototyping and sourcing components for the product in Shenzhen, China, but the company is now based in Chicago, Illinois. Frye says farmers across Canada and the U.S. Midwest are testing out the technology during the 2017-2018 storage season and the company plans to roll out the product in batches starting in 2018.

NEW! 3D mapping moisture content
A newly developed grain bin monitoring system is utilizing medical imaging techniques to build a real-time 3D map of the moisture content in your grain. GrainViz allows producers to accurately see the moisture content of every individual bushel and its location in the bin, allowing you to understand airflow patterns and proactively manage trouble spots before any damage to grain occurs.

Using a series of sensors on the inside wall of the bin, GrainViz gives you real time insight, data and the ability to monitor 100 per cent of your bins contents. The state-of-the-art secure portal provides customers with the opportunity to set conditioning parameters, create alerts and control fan operation from anywhere in the world. Producers are able to manage moisture content across crops, ensuring the highest grain quality while reducing your overall energy costs.

“Having visibility of the inside of your bins at all times allows you to safely store more grain and reduce the need and cost of many smaller sized bins. Less time spent drying in the field reduces its risk exposure to the elements and quality degradation resulting in a higher quality commodity and maximized returns,” says Boyd Koldingnes, vice-president of sales and marketing with GrainViz. “In addition, this system also provides detailed inventory management and reporting, grain weight, insect detection in real time before they become a problem and integration into your existing precision agriculture platform. The results are profound; enhanced commodity quality, higher profits and your peace of mind.” For more info, contact bkoldingnes@grainviz.com.